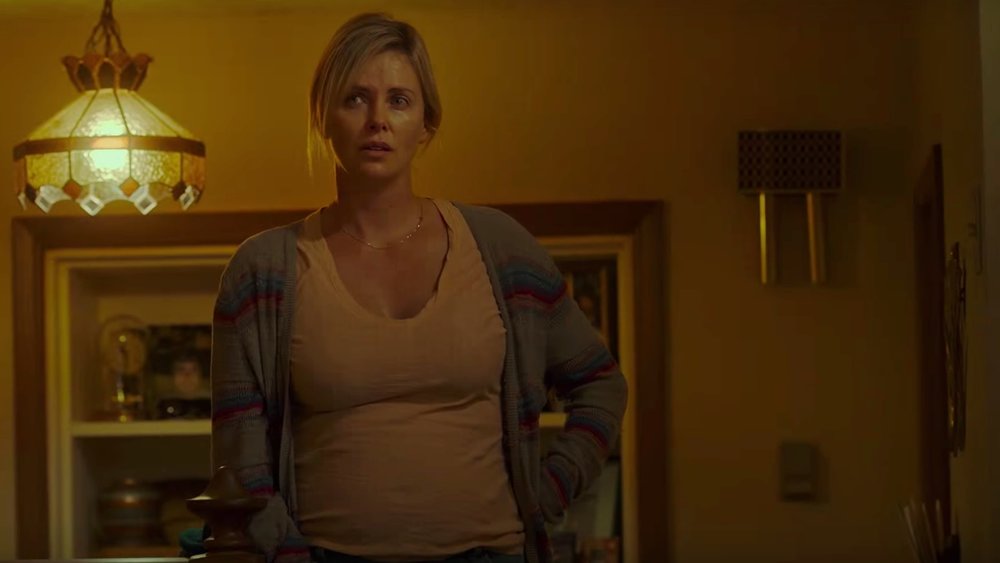 One of the funniest routines Robin Williams ever spouted exposed the fallacy of men who believed that, with a bit of effort and empathy, they could understand what women go through when giving birth. “You’re along for the ride!” he declared.

How right he was, of course. What Williams highlighted was that however hard men might try, they inhabit a different world to women, especially when it comes to kids.

That’s the essential premise of the unusual, piercing drama Tully, easily one of the punchiest films about the non-stop stresses involved in motherhood.

Marlo (Charlize Theron) is a heavily pregnant suburbanite who is already dealing with two young children, one of whom has a form of autism that continually pushes Marlo’s temper to breaking point.

After the birth things only become more hectic for her as the concept of a good night’s sleep becomes a distant memory. She is up at all hours tending to her wailing new charge, constantly wondering how long she can cope.

Along for the ride is husband Craig (Ron Livingston), a reliable bread winner and provider who seems like a perfectly decent man but for his preference for playing video games over spending quality time with his stressed-out wife.

More naive than neglectful, Craig is the instantly recognizable man-child archetype we’ve become familiar with since the 1990s thanks to TV shows such as Seinfeld, Friends and the Adam Sandler/Judd Apatow/Will Ferrell-lead comedy blizzard.

While visiting her well-to-do brother  (Mark Duplass) and his all-but-perfect wife (Elaine Tan) Marlo is introduced to the idea of bringing in a “night nanny” to lighten the load. She’ll take care of the baby in the small hours while Marlo gets some much-needed rest. It sounds like too good an idea not to at least try.

Thus appears Tully (Mackenzie Davis), a beautiful, sprightly young woman who one night materialises before Marlo with more enthusiasm, maternal instincts and love for her job than anyone could wish for.

And so Marlo’s life begins changing for the better. As she bonds with the tireless and ever-patient Tully, Marlo catches up on her sleep and the thousand-and-one other things she’s been neglecting. Never mind postpartum depression, she’s got cupcakes to make.

Yet something underlies this change, and it involves a well-deployed device we’ve seen before in movies that makes us rethink the movie we’ve just seen.

In this case it works extremely well, thanks largely to the remarkable, convincing performance Theron puts in. As with her Oscar-winning performance in Monster (2003), here Theron discards her Amazonian, model-taut physique by gaining enough weight to make her look like a woman who has just had a child.

Tully is the latest collaboration between director Jason Reitman (Up in the Air), writer Diablo Cody (who wrote Juno for Reitman) and Theron (the trio did the vastly underrated Young Adult in 2012) and joins the long line of films that show just how hard motherhood is.

One of the good things about films such as Tully is that it gets a public conversation going about its topic. Invariably, however, the response from various groups is always adversarial.

So sure enough, and despite its clearly good intentions, the film has come under fire from certain parenting groups for supposedly failing to cover this issue and that issue and the issue over there.

This happens all the time. A film comes out dealing with an issue and suddenly every interest group starts griping about why the film didn’t cover some specific aspect of the issue that wasn’t in the film.

It’s one of the most predictable and silly spectacles we see occur around films. It’s as though some people can’t tell the difference between a movie and a six-hour documentary.

Surely the more sensible thing to do is embrace the fact that a film like Tully has brought an important issue into the public arena and use it to raise other related matters.

But – sigh – it is the weary way of the world today to react to everything with venom – thanks chiefly to the low standards set by social media. Still, why discussions can’t take place without such hostility remains a mystery.

The attacks on Tully are as though it is downplaying the stresses of motherhood, which is precisely the opposite of what this excellent film does.

In July 1969 while former President John F Kennedy’s epochal dream to land a man on the moon was being realised, his brother Ted was living out a nightmare on Martha’s Vineyard.

With plans to run for president and continue the legacy of his two slain brothers – JFK was gunned down in 1963; Robert in 1968 – Ted had the misfortune on 18 July of driving his car off a bridge and into the water. With him was Mary Jo Kopechne (Kate Mara), a hard-working aide. She was stuck in the car while Kennedy escaped.

Kennedy’s subsequent behaviour immediately after the crash has been the subject of conjecture ever since, and director John Curran’s excoriating, engrossing account of the accident and its aftermath is unlikely to change anybody’s opinion of politicians as duplicitous, self-serving cretins.

Australian actor Jason Clarke does a great job with his portrayal of Ted as a monumental buffoon who pushes his massive support team to breaking point.

In terrific support are Ed Helms (The Office) as a loyal fixer, Clancy Brown as Robert McNamara and, in a brief but powerful turn, Bruce Dern as Kennedy patriarch Joe.

In perfect counterpoint to all the dark dealings is the vivid, upbeat period detail, with guesthouses, cars, yachts and rich young people all illuminated by the sun-splattered cinematography of French veteran Maryse Alberti (The Wrestler; Creed; Happiness).

Special credit also needs to go to the producers who stood by what was obviously a contentious title.

While the mention of Chappaquiddick will instantly resonate with those who remember the event and with history buffs, for many it will mean nothing –  until they see the film. That was obviously the rationale and it’s good to see that degree of bravery in such a risk-averse business as film.