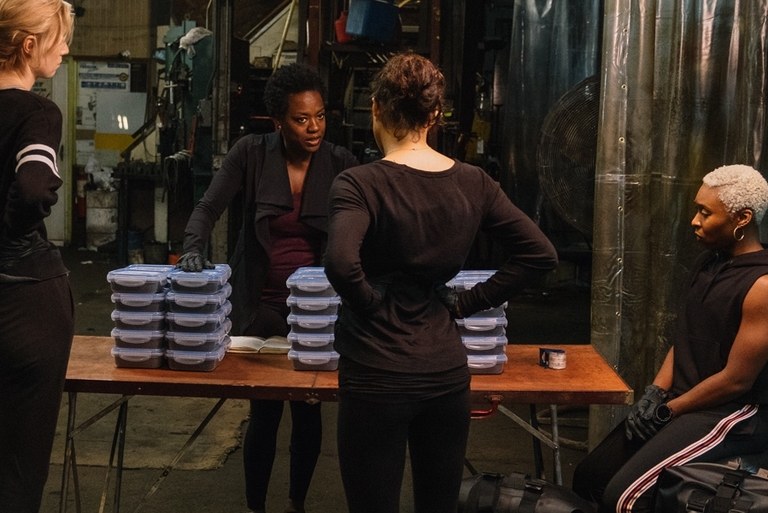 The most desperate is Veronica (Viola Davis), whose husband Harry (Liam Neeson) was the leader of the gang and, as it turns out, the most duplicitous.

Not long after the funeral Veronica is visited by a no-nonsense debt collector who cheerily informs her how Harry owed a big chunk of change and that she has a month to cough it up. The consequences of her not doing so are implied through the use of her beloved pet dog.

When she comes across Harry’s notebook, Veronica discovers how he kept detailed notes and plans on everything he did and was wanting to do, including a huge robbery they were scheming on pulling next.

For Veronica, the great thing about the job is that it more than covers her debt by several million. The downside is that she’ll have to do it with the help of the other widows, each of whom are also in need of a big cash payoff.

There’s plenty of motivation and almost no smooth sailing with their preparation as the increasingly hectic Veronica races to meet her deadline.

Complicating matters no end is the involvement of a local politician (Colin Farrell), who is trying to honour the legacy of his crotchety father (Robert Duvall) while dealing with his rival (Brian Tyree Henry), whose campaign funding arrangements entwine with Veronica’s troubles.

With Davis (The Help; Fences; Doubt) at the centre of a solid ensemble that includes Elizabeth Debicki, Michelle Rodriguez, Carrie Coon and Cynthia Erivo, Widows registers as a highly entertaining heist movie with a few choice action sequences that even the fans of the Lynda La Plante novel or the 1983 British mini-series will enjoy.

And please don’t be late for the opening segment. It’s a knockout, a great example of grabbing the audience by the lapels and demanding they pay attention.

The latest stab at one of England’s favourite folk heroes is a deliciously punked out, hyped up, super-charged action flick that goes into the backstory of the Robin Hood myth before he headed into the woods with his Marian and his Merry Men.

Wildly anachronistic with archery weapons that fire with the ferocity of automatic weapons, the handsome Taron Egerton (Kingsman; Eddie the Eagle) plays Robin, who we meet as a nobleman of Nottingham with a big house and his beautiful female companion, Marian (Eve Hewson).

Conscripted to fight in the Crusades, Robin of Loxley, as he is known, does his noble, violent duty only to return to find his property confiscated and Marian with another man, a result of her being told that Robin had been killed.

He also sees how the population of his beloved hometown is being oppressed by the wicked Sherriff of Nottingham, a corrupt proto-Nazi who loves squeezing his subjects  for taxes and who wears a remarkably Nazi-like overcoat (never mind that this film is set several hundred years before such Fascist wardrobe items were a thing.)

Playing this bad guy is the ever-reliable Ben Mendelsohn, who brings to his delicious villainy that signature scenery-chewing schtick we saw on glorious display in Ready Player One and Star Wars: Rogue One. Mendelsohn does meanie very well, especially when he dials down the nasty instead of dialling it up.

Showing a deep love for fast cutting and slow motion, director Otto Bathurst (Peaky Blinders) mounts some splendid action sequences, making some of them look like raw war news footage from the Middle East. At other times he stages cross-bow fights to make them look like ballet. There’s fireballs, fury and blood, but also a weird kind of beauty to this carefully orchestrated mayhem.

It’s all cheesy to the hilt, to be sure, a vibe that’s set up in the first reel of the film. If you don’t respond to it, you’re likely to fall in line with the majority of critics who have given this fun flick the thumbs down. (Do we now have a generation of critics that don’t understand popcorn films?)

Hook into the crazy swing of the film, however, and you’re in for a sweet ride, with treats that include Jamie Foxx as Little John, Australian comedian Tim Minchin as Friar Tuck and veteran F Murray Abraham (Oscar winner for Amadeus, don’t you forget) as the Cardinal who gives good Christians a bad name and the film, which promises a sequel, a vengeful axe to grind.

After all, who better to rob on behalf of the poor than the church figures who steal from them?

A remarkable first feature from Australian  director Alena Lodkina drops a young woman (Kate Cheel) in the remote opal-mining community of Lightning Ridge where she tries reconnecting with her ailing father while trying to sort out which direction her life will head.

Directed with a fine eye for stillness and subtlety, the emotional tensions build slowly as she tries figuring out how or if she fits into the very masculine, distinctly Aussie home she is being welcomed into. There are terrific, naturalistic performances all around, especially from Cheel and Daniel P Jones (Rain) who plays her no-nonsense father.

As with too many Australian films, Strange Colours has dropped into cinemas suddenly and with almost no fanfare. Regrettably, it is likely to drop out in much the same manner.

It’s one tradition of modern Australian cinema we can well do without.

After controversially ruling that a hospital can save the life of Adam (Fionn Whitehead from Dunkirk), a teenage boy suffering from leukemia, despite the religious objections of his parents, an English High Court Judge becomes the object of his swelling infatuation.

As the respected, conflicted judge, Emma Thompson puts in a deftly nuanced performance – stern yet compassionate at work, fragile and vulnerable at home where she learns her lack of intimacy has thrown her marriage on the rocks as her academic husband (Stanley Tucci, in fine form) announces his intention to have an affair.

Adapted for the screen by the author of the best-selling 2014 book – the prolific, film-friendly novelist Ian McEwan, best known for  The Comfort of Strangers, Enduring Love, Atonement and On Chesil Beach, which McEwan also did the screenplay for – director Richard Eyre (Notes on a Scandal) is a little clumsy in handling the ethics of the issue at the heart of the drama, the parents (played nobly if briefly by Ben Chaplin and Eileen Walsh) being largely iced out of the proceedings.

Still, Thompson shines as the heart of the film, her increasingly troubling confrontations with Whitehead conveying the transformative power one person can have on another.

THE NUTCRACKER AND THE FOUR REALMS *** (99 minutes) PG

In much the same vein as Beauty and the Beast comes another sumptuous Disney serving of glossily over-produced fantasy, this one an adventure rather than a romance as it retells the classic tale of The Nutcracker. Think of cinematic Christmas cake, with lots of icing and several tiers, a movie form of which Disney has long been master, though with varying degrees of success.

As mass-market confection, Nutcracker certainly works well enough, though its delights definitely hark more from style rather than story.

During a giant Christmas party, Clara wanders off into a Narnia-like world where she finds herself at the centre of a war between four magical realms, the resolution to which is within her power.

Despite its visual splendour – including big tin soldiers and the singular vision of a giant mouse made up of thousands of tiny mice – there’s an awful lot of narrative to follow that might prove too much for restless kids, especially when the film pulls its plot twists. (How closely do kids follow the plots in blinged-out films such as this anyhow?)

Still, Kiera Knightley sparkles as the Sugar Plum Fairy and Morgan Freeman chips in with a nice turn as Clara’s godfather, who gets the  plot going when he gives her a special present from her mum.

Oddly, there’s a nod in the film to Fantasia, made by Walt Disney in 1940. What be the meaning of this? It’s hard to figure out what accounts for such a pointed reference. Back then, in the nascent days of the studio, Disney was invested in innovation to a much greater degree than it is today, with all its sequels and remakes.