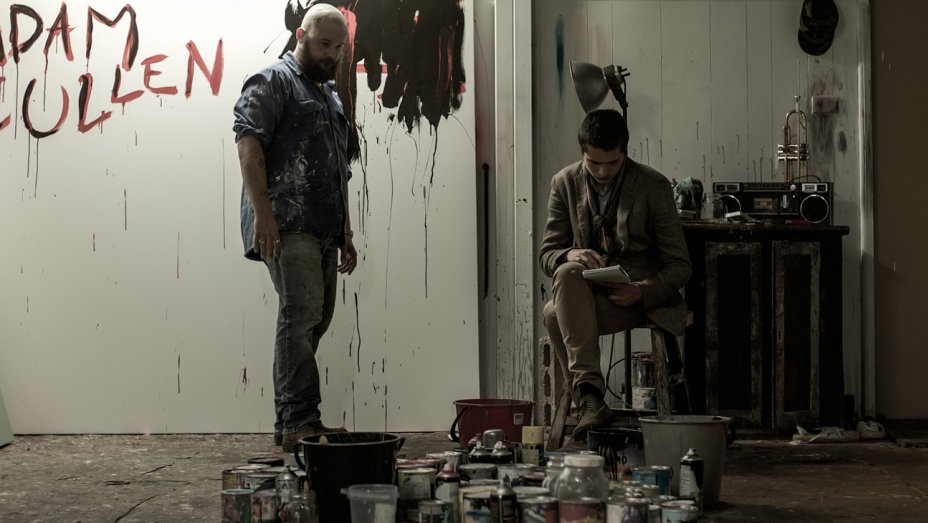 With an eye for detail as exacting as his subject’s, actor/director Thomas M Wright (Balibo; Top of the Lake) presents a jagged profile of artist Adam Cullen (splendidly portrayed by Daniel Henshall from Snowtown) as he follows the attempt by young reporter Erik Jensen (Toby Wallace) to capture his hand-grenade personality in a biography.

Based on the book by Jensen, the film is full of rich imagery and insight, Wright’s subtle direction examining the truths that lurk beneath the artist’s skin.

The tortured nature of the relationship between Jensen and Cullen is a compelling cocktail of suggestion, with narcissism, masochism and frustrated sexuality all in the mix.

Equally chilling, Cullen’s love of guns, swastikas and his propensity to violence reflect a disturbing psyche that sought expression beyond art.

Acute Misfortune is an arthouse film about an artist, superbly done with top-notch performances and evocative cinematography that bravely uses the old 4:3 ratio to great effect.

In the midst of a busy promotional schedule Thomas M. Wright met with us for a chat at the spacious – if rather noisy – Port Melbourne office of Arenamedia, where his producer, Bob Connolly (who directed Wright in Balibo) was in the middle of editing his next big film The Dry, starring Eric Bana.

Wright spend seven weeks shooting the film, during which Daniel Henshall lost an astonishing amount of weight to reflect the changes in the artist’s life over four years.

See below to view a trailer for the film.

For the third – and definitely not the final – time, marked man John Wick (Keanu Reeves) returns to blam his way through yet another ultra-violent, shoot-em-up extravaganza, complete with all those impressive signature fight and chase sequences cleverly dressed up by digital magic to make them look like they were filmed in one take.

For the sake of something new, some German shepherds are added into the action, as is Halle Berry who has been missing in action from the big screen for a while. Fans of the first two Wick epics will have no complaints, thanks to the action being as superbly mounted and the sparks of humour being as straight-faced.

Director Chad Stahelski, who made the first two, certainly knows how to stick with what works.