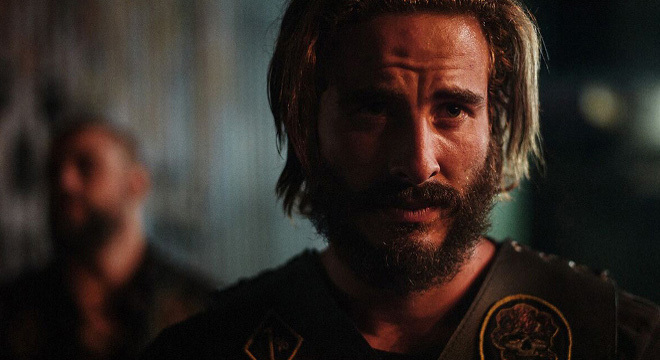 The bitter battle for the leadership of an outlaw motorcycle club is at the rapidly throbbing heart of 1%, a blistering, unflinching, full-throttle drama about how the crashing of egos and ambitions can bring out the most toxic behaviours in men and women. And the consequences are not pretty.

On the verge of being released from prison after a three-year stretch, Knuck (Matt Nable), the leader of the Copperhead Motorcycle Club, is warned by his loyal wife Hayley (Simone Kessell) about Paddo (Ryan Corr), his second-in-command.

In Knuck’s absence Paddo has been diligently building the club’s membership and taking care of its finances. And as fortune would have it, a lucrative business deal has come his way through an unfortunate circumstance.

Paddo’s mentally-slow brother Skink (Josh McConville) has transgressed against a rival club, and its leader Sugar (Aaron Pedersen) wants blood, yet he is willing to make a deal. Sugar will spare Skink if Paddo can get Knuck to agree to a deal. This entails Sugar’s gang using its legitimate business holdings to launder the dirty cash the Copperheads have lying around in useless piles.

And for a cut of 30% it’s a very attractive offer. Paddo sees that, as does his girlfriend Katrina (Abbey Lee), a sharp, street-savvy, power-hungry lass who keeps pushing Paddo to stage a coup.

But Knuck’s return sees him eager to follow Hayley’s advice and assert his authority. So the deal is quashed and Knuck reminds everybody about who is in charge. Sugar then reminds Paddo that, with no deal in place, Skink will be killed.

But Sugar doesn’t want trouble. Like many crims throughout movie history he just wants to do business, only Knuck is in the way. Paddo knows what he’s being told to do. Katrina sees the sense in Sugar’s offer, and sees the same solution.

At a time when everybody is consumed by discussions about dysfunctional leaders and the abuse of power, director Stephen McCallum and Nable, who also wrote the screenplay and played a motorcycle gang leader in the mini-series Bikie Wars: Brothers in Arms, offer an unintentionally timely and highly dramatic dichotomy.

Paddo sees his leadership role as that of a steward whose responsibility and obligations are to the organisation and its members. Knuck, however, regards leadership as ownership, where the organisation is there to serve his interests and his ego, and where his values come before everybody else’s.

It’s not hard to see how the film’s portraitures of power offer some pretty piercing commentary about the quality of leadership in the United States and especially Australia, where Knuck’s model seems to be finding great favour.

To their credit, the makers have made the females as complicit in all the  manipulation and dirty play as the males. And as strong as the performances are from Nable and the versatile Corr (unrecognisable here from his turn in Ladies in Black) it’s Kessell and Lee who prove most compelling.

Far from being mere bikie molls, they’re aware of the power structure they’re in and know what buttons to push to get what they want, their toxic femininity easily as acidic as the toxic masculinity eating away at the club’s survival.

As an added dynamic, rumours over Knuck’s true sexuality underpin the story and play havoc with his self-image as leader. Offer him a lady’s drink as a joke and he’ll deck you.

But will it find one?

As Fate would have it, 1% has been released sandwiched by two big, Oscar-baiting Hollywood films: First Man, which started last week, and A Star is Born, which shares opening day with 1%. Both these movies have been critically acclaimed, are backed by mammoth marketing campaigns and are drawing huge audiences.

Now, it’s not unheard of for small films to thrive alongside the release of big films but the odds here seem stacked against it. 1% is the latest Australian film to be released without much fanfare and one hopes word-of-mouth will help it connect with audiences the way Ladies in Black has.

Given how the situation from Hollywood is not going to change, too much is still being left to chance when Aussie films hit the screens. Here’s hoping 1% finds its way through to the audience it deserves.

Director Stephen McCallum and actor/writer Matt Nable took some time out recently to chat about the making of 1%.

Please enjoy – but take note these lads are prone to the odd cuss word, just like the characters in the film.