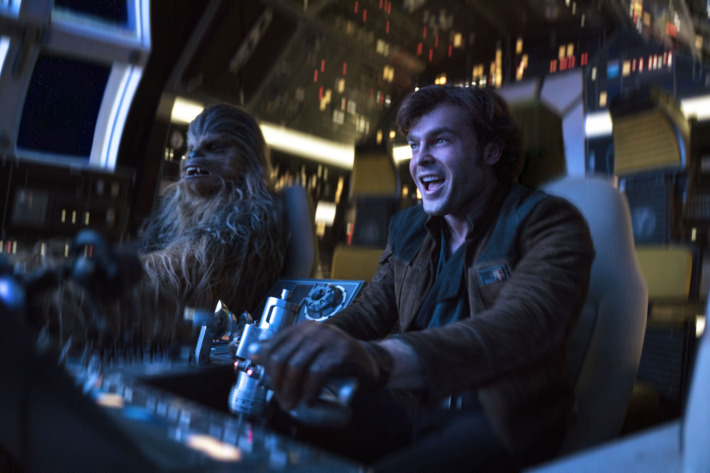 Though it often looks a little too much like too many other big-scale fantasy films, the origin story of Star Wars’ space buccaneer Han Solo – made famous by Harrison Ford (and who doesn’t know that by now?)  – is a solidly entertaining space adventure with a mind of its own.

For though Solo technically takes place in the Star Wars universe there are only scant references to the other films. There’s no mention of Darth Vader, the Dark Side, the Death Star, The Force, Obi-Wan or even Ewoks. It’s certainly more of a “stand-alone” film than Rogue One, which was so soaked in the known saga it was essentially Star Wars: Episode 3.5.

We meet Han (played with varying degrees of conviction by Alden Ehrenreich) before he became a pilot and learn how he got into the pirating trade via Tobias Becket (Woody Harrelson, making a meal out of his main role).

Crucially, we learn how he was motivated by his love for Qi’ra (Game of Thrones fulcrum Emilia Clarke) and his disdain for the film’s resident nasty, the rather charming, if lethal Dryden Vos (played with villainous relish by Paul Bettany).

There are the inevitable meet-cutes with Chewbacca and Lando Calrissian (Donald Glover, not the son of Danny, and also known as the musical act Childish Gambino), though the most moving coupling is his union with the Millennium Falcon, the space freighter that has arguably become the most beloved space ship in film history.

Oddly, much of the action in Solo is earthbound, and while Star Wars films have often done something amazing with visual effects, there’s nothing here that really sets it apart. There are some nifty battles, space chases and an elongated train robbery sequence, but that wonderful impulse to do something visually remarkable is absent here.

Perhaps the closest is the robot L3, a self-aware, sarcastic social justice warrior voiced by British actress Phoebe Waller-Bridge, from the sitcom Fleabag. And though it’s a robot, the designers clearly want you to know its female.

Another strange thing in this film: what happened to the stars? You don’t really see many until the end credit crawl.

And it’s a decidedly murky world. For some reason, about 70% of the film is cast in this muddy hue, as though being filmed through a stocking. Up until the final reel, when the sun is finally let into the film, it’s a pretty dank, overcast universe.

Even when space ships get involved everything is enveloped in clouds and mist and colliding planets, with barely a star or a decent light source in sight.

Thankfully, Han and Chewie’s signature jump to light speed features a lovely starfield, but the film’s look is largely unattractive, despite the usual high standard of design work, with Dryden’s ship cutting an unusually elegant figure.

Though the film is stacked with subplots, it thankfully maintains focus on a main storyline that, in contrast to most big post-content films these days, keeps things from getting cluttered and confusing.

This might have something to do with the clear vision of veteran Star Wars screenwriter Lawrence Kasdan, who co-wrote this with his son Jonathan. With the legendary Leigh Brackett, Kasdan also co-wrote The Empire Strikes Back (1980), which is now secure as the most literate of all the Star Wars films, and you can feel that love of story in the final reel of the film.

For it’s in the finale where the stakes are raised and character integrity is tested. It really sells this adventure as a cut above.

And, apparently, we should be counting our blessings, because it could have been a lot worse.

Though the film is credited as having been directed by veteran Ron Howard (A Beautiful Mind; Apollo 13), he was brought on three weeks before the end of scheduled production after the original directors, Phil Lord and Christopher Miller (The Lego Movie) were fired.

According to reports, producer Kathleen Kennedy and Lawrence Kasdan took a look at footage after most of the film had been shot – and they did not like what they saw.

Lord and Miller were using a lot of improvised dialogue and were making the film far more comedic than the screenplay dictated. As a result of “creative differences” they were replaced by Howard, who dutifully made the film the studio wanted, using up those extra weeks factored into the production schedule that are there to deal with just such a contingency.

Oversight is obviously an issue with these films. Deep into the shoot on Rogue One, director Gareth Edwards had to be pulled into line for making a film that was too dark. Many expensive reshoots were required.

Is this dictatorial studio interference? Of course it is. And rightly so. Raise your own money and pool your own resources and you can do whatever you like. But once you sign onto a project, you are obliged to deliver what’s expected.

Nobody knows what Kennedy or Kasdan said to the directors before they were fired, but one imagines it was something along the lines of: “we hired you to make our film, not to make your film.”

Word is that Lord and Miller refused to adjust their vision sufficiently, and thus their names appear in the end credits as executive producers.

Here’s hoping Disney and Lucasfilm are brave enough and smart enough to put together a great behind-the-scenes documentary featurette for the DVD about all this.

Fans of the classic 1986 Rodney Dangerfield comedy Back to School might feel a little peeved at how blatantly Melissa McCarthy’s new comedy riffs on the idea of a parent going to the same college as their kid. But that’s the only real similiarity here.

Again directed by husband Ben Falcone (who also made Tammy and The Boss with her), McCarthy plays a middle-aged fortysomething woman who is dumped by her husband for a wife “upgrade” (Julie Bowen from Modern Family) before deciding to go back to her old college where her daughter (Molly Gordon) is enrolled.

Her plan is to finish the course she dropped out of for the sake of her family, but she really spends most of her time dispensing advice and being an upbeat, positive role model to her daughter and her friends.

McCarthy is a warm comic presence here and proves how her improvising is at its best when she’s not trying to be dirty.

As with Amy Schumer’s I’m So Pretty, this is a message-driven comedy for young teens designed to bolster self-confidence, attack bullying and demolish body shaming.

As such, McCarthy’s plus-size character finds herself the sexual object of desire for an attractive young student (Luke Benward), who can’t get enough of her.

This is part of a growing trend where big women, such as Rebel Wilson (Pitch Perfect) and Etta (from Parks and Recreation), are regarded as conventionally attractive, with no attention drawn to their size.

Benward certainly deserves kudos for the zest he puts into his performance. He’s as hot for McCarthy as he would be for a cheerleader.