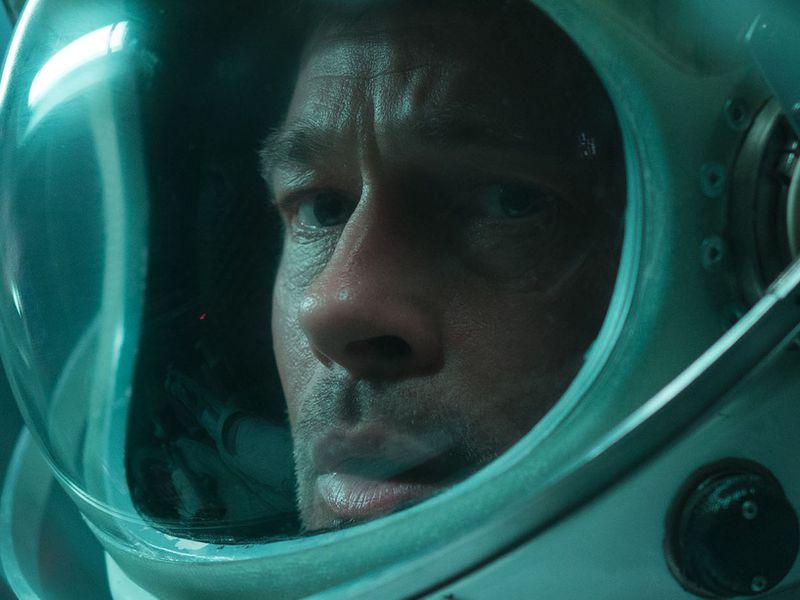 In James Gray’s haunting, slow-paced, superbly mounted space epic, Brad Pitt ventures into the grand void as astronaut Roy McBride, a talented yet forlorn soul in search of his father (Tommy Lee Jones), a space pioneer who has been lost, presumed dead, for some 16 years amidst the orbital rings of Neptune.

As eloquent a resting place as that sounds, the experimental anti-matter fuel the ship was using is now sending disruptive beams back home, playing haywire with electrical systems.

So somebody needs to go back to blow the ship up and Roy seems uniquely qualified, both technically and because the incomplete account of what went wrong with the mission has lead to a sneaking suspicion his old man might still be alive – and has gone nuts. So, if that turns out to be the case, who better to talk him down than his long-lost son?

Visually, this is a film designed for a huge screen. Gray and his crew have done a great job creating a near-future vision of interplanetary space travel, elaborate moon bases and thunderous rocket launches.

With a measured pace so you can soak in all that detail, cinematographer Hoyte van Hoytema (Dunkirk, Interstellar) delivers an immersive, Oscar-worthy experience.

Complementing this perfectly is Pitt’s subdued, magnetic performance. He’s a man in need of answers whose disciplined nature can trigger a resolve and a call to action that can put others at risk.

The visceral feel of recent films such as Interstellar, Gravity and The Martian mark the super-high standard of the film’s effects and cinematography. Echoes of Stanley Kubrick’s 2001, the grand-daddy of all space movies, permeate the film.

Without ever getting ponderous or pretentious, the film does provoke some deep thoughts about deep space, including a few nods towards the notion of a higher being, which the film suggests is unavoidable when plunging into the cosmos.

Gray also posits, through McBride’s often contentious behaviour, how space can either invite speculation of limitless possibility or appear as an abyss where no hope is possible.

That Gray pulls this off while attending to the need for awe and spectacle helps make Ad Astra a space journey definitely worth taking. Just be sure to see it on the biggest screen you can.

Yet Abominable is supremely well done and gorgeous to look at, with a loveable central character who continues the trend of showing monsters as merely being critters who are out of place.

The specifics involve Chinese girl Yi (Chloe Bennet) and a giant, fuzzy Yeti who has escaped from captivity and is heading back to Mount Everest. In hot pursuit across an increasingly cold landscape are semi-evil scentist Dr Zara (Sarah Paulson) and her industrialist employer Burnish (voiced by British actor/comedian Eddie Izzard).

As our heroes near their destination, the magical powers possessed by the giant become stronger and begin playing a bigger and bigger part in the story.

Writer Jill Culton, who co-directed the film with Todd Wilderman, cut her teeth on early films by Pixar and Sony (she made the first Open Season movie), and keeps the action moving while managing to develop her main characters, which also include Yi’s friend Peng (Albert Tsai) and especially her vain-glorious cousin Jin (Tenzing Norgay Trainor) who comes in for a big life lesson.

Since Dreamworks hit big with How to Train Your Dragon in 2010, the studio’s films have become  known for the heart and emotional potency that was once the preserve of Pixar.

Indeed, Abominable is the latest non-Pixar film to reflect the best qualities of Pixar’s early films – you know, the ones they made before they became preoccupied with sequels and bland misfires such as The Good Dinosaur.

As well as being uplifting, heart- warming and ever-so-cute, Abominable is also a sign of where mainstream film is headed.

Abominable is a co-production between Dreamworks and Pearl Studio, an animation studio set up by Dreamworks (originally brandishing the slightly awkward title Oriental Dreamworks) to service the rapidly growing Chinese movie market, which absolutely loves movies from the West, especially American ones.

The growing symbiosis between the two cultures through such co-productions is only set to grow as China’s taste for Western films, including Australian ones, seems unquenchable. To that end Abominable done a swell job incorporating Chinese culture and locales inmto a film that also sports the features of traditional American mainstream animation.

It’s hard to imagine the film not feeding the Chinese infatuation with Western film, which is set to help make China the world’s biggest film market before long.

The salty charm of watching underage teens spouting profanities is spiced by adolescent naivety about the adult world in this consistently funny, coarse comedy about three friends whose suburban adventures bring them to a crossroads.

In need to learn how to kiss, forever-pals Thor (Brady Noon), Max (Jacob Tremblay), Lucas (Keith L Williams) inexplicably bypass the internet and use a drone to secretly observe teen girls Hannah (Molly Gordon) and Lilly (Midori Francis), one of whom they expect to get it on with her boyfriend.

After a quick and amusing pile-on of mishaps the girls end up in possession of the drone and the boys find themselves holding the girls’ baggie of drugs. A plot of sorts develops as they try arranging an exchange while dealing with sidebar issues involving first love, getting to a popular school mate’s party and realising a stereotype-breaking dream, Billy Elliot-style.

The boys all brandish a fluent, and amusing command of blue language but they draw their biggest laughs when confronting aspects of the adult world they either don’t understand, or do understand yet find repulsive.

It’s a fine line director Gene Stupnitsky has to maintain, and he does a fine job keeping the humour earthy while keeping it from becoming gross or tasteless.

A veteran writer for The Office, which also treads the same line, he co-wrote this with Lee Eisenberg, who produced the film with Seth Rogen, the defining man-child of modern American comedy and whose fingerprints you can feel all over the shenanigans here.

Indeed, Good Boys is essentially a look at what a man-child is like when he is still a child, figuring out the path to adulthood and valuing those early-teen friendships that will keep him from having to surrender too much of that transgressive pre-pubescent energy as he grows up.

Ever since he walked onto our screens in First Blood in 1982 all that Vietnam War veteran John Rambo (Sylvester Stallone) has ever wanted was peace. Just peace. And a little space.

As bad luck – he would say destiny – would have it, however, Rambo spent much of that film and its three sequels (1985, 1988, 2008) at war, both with his enemies and with himself. The rage he manages to contain, however barely, honours the plight of abandoned prisoners of war and neglected veterans.

Paraphrasing his philosophy, all he wants is for his country to love its warriors as much as they love it. Anything short of that, well, just the peace and the space will do. John Rambo doesn’t ask for much. Just don’t get him angry.

In Rambo: Last Blood our war-hating anti-hero seems to have found a measure of peace with a makeshift family – including his long-time Mexican friend Maria (Adriana Barraza) and Mexican niece Gabrielle (Yvette Monreal) – and space on a huge ranch once owned by his father.

Around the house Rambo has built himself a complex warren of tunnels in which he amuses himself by listening to music and making weapons.

Helping out as a volunteer with the local rescue authorities, Rambo proves himself a major asset, yet he still grieves for the lives he fails to save. Guilt now seems to define his winter years.

His niece brings him a measure of happiness and pride, with the prospect of college offering her a better life than he can provide. He loves her, protects her, even makes friends with her friends.

But she’s an independent, foolhardy soul, so when she defies his advice and goes in search of her worthless father across the border into Mexico she promptly gets caught up in a prostitution slave ring.

He now has the last thing he wants, but the one thing his warrior instincts crave: a mission. So off he goes to rescue her, his unique talents ready to tally up a huge body count.

And we know what’s coming.

As violent as the last Rambo was, where bodies were torn to pieces by Rambo’s machine gun fire, Last Blood easily qualifies as the most violent.

When Rambo kills, there are no cutaways and no room for argument. He doesn’t just hit someone in the head, he takes their head off. Whenever he pierces an enemy’s anatomy with bullet or arrow, blood doesn’t just leak, it shoots out in digitally enhanced geysers of dark scarlet.

In close-quarters combat he tears flesh and breaks bones. It’s only a guess, but a good part of the sound effects budget for this film was probably spent on heads of lettuce, scores of which must have been torn apart in front of highly sensitive microphones to accentuate the carnage Rambo unleashes.

It’s all done in the name of catharctic revenge, of course, as the characters fans expect. Rambo won’t act unless motivated, and what happens to his niece is designed to provide motivation enough.

Politically, the film doesn’t have much to say aside from featuring some shots of the border wall between the US and Mexico. The Mexican bad guys are super-evil, but the film also features Maria, who stands in as the matriarch, a figure that has never before featured in a Rambo film.