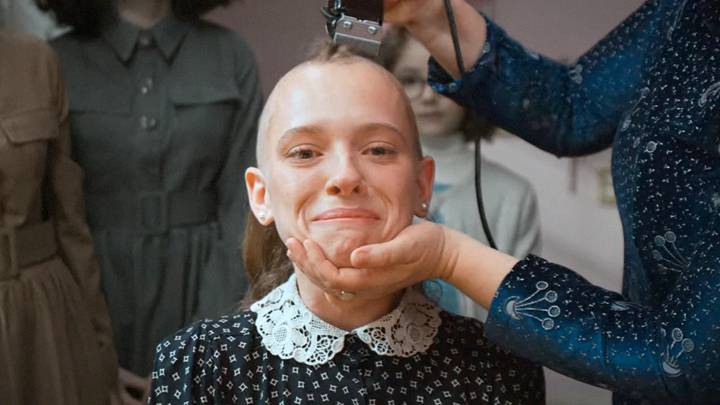 The chief piece of advice you need to heed when embarking on the remarkable journey that unfolds in Unorthodox is to stick with it.

The increasingly engrossing tale of a young woman’s escape from the confines of life in the New York’s Hasidic community is slow – perhaps too slow – to start, but tensions grow as the stakes rise and the quest for personal liberation evolves into a matter of life and death.

Try as she might to fulfill her obligations to the stricter-than-strict customs of her people, Esty (Shira Haas) is unhappy in the arranged marriage she has with Yanky (Amit Rahav), a mother-whipped man with a spine of jelly.

Seen as “defective” and with no support from her peers or from the all-powerful elders, Esty flees New York for Berlin where her former-Hasidic mother Miriam (Delia Mayer) lives. She makes friends with a circle of cool young people who embrace her. Despite hardships that see her sleeping rough in a strange city, Esty finds warmth in their friendship and hope in her application for a music scholarship.

In hot pursuit come Yanky and his street-wise cousin Moishe (Jeff Wilbusch) who are tasked with bringing her home to do her duty.

While Moishe is willing to use whatever means necessary, including guilt and the accusation of betrayal, Yanky’s exposure to the outside world his wife has escaped to plants doubts in his mind about whether the presumed moral righteousness of their mission can stand the light of day.

Told in dual narrative mode, Esty’s escape to Berlin is peppered with flashbacks revealing her arranged marriage and gradual alienation from the community, which is brutal to say the least.

Given what Esty goes through, Unorthodox is no advertisement for the hardline Hasidic lifestyle of servitude and submission. With her value as a human being measured only by her ability to get pregnant, Esty’s motivation to escape is strong, even though she still holds on to some of their beliefs.

Strong as the premise is, Unorthodox takes a while to find its feet, the two concluding episodes being where the gravity of the story belatedly kicks in.

As the savage efforts by Moishe and Yanky to locate her heats up – the threats issued to a hapless tenant is especially cruel – Esty is striving to hit square one of her new life.

But will she make it? It’s quite an emotional nail-biter thanks to some exceptional direction from Maria Schrader who delivers a memorable finale that has the feel of a gripping detective thriller as it homes in on its pay-off.

Performances throughout are finely etched and nuanced, with Delia Mayer as Esty’s mother Miriam a real stand out. Having fled the community herself leaving Esty behind, the desperation she shows in trying to cut though their shared trauma and reconnect with her resentful daughter are among the most moving scenes in the series.

Still, it is upon the slender shoulders of Israeli actress Shira Haas that Unorthodox rests and her performance is truly superlative.

With her diminutive frame used to highlight her vulnerability, Esty’s growing sense of freedom is marked by a poignant series of small, personal moments.

The most liberating is when she visits a lake and is invited by her new pals to take a swim. She gingerly enters the water fully clothed and submerges herself as though being baptized into a new life. It’s a solemn moment, beautifully captured. Everyone around her is enjoying a casual frolic in the water. She is being transformed.

There are other scenes where ordinarily trivial moments are rich in meaning: getting new clothes; dancing; trying on lipstick; connecting with a new male friend. Schrader does a terrific job imbuing these instances with such import.

As a director she also doesn’t hold back on the tortures Esty has endured in her married life. This includes staging what must be one of the most unerotic sex scenes in screen history. Rarely has a director’s intent to make us feel a character’s pain been so vividly realized.

Unorthodox was adapted by Anna Winger, producer Alexa Karolinski and Daniel Hendler from the 2012 memoir by Deborah Feldman called Unorthodox: The Scandalous Rejection of My Hasidic Roots.

Remarkably, the sequences of Esty’s life in Berlin – the real juice of the story – weren’t in the book but were created through the adaptation process. To their credit they have done a fine job incorporating the ghosts of the Holocaust in Esty’s story, the possibility of changes to old-world thinking and the use of art to help deliver an emotionally gratifying resolution.

Given the factual basis of the Hasidic life depicted here, what Unorthodox has to say about the state of 21st century feminism is a matter of debate.

In the quest to claim the right to her own life, Esty faces the fire more or less on her own. And though patriarchy is meant to be a major target for modern-day feminism, it is alarming one could thrive without hindrance, and in such a progressive metropolis like New York, as the one portrayed here.

Buckle up! It’s full-throttle, balls-to-the-wall, A-grade action from go-to-whoa as a sour Australian mercenary (Chris Hemsworth) attempts to retrieve the son of an Indian drug lord who has been kidnapped by another drug lord.

The story is necessarily basic to allow the maximum amount of boom-crash action to be shoe-horned into the proceedings – and man does it deliver, though with perhaps a little too much bloodshed and with the body count tallied up Hemsworth’s manic machine gunning and close-quarter double taps enough to rival a civil war.

The jewel in the crown of all the masterfully orchestrated mayhem as Hemsworth and his quarry charge through the streets is a truly jaw-dropping, breath-taking, brilliantly conceived set piece that combines fire fights, fist fights, car chases, foot chases and even falls from buildings into a continous sequence that goes for about 12 minutes.

Know as a “oner”, the set-piece comprises of several separately filmed action scenes that are seamlessly blended together to create the illusion that the camera captured the whole thing in one take. Truly marvellous stuff, and another testament to the artistry possible with digital filmmaking. Other recent examples of great action “oners” were in the John Wick films and the underrated Charlize Theron film Atomic Blonde.

Hemsworth, for his part, is a nice, tight fit for the role of action hero – or should that be anti-hero? – Tyler Rake, handling his weaponry with flair and his fights with gruff balletic grace.

He also takes enough punishment through hits and gunfire to avoid the tag of being a bullet proof cliche. OK, he seems to have remarkable aim that drops adversaries at a frightening rate, but he is a hero that bleeds.

He also feels. As he takes his young charge (played by Rudhraksh Jaiswal) through, and often under, the streets towards sanctuary he begins bonding with him. We also get flashbacks pointing to Rake’s painful personal history. So it’s not just about fight choreography: Hemsworth actually puts in a performance.

Easily one of the best straight-up, no-nonsense B-grade action films we’ve seen in years, the shebang is the first to be directed by veteran stuntman Sam Hargrave. The film was written by Joseph Russo who, with his brother Anthony (aka The Russo Brothers) also produced the film with Hemsworth.

The Russo Bros also directed the Marvel Universe films Captain America: Winter Soldier/Civil War and Avengers: Infinity War/Endgame. Hargrave worked on all of them and Hemsworth is, of course, Thor.

Now, that kind of pedigree doesn’t automatically mean you get a good movie, but it’s pretty clear in this case that they were all on the same page in delivering a first-class knockout action movie. It certainly furthers the case for there to be an Oscar for best stuntwork or best action film to honour the huge effort and artistry that goes into making these crowd-pleasers.

And here’s an amusing footnote: Extraction has been the subject of some low-level grumblings accusing it of being a “white saviour” film, in that the creators and the hero are white though the film’s location is not.

The story behind the demise of legendary gangsters Bonnie and Clyde at the well-armed hands of two ageing Texas Rangers gets a solid, unhurried treatment here from director John Lee Hancock (The Blind Side; Saving Mr. Banks; The Founder).

Leaning into their roles as old men who are well past their prime, Kevin Costner and Woody Harrelson play Frank Hamer and Maney Gault respectively and respectfully.

Hired off-the-books by a state government official (John Carroll Lynch from Fargo), their job is to outrun the official manhunt for the notorious celebrity criminals and shut them down.

It’s a tough slog. Unfit and with their joints giving out Hamer and Gault are essentially cowboys in a car. Yet, for all their frailties, they do have the swagger of seasoned lawmen who follow the clues as well as their instincts.

Also, they have enough high-powered automatic weapons to start a small war, which is their intention once they get close enough to the famous couple.

With a love of long shots showing dispossessed people flowing through the dusty Depression-era landscape, Hancock, working from a thoroughly researched screenplay by John Fusco, directs the drama with a hard nose and with no love for Bonnie and Clyde.

In some of the film’s punchiest scenes he contrasts their glamour and huge popularity as “Robin Hood” hoodlums – they never stole from or hurt the poor, apparently – with less palatable truths, such as the fact that Bonnie Parker loved killing cops.

The exacting recreation of their killing is stripped of the melodramatic tone made famous in the 1967 Warren Beatty/Faye Dunaway film Bonnie & Clyde.

That film played upon the romantic myth of Bonnie and Clyde. The clear intent here is to show up their cold criminality, with Hamer and Gault representing the long arm of justice slowly catching up with them.

It’s an arresting, coldly captured ending designed to counter the persistent sentiment that somehow Bonnie and Clyde received a fate they did not deserve. The film’s closing captions revealing how Bonnie’s funeral drew 20,000 admirers and Clyde’s enjoyed 15,000 starkly illustrate the disconnect between the public love they enjoyed and their crimes as depicted in the film.