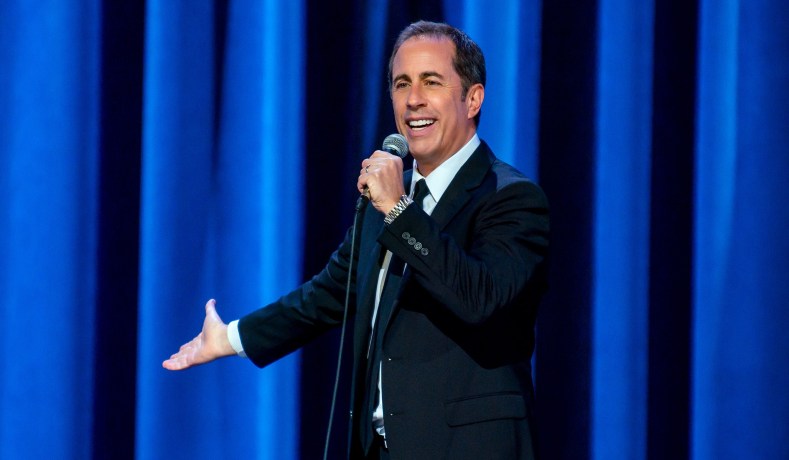 If there is a central purpose to the comedy of Jerry Seinfeld post-Seinfeld it’s that possessing untold wealth and riches offers no protection from the omnipresent irritations of life.

Much like the sitcom’s co-creator Larry David – whose anti-PC series Curb Your Enthusiasm shows the same comedic obsession with the small stuff – Seinfeld still presents as an ordinary shmoe at one with the common man, save for his amiable ability to weave shared experiences and everyday observations into forehead-smacking comedy gold.

Still bearing that signature high-pitched voice of exasperation, Seinfeld strikes a high laugh-per-minute quotient from the get-go as he strides onto the stage at the Beacon Theatre in New York City.

Sticking to his guns as a whistle-clean comedian – he will describe a profanity, but not utter one – Seinfeld tears through a ripper, tone-setting opening rant about the very act of coming out to see his show. It kills.

With a deep love of wordplay that often sounds like comic poetry, he then lets loose over his bewilderment at digital life, of people feeling they’re nobody without their phones. His gift for physical comedy comes forth as he illustrates the anxiety of people whose phone battery is running out.

But Seinfeld reserves his most acidic sprays for texting culture, his comic alchemy hitting several highs as he exposes the vacuity of so much present-day communication. It’s one topic that gets him really angry.

Not that he is, really. At 65, with a 19-year marriage and three kids on the clock, Seinfeld feels it’s his favourite decade, chiefly because of the license seniors have to not feign interest in anything.

Though his observations about the demands of married life and of female behaviour sound a tad formulaic, Seinfeld proves here what he’s always believed about the stand-up being the purest form of comedy, of maintaining an essential equality with his fans, obvious differences notwithstanding.

To wit, in one remarkable bit Seinfeld negates his fame, wealth and celebrity in one fell swoop by celebrating the universal joy of eating a sub-standard hot dog. It sucks, he declares, but it’s great.

Hamfisted and melodramatic, naughty, often nasty and definitely over-sexed, Hollywood is an enjoyable, B-grade, adults-only lark with a mission. High gloss and low-brow to a fault, it slowly sinks  its hooks into you, despite its bombastic messaging about diversity, its love of cliches and its sporadic lapses in plausibility.

It’s post-war Hollywood and the boom town is a magnet for the young and the stupid of America, all of whom want to be part of the glamour of the movies.

One such dolt is  Jack Castello (David Corenswet), a naive, handsome, gym-built young lad fresh from the war and with a pregnant wife to support.

Just one of thousands with the same dream, his initial disappointment is quickly redressed when he meets a fairy godfather-type figure in the form of Ernie West (Dylan McDermott), an enterprising chap who runs a swish service station that specializes in providing male prostitutes to Hollywood’s elite.

Jack is as straight as an arrow and loves his wife, yet quickly discovers the importance of compromise and that sex is the surest way through the gates of Ace Studios.

Much of this is seedy stuff, to be sure. Portraying old-school Hollywood as a boiling cauldron of favouritism, racism, privilege, blackmail, abuse, corruption and, apparently, more homosexual sex than Caligula indulged on a long weekend, the arc of the series follows the controversial production of a film called Peg, about a failed starlet who killed herself by jumping off the Hollywood sign.

Clunky as Hollywood often is – especially in the first episode as Jack enters the fray – the lurid tabloid nature of all the dirty dealings and slippery studio politics admittedly has a certain prurient appeal, though those with an aversion to gay themes will find the proceedings tough going.

Still, there is a noble enterprise coursing beneath all the shenanigans, being a very obvious and loudly stated message about diversity in Hollywood.

No room for subtlety here, folks. The series is peppered with scenes where some very progressive, 21st century, pro-diversity, post-#metoo dialogue comes out the mouths of characters who are supposed to be living in the 1940s.

You could get hung up on these obvious flaws trip. But better to forgive the faults and enjoy the ride.

And the performances are straight from the in-your-face school of acting, offering up some peachy turns: Samara Weaving is great as a  beautiful blonde up-and-comer; Rob Reiner chips in as a gruff studio head; but the stand out is The Big Bang Theory’s Jim Parsons as the slimy Henry Willson, a duplicitous agent who takes the young Rock Hudson under his wing, and his sheets.

It’s not classy, to be sure. But it sure is entertaining.