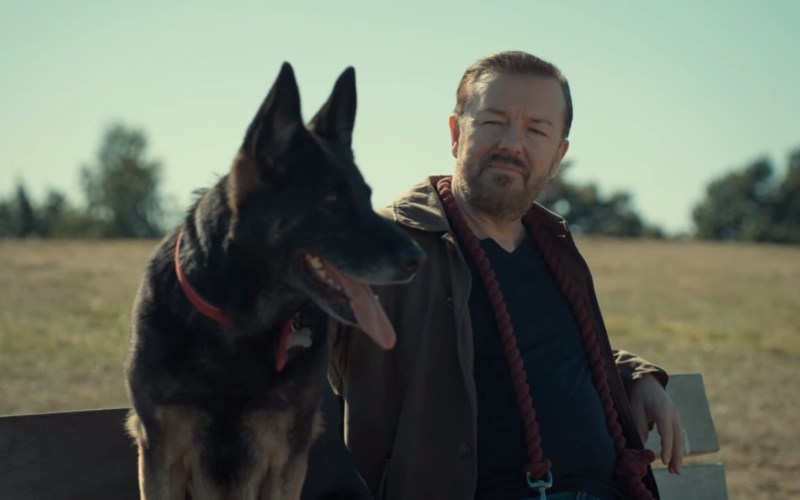 The excellent second season of After Life sees writer/director/producer Ricky Gervais delving ever deeper into the jagged issues associated with the fathomless grief of dealing with the untimely loss of a loved one.

Having unconditionally surrendered to sorrow in season one, season two sees small-town journalist Tony Johnson (Gervais) attempt to become a better person by rejoining the human race, which he had previously declared war on as a means of coping with his trauma.

It’s bumpy going to say the least. Extended flashbacks to his joyous life with wife Lisa (Kerry Godliman) compound his difficulty in getting through the “acceptance” stage of the grieving process. Still, Tony valiantly persists in trying to be just a bit less self-obsessed, a challenge that comes to a head when his newspaper is faced with closure.

It’s certainly not all gloom. There are generous smatterings of funny business throughout – the psychiatrist turns out to be a bit of a lad; an amateur stage show goes awry – but there’s arguably less comedy here than in season one. And that’s a good thing.

Much like American comedian Louis CK’s work in his hit series Louie, Gervais has long been eager to use comedy as a footbridge into more dramatic and emotionally resonant terrain. Here, his main focus is Tony’s quest to reclaim his inner life, something he lost after his loss.

Tony is still deeply damaged. He shows signs of self-repair and growing compassion for others, however, his grasp on hope for a chance at happiness remains tenuous.

Mental health is again a key theme in season two, with Tony possibly engaged in a form of self-sabotage. It’s as though he considers being happy a form of betrayal to his beloved.

Gervais has delivered another thoughtful, engrossing season of After Life, a show that might have the form of a sitcom, but not the content.

The intriguing premise of this outstanding, understated, thought-provoking science-fiction series involves the Twilight Zone-like effects an underground experimental laboratory has on the people living near it. The laws of physics become pliable, time bends, people can exchange personalities and travel to other dimensions.

Set in a high-tech alt-future, this is not the science-fiction of gadgetry, starships and visual effects but of ideas and concepts that all have a strong moral basis.

The mood throughout is contemplative, the stories are all character-driven and photographed in evocative natural light, giving each episode a painterly cinematic feel.

The totems of futuristic technology are placed with minimalist grace; giant semi-circular structures sit upon old shacks; giant towers gleam in the distance; a lonely robot walks about in the woods as if lost, ignored by the humans who pass by. It’s a powerful example of the less-is-more school of art direction.

Full of surprises and strong performances from an impressive cast of young unknowns – Jonathan Pryce, Rebecca Hall, Jane Alexander and Paul Schneider are the few big names in the show – Tales from the Loop maintains a finely honed aura of mystery and danger that becomes more and more compelling as each bizarre story ticks over.

Tales from the Loop was created and written by producer Nathaniel Halpern (Legion), based on the illustrated work of Swedish artist Simon Stalenhag, who has praised Halpern for bringing his book to such vivid life.

It’s easily one of the most remarkable and inventive science-fiction series we’ve seen in years (including Stranger Things), its cool style sitting in perfect counterpoint to the swirl of ideas coursing through each unpredictable adventure.

Few Australian comedians expose themselves on stage with the delirious abandon of Judith Lucy. Firmly established as the queen of self-deprecation, an artform many have attempted but few have nailed as totally, Lucy celebrates her entry into her 50s by launching into an often hilarious recitation of her relationships with men.

Exasperated by the travails of middle-age, Lucy stands at a crossroads, totally confused, assessing her love life. The confidence of her delivery stands in sweet contrast to the insecurity that seems to dominate her social life, her big question being: should she continue dating?

Flummoxed by male behaviour and the expectations put upon women, she has no idea, so enlists select members of the audience to help her out. It’s a rare example of audience participation done well – nobody leaves their seats, is embarrassed or insulted. And it’s all underpinned by a genuine warmth that manages to seep through Lucy’s signature sarcasm.

It’s a well-rounded, gag-heavy set spiced with some golden observations about ageing, sex and drinking. There’s also a very funny bit about who does, and who doesn’t, come to her sell-out shows.

Does her memorable finale go too far, giving us – or rather, showing us – more information than we need? Probably. Still, it’s something most would only share with close friends, which is how Lucy chooses to regard her people.