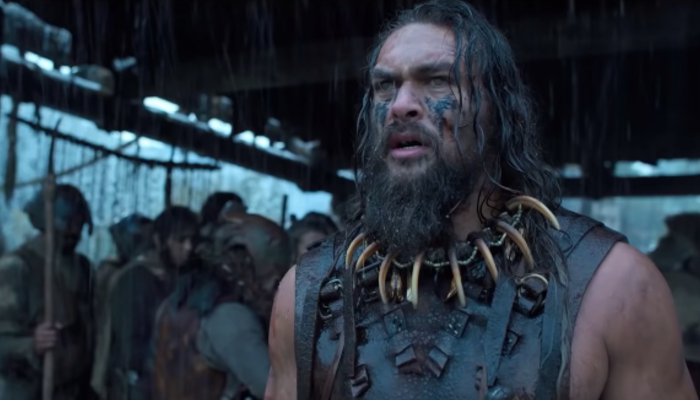 MORE STREAMING TIPS FOR THE HOUSEBOUND

See *** (eight episodes) The post-apocalyptic future world we are taken to in See is nothing if not novel: in the 21st century a virus reduces the earth’s human population to a mere two million (no prophecy here, we pray), all of whom are blind.

Two centuries hence we meet a tribe living rough deep in the woods, apparently oblivious to the urban centres once inhgabited by people.

Lead by Baba Voss (Jason Momoa from Aquaman), they fight for survival against an army of witch hunters who are in pursuit of a woman who has just given birth to twins in the tribe’s village settlement.

Sporting impressive scale and production values,   there’s novelty aplenty in seeing two armies fight without the benefit of sight and hearing of how the concept of vision has so receded in memory that to speak of it is considered blasphemy.

As a piece of throwaway fantasy escapism, See offers a diverting off-road adventure, though, peculiarly, it is aimed at adults. One imagines it would have been suitable for the family were it not for the unnecessary inclusion of graphic violence and swearing.

It’s possible the makers felt compelled to feature graphic fight scenes so See would be taken seriously as mature entertainment. That’s plausible. Less easily explained is why, given the total collapse of society and cultural memory, the f-bomb would survive in tact.

And given how they have no guns nor contact with artefacts of the former civilsation, how have they smelted metal to make such brutally effective fighting blades? Posing such questions might be deemed as pedantry but, hey, it’s fun.

As for what became of the structures built by humans 200 years earlier before global calamity hit, the opener’s final 15 minutes drops some enticing clues, pointing See in a more interesting direction than its first 45 minutes would otherwise have suggested. (Apple TV+)

Project Blue Book **1/2 (20 episodes) It remains one of the truly fascinating anomalies of modern life that while not a shred of incontestable evidence exists of beings from other planets having ever visited Earth, the popular belief that they have has proven, indeed, to be one resilient, deeply embedded myth.

Joining the long line of films and shows that have tapped into that communal fantasy comes Project Blue Book, a very well-produced period series (now in its second season) that draws its title and stories from the files of the official government investigation into UFOs that took place in the 1950s and ’60s.

That crusade, in turn, was kicked off by myriad sightings of UFOs that occurred after the alleged crash of an alien craft – aka a “flying saucer” – in 1947 at Roswell, New Mexico. (Roswell is the focus of the first two episodes of Season 2)

Produced by Robert Zemeckis (Back to the Future; Castaway; Roger Rabbit; etc) the show is essentially a straight-faced, high-gloss lark as two investigators, Captain Michael Quinn (Michael Malarkey) and civilian professor Dr Hynek (a solid turn by Aidan Gillen from Peaky Blinders & Game of Thrones), look into various strange happenings with the aim of discovering a rational explanation and so quell the public hysteria about aliens.

Cold War politics, fear of nuclear war and even the myth of the “men in black” are all scooped up in a very watchable show that is impossible to take seriously, however impressive be the visual effects.

And while it’s easy to compare the show to the The X-Files, Project Blue Book’s true parent is Project UFO, the hilariously dreadful, ultra-cheesy series from the 1970s that also claimed to draw its stories from official files.

So the series is more like a shiny, somewhat more sophisticated reboot of that show rather than an X-Files off shoot. (Amazon Prime)

As The Twilight Zone and The Outer Limits demonstrated in both their original and reboot forms, we all love yarns that push the boundaries of reality. If only Steven Spielberg’s rebooting of his 1980s series of “out there” adventures had a grabbier opener.

The Cellar is a tepid tale of time travel in which a Tinder-loving carpenter (Dylan O’Brien) is flung back 100 years while renovating a house with his brother.

Inevitably, he meets a pretty girl (Victoria Pedretti) and, in trying to figure out a way back, falls for her and so decides to save her from an arranged marriage by taking her with him. If only he can work out how he got there in the first place, then reverse the process.

The “twists” we usually see in stories about time travel – by far the most over-used device in the sci-fi/fantasy genre – are visible a mile away, though the show does manage to momentarily rise above the cliches to pull off a pretty strong, satisfying ending. (Apple TV+)