This is destination dining. For starters, Point Leo is on the quiet side of the Mornington Peninsula, a bit of a hidden gem, and if you don’t know it’s there, you probably won’t find it. So chances are you won’t just stumble upon the impressive new Point Leo Estate, you’d have to know to look for it. And you should look for it. 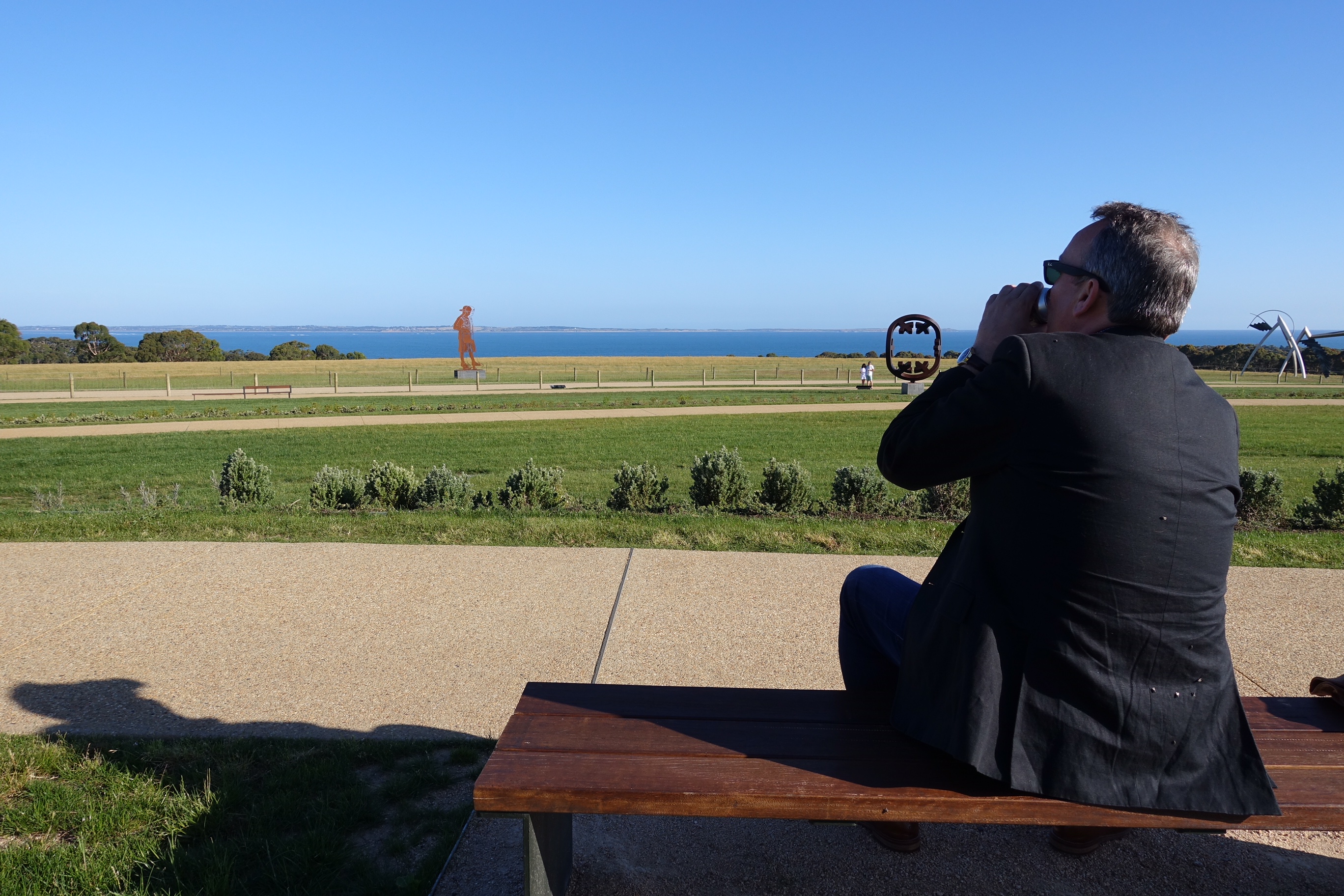 It breaks one of the golden rules. The one that proclaims that if it has a sea view, it won’t have great food. Of course there are exceptions, but sadly not many. This is one of them.

Of course it’s not just a restaurant, it is other things first. A winery and cellar door. Then, there’s the on-site sculpture park, boasting 50 large scale works from local and international artists. You’ll need to give yourself a good hour at least to have a look around the art, the advantage here is you can do a tasting first and take a glass with you.

To the restaurant, and it’s big. Seating 110 punters, my first thought was that it’d have to be loud. It’s not, despite the large space and hard surfaces there. Nice soundproofing, guys.

It’s a pretty fine-tuned operation. Service is slick, but friendly. The other golden rule of dining with a view is of course that you will be charged a premium for it. This was the biggest surprise at Point Leo Estate. If I compare the mains to some seafront establishments closer to the city, this was seriously reasonable. Quality seafood mains at the mid-$30 mark are substantially cheaper to some stayers in St Kilda or the west. 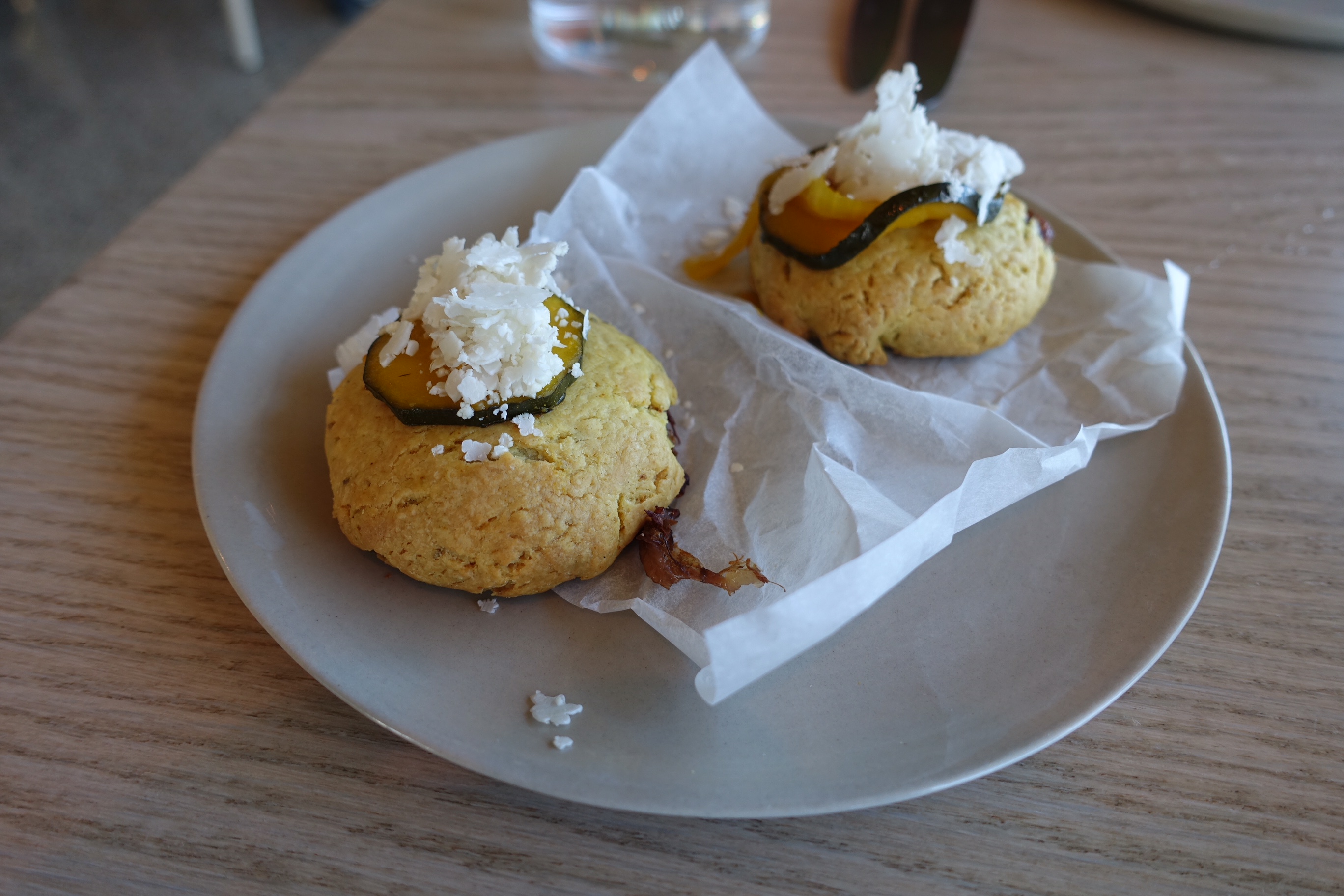 So what did we eat? It was a rustic start, a unique wallaby pie. The filling is slow-braised tail and shank from Flinders Island, mixed with kombu, port wine and shiitake mushroom. The pastry is a rough short crust, and the addition of fennel seed, mild curry powder, and a local zucchini pickle to serve gives it a slight Indian bent. 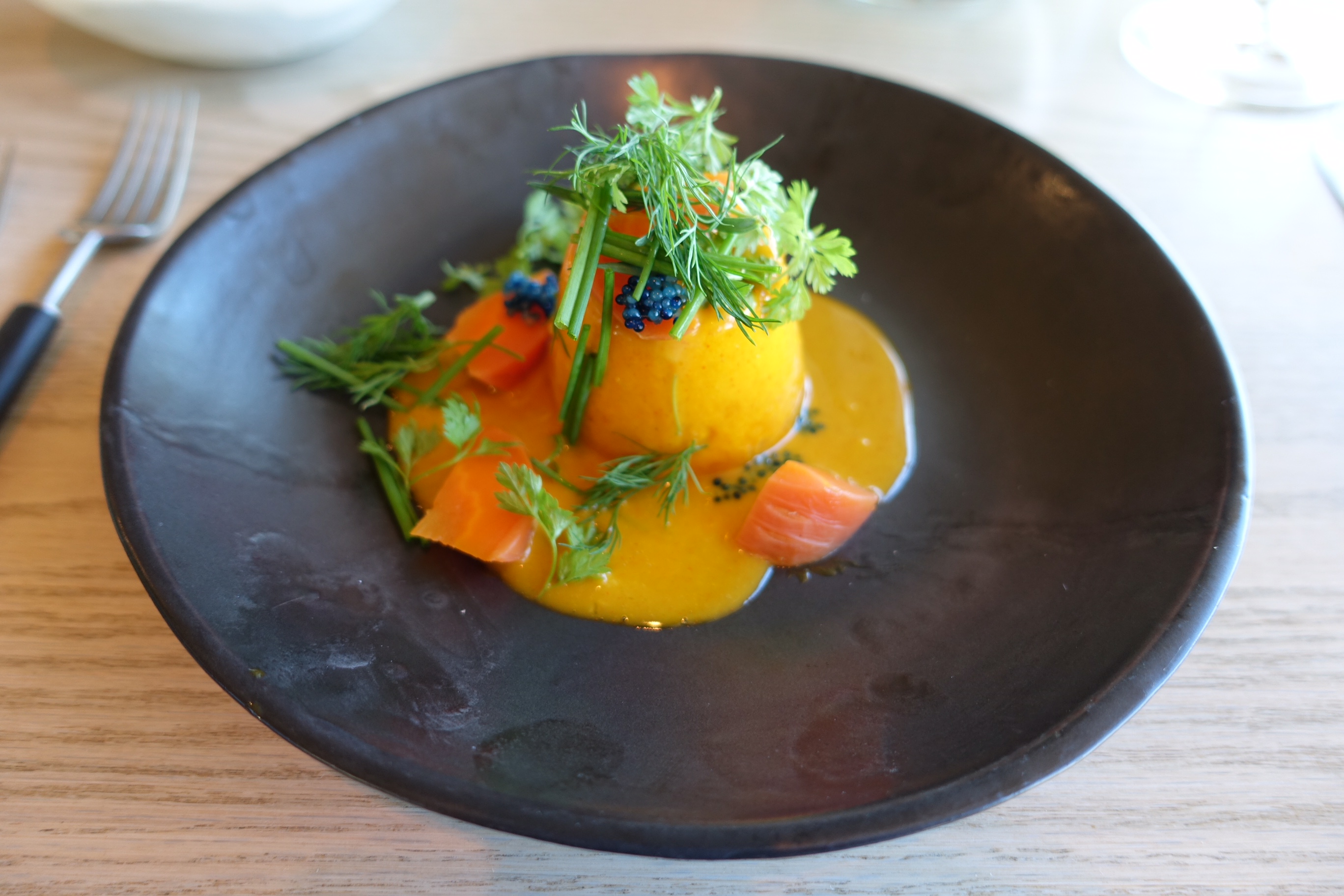 To mains, and it was one of those rare occasions where we both thought we “won”. I definitely chose the best dish of the night; but then apparently so did the other half. Not the worst argument to be in. 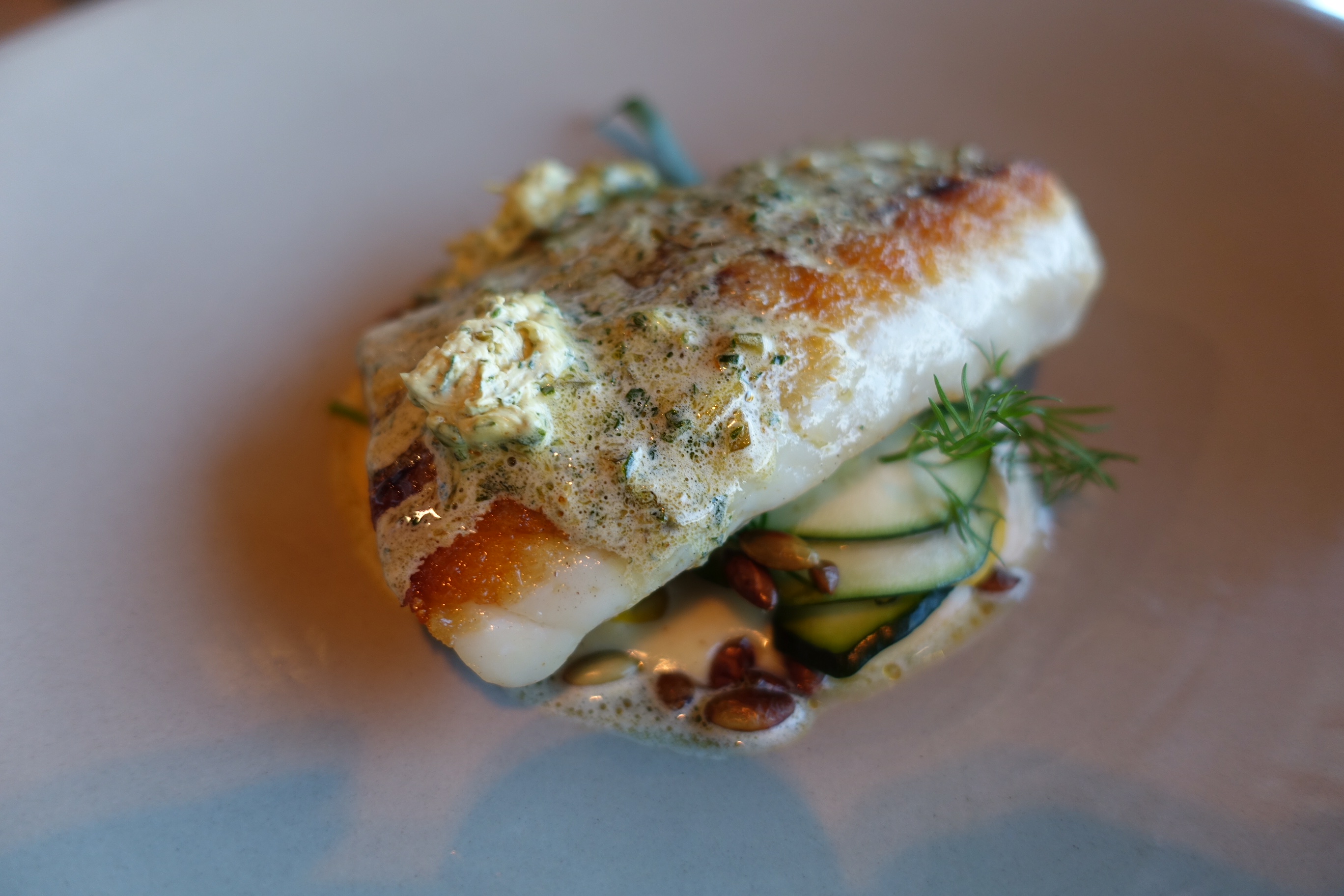 Mine – fresh flathead in the lightest, crispiest tempura batter you ever did taste. I might have copped a slap if I bit into it in a movie cinema. It’s served on a tasty mix of eggplant, smoked fennel and cashew.

Then there is the side dish of the year. I know, I know, it’s January – but it’s certainly clubhouse leader. Grilled lettuce with smoked fish tartare. Huh? Halved lettuce (I think Romaine) gets a treatment on the grill, and is topped with a tartare use made using smoked whiting bones, mixed with capers, cornichons and shiitake mushrooms. It’s just a flavour explosion.

The wine list is largely Victorian, we figured we better go for the home-grown stuff, so thoroughly enjoyed a bottle of Pt Leo Estate Pinot Noir.

Pt Leo Estate is quite the package – you’ve got the views, the sculptures are a great excuse for some exercise, of course there is wine, the food seriously is good, and with surprisingly reasonable prices, this one breaks all the usual seaside dining rules. 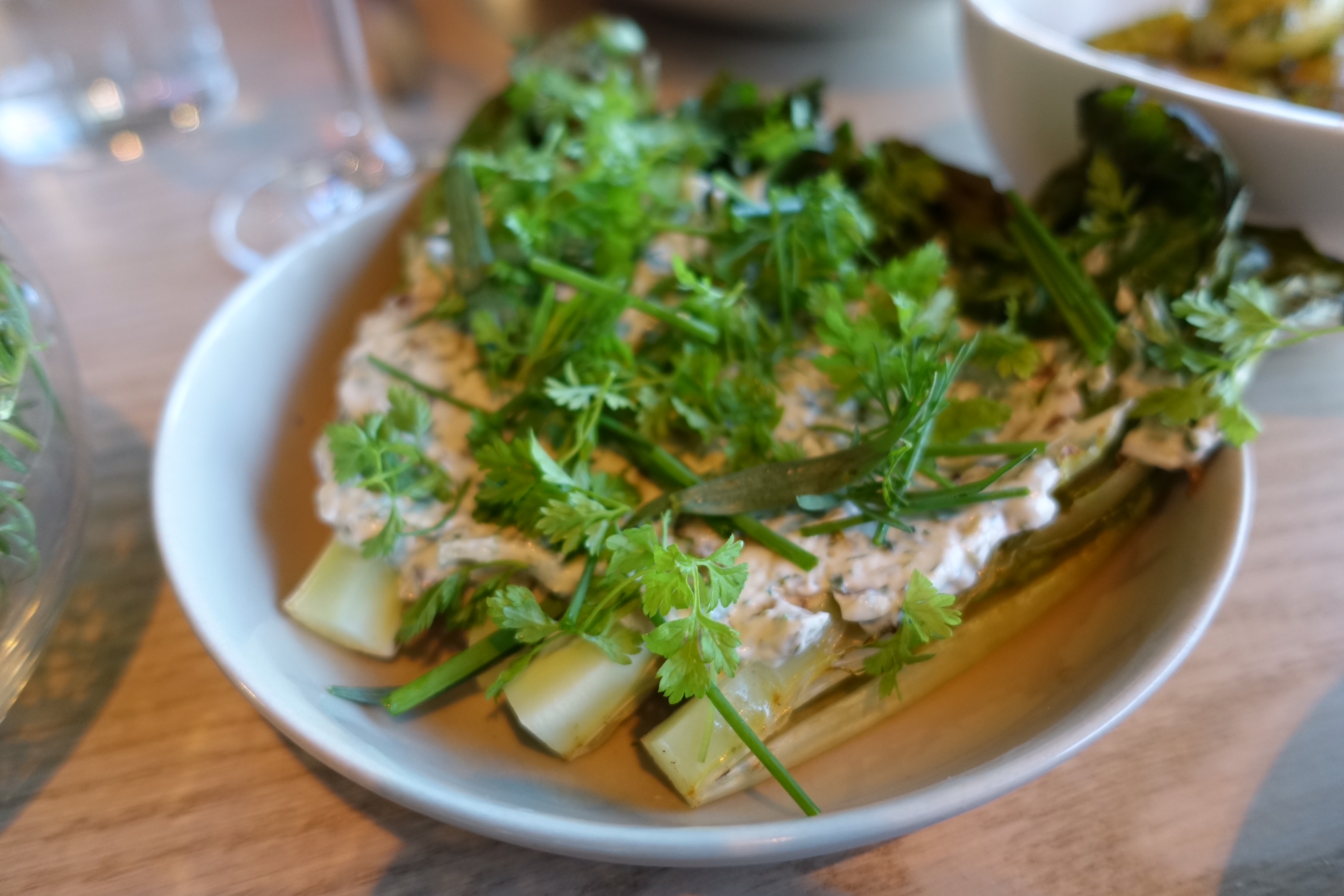