SCROLL DOWN FOR PHOTO GALLERY

Well, it was much-anticipated, and yet I didn’t quite know what to expect from Flinders Island, let alone from its inaugural Food and Crayfish Festival.

I think I pictured flying in to something akin to our own Phillip Island – flat, farmed, reasonably inoffensive. Flinders Island was surprising for all manner of reasons – firstly, because it was far larger than I imagined, with granite mountains, white sandy beaches, and lush countryside.

The Festival itself was brought together by passionate locals like Jo; Tom Youl, property owner and Flinders Island advocate Liz Frankham, and festival director Amanda Vallis; but the foraging, hunting, and cooking was carried out by a group of passionate interlopers.
They were headed up by David Moyle, now at the helm of Melbourne’s LongSong but famous for his work at Hobart’s Franklin. Last year, locals invited Moyle to the island to see the bounty on offer. Needless to say he was converted, and agreed to come back with industry mates in tow and head up the very first festival in April.

As per the plan, Moyle, top NSW chefs Mark LaBrooy and James Viles, Victoria’s Matt Stone & Jo Barrett, and Tasmania sommelier Alice Chugg camped not too far from the ocean, and spent time with locals fishing, diving, hunting and foraging for the food – some of which was served up up on the day. At their fingertips and up for grabs – crayfish, abalone, wallaby, octopus, saltbush lamb, even Cape Barron goose if they could track it down.

The menu was devised over the week, the location for the lunch was still not set in stone, and weather wasn’t looking great. So what was always hoped to be an outdoor spectacular on one of the island’s striking beaches ended up in a working woolshed, transformed in just a day or so by a group of passionate volunteers.

Preparation was done in the local school’s kitchen, but the cooking on the day all took place just outside the shed, in coals, or on rusty gates over smouldering fires.

Inside it was all hands on deck, and there was something uplifting about seeing professional service staff who’d just arrived on a delayed flight, assisted by chefs’ wives and girlfriends, festival staff, and local organisers, working in unison to get tables set, starters plated, and guests watered.

In the under 24 hours I spent on the island, this seemed a perfect illustration of what I took to be the ethos of the place – such a tight knit group, whole-hearted, hard-working, determined to show just how unique and extraordinary their home is.

And it all unfolded from there. Snacks went out to the guests in the rustic “foyer” who were being entertained by local blokes on ukuleles – wallaby on a stick, octopus skewers, octopus hood sandwiches, wallaby liver parfait, salt bush with abalone salt.

The skies opened, the chefs kept at it outside, stoking fires, checking crays, lamb and veg. Inside, it was impossible to tell who was in charge, and yet it all worked like a well-oiled machine. Out came the black lip abalone with steamed egg custard, coastal herbs and wallaby tail sauce. This can’t have been cooked in a field and served in a shed. It was sublime.

Next, fresh made gnocchi with octopus, served at the same time as giant “campfire boat crayfish”. Several crays were placed down on each table, it almost seemed obscene to see such an abundance of that revered seafood.

It was the saltbush lamb that was cooked on the forementioned rusty gate, albeit not directly on the ageing steel but a bed of seaweed, and it was tremendous. Tender, full of flavour and served with chunky potatoes and pumpkin fresh from the coals.

It all finished with the prettiest little apple crumble dish you ever did see and a home-made marshmallow that reminded you of the fires that would surely have just started the burn out metres from where we sat.

The room felt full with a sense of camaraderie, of pure joy and appreciation for the unique bounty that this exceptional place boasts. It was clear to see the bond that had so obviously developed between these talented chefs and their new local friends, and there was a warm buzz from the overfed, but satisfied guests.

If this was just the first Flinders Island Food and Crayfish Festival, I cannot begin to imagine what they can do with the next. 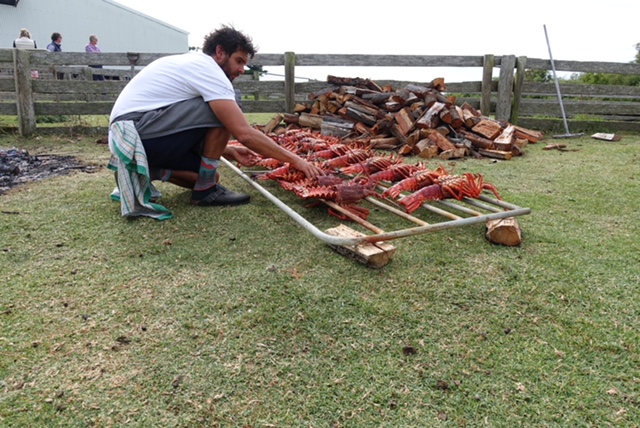 Chef Mark Labrooys with his crays 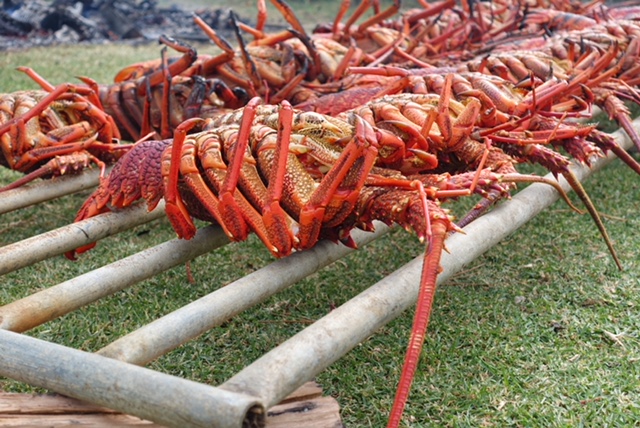 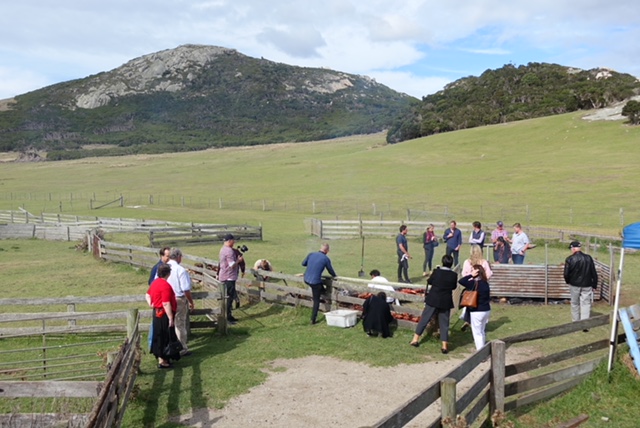 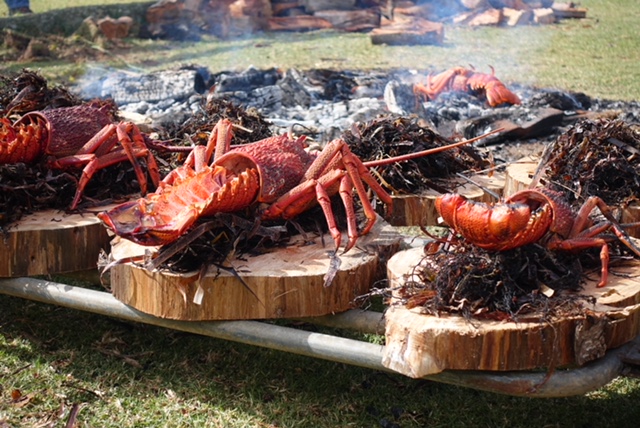 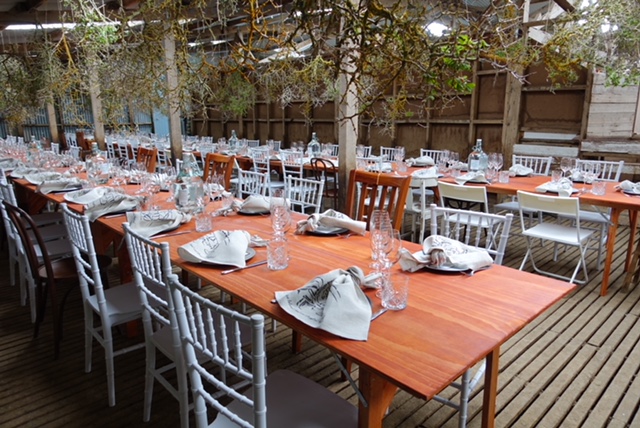 The setup in the shed 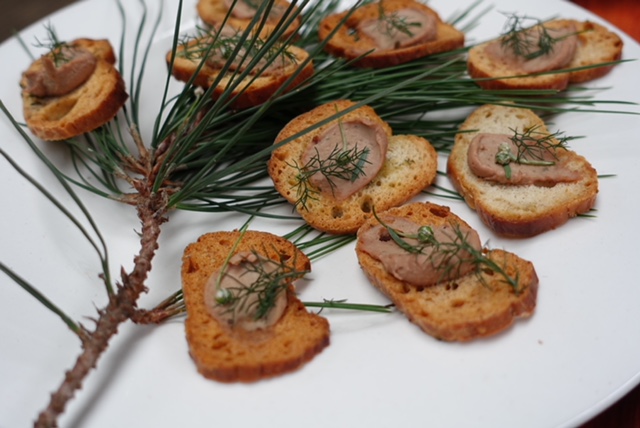 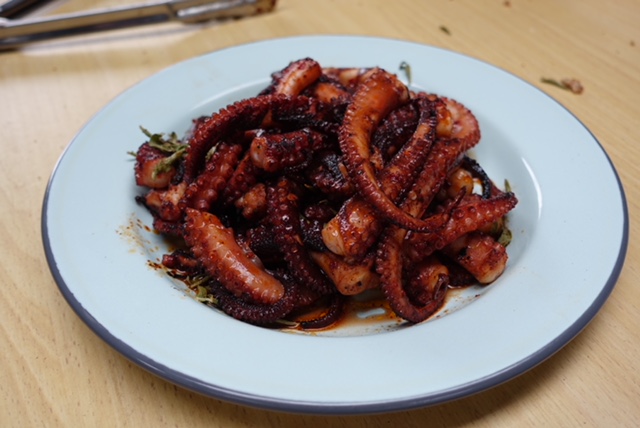 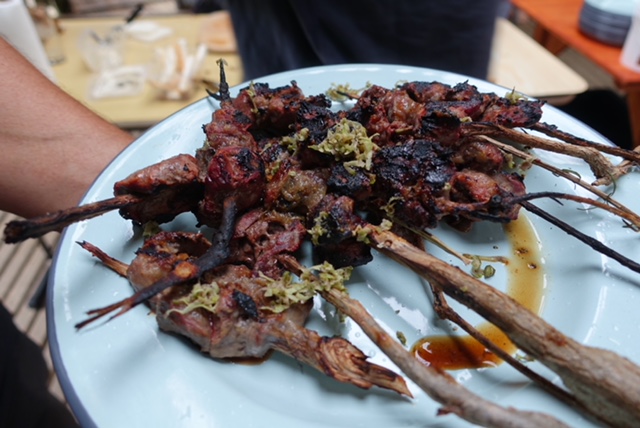 Wallaby on a stick 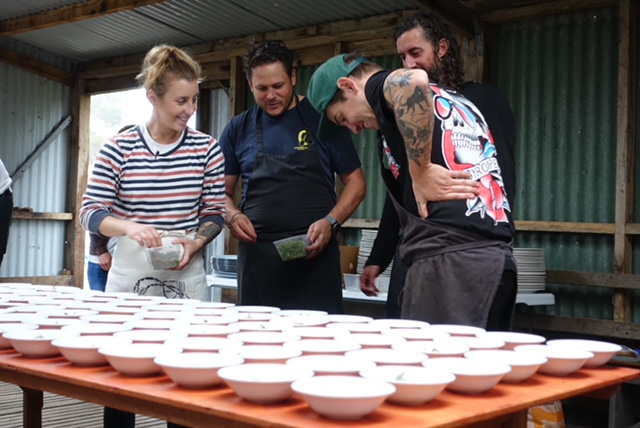 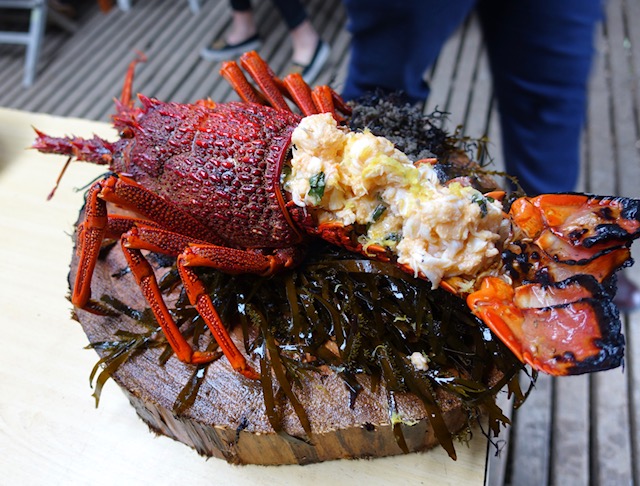 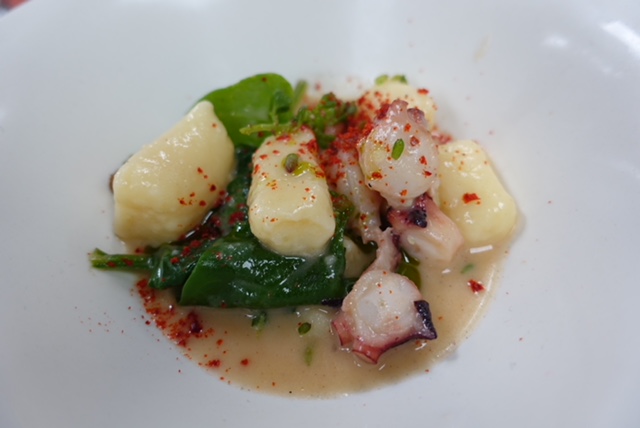 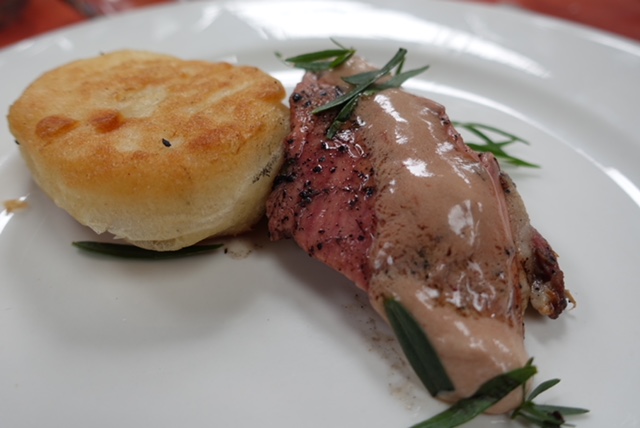 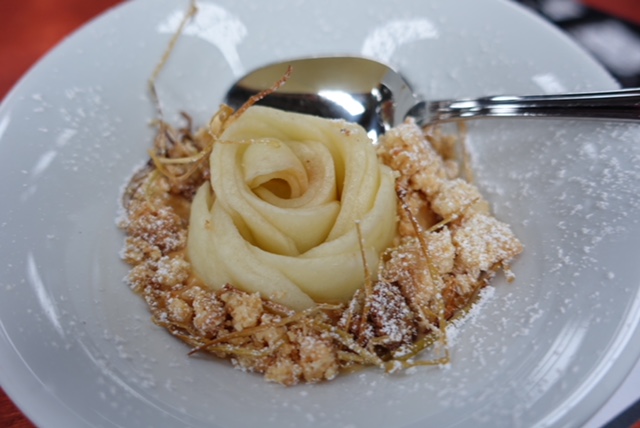