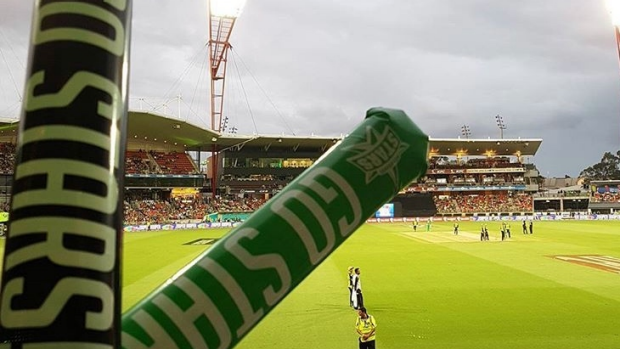 The Sydney Thunder have defeated the Melbourne Stars by 6 wickets in front of 20,076 fans at Spotless Stadium.

Click play to hear from match winner Eoin Morgon and all the 2nd innings highlights from Spotless Stadium.

The Sydney Thunder require 167 runs for victory as they chase their first win of the season. Andre Russell was taken from the field mid-way through the innings after what looks to be a left-hamstring injury and is unlikely to return in tonight’s match. KP shined bright for the Stars smashing 60 off 37 balls which included seven 4’s and two 6’s. The Thunder’s Chris Green was on a hat-trick late in the innings after taking the wickets of Faulkner (12) and Harper (0) but couldn’t snag the third.

Click play to hear from Fawad Ahmed and all the 1st innings highlights from Spotless Stadium.

The Sydney Thunder have won the toss and have elected to bowl.

The KFC Big Bash is back at Spotless Stadium tonight with the Sydney Thunder playing host to the Melbourne Stars.

In a replay of last years BBL|05 final, both teams will be determined to get the win tonight. BBL reigning champions Sydney Thunder come into the game still yet to register a win this tournament. They’ve lost their four opening matches largely due to inconsistency with the bat and some sloppy fielding (7 dropped catches so far in BBL|06). England’s ODI captain Eoin Morgon will play his final game for the Thunder before heading to India for national duties, they’ll also be without last season’s leading wicket taker Clint McKay. Another cause for concern for the Thunder is that their leading run-scorer this season has been their strike fast bowler Pat Cummins, and Andre Russell is still yet to post a double figure score with the bat.  All that will need to be addressed tonight when they face Melbourne.

The Stars have only played two games this season and are sitting at 1-1. Losing to cross-town rivals the Renegades last match they’ll be wanting to get their season back on track. Luke Wright, Kevin Pieterson and Glenn Maxwell will all have to shine with the bat on a ground that typically doesn’t post high scores. There’s a lot of exciting talent on the park tonight and there’s sure to be no shortage of fireworks.

Click play to hear captains Shane Watson and David Hussey with their thoughts ahead of tonight’s clash.