Premier Daniel Andrews says he was “shocked” when he heard Victoria’s former top public servant had spoken to the former chief commissioner during the six mystery minutes central to the hotel quarantine inquiry.

Chris Eccles resigned as Department of Premier and Cabinet Secretary this morning after evidence he spoke to then Chief Commissioner Graham Ashton on March 27.

“I was shocked, when I was informed last night that this call had been made and that a detailed examination of his records had shown that,” Mr Andrews said.

“He (Eccles) had indicated to the inquiry that he had not received a call.”

“It wasn’t a matter of me having to instruct him, he made a decision that his position was not tenable and on that basis I did not need to have a conversation with him to urge him to do something he had already decided to do,” he said. 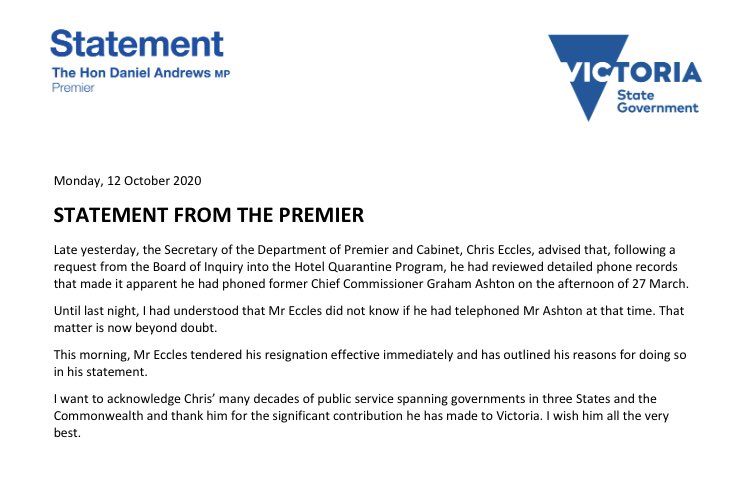 Mr Eccles announced his resignation soon after the tip was received.

It came after the inquiry requested phone records of public servants.

Mr Eccles admitted to speaking with Graham Ashton after initially telling the hotel quarantine inquiry he did not recall that happening.

Despite that, he said he is “absolutely certain” he didn’t tell the former police chief private security was being used.

Press PLAY below to watch the Premier’s press conference.