‘It was so scary’: Neighbours in shock as police shoot naked man after altercation in Mulgrave 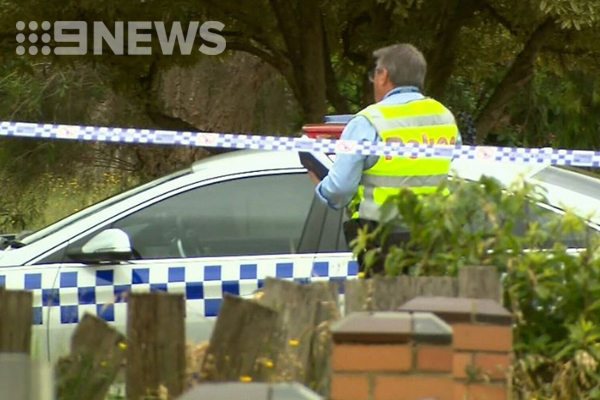 Police have shot a man after he allegedly turned violent against them in Mulgrave this morning.

Seven officers attended the Salford Court property about 7.30am after receiving several reports that the man had assaulted a woman, and that a man was behaving erratically and driving in an unsafe matter.

When they arrived, police found a 24-year-old NSW man naked inside his vehicle and revving the car.

When they attempted to arrest him, it’s claimed he pulled out a knife.

This prompted police to use capsicum spray, but it wasn’t enough.

Police shot the man several times shortly after 8am.

But even that didn’t cause him to stop lunging for police.

“He stood up again and came towards the police again, and he was shot again,” Assistant Commissioner Glenn Weir told 3AW’s Nick McCallum, filling in for Tom Elliott.

“He was still, even while on the ground, hanging on to the knife and threatening police as they were trying to disarm him.”

The man was taken to hospital in a critical condition under police guard, with at least two gunshot wounds.

A neighbour who called police has told 3AW he heard multiple gunshots.

“It was so scary,” Andrew said.

“I could feel myself sweating. I’ve never been involved in anything like it.”

“I heard a male voice screaming at the top of his head, but I couldn’t understand it because it was a different nationality,” he said.

A 50-year-old Mulgrave woman was treated for minor injuries following the assault.

Click PLAY to hear Andrew tell his story in full

Assistant Commissioner Glenn Weir threw his support behind the police involved, who he says are “shaken up” by the incident.

“It’s the sad reality that our members are, on a day to day basis, confronted by individuals who want to do themselves, us, or members of the public harm,” he said.

“I don’t think the members could have done anything else other than what they did.

“Unfortunately his actions have led to the need for firearms to be discharged.”

A 50-year-old woman was treated for minor injuries at the scene.

Several family members, including teenagers, were in the house while the incident occurred on the street outside.

The investigation is ongoing, as per standard protocol following a police shooting, the Armed Crime squad will investigate the incident with oversight from Professional Standards Command.

Anyone who witnessed the incident or anyone with further information is urged to contact Crime Stoppers on 1800 333 or submit a confidential crime report at www.crimestoppers.com.au.