Masked killjoys have paint-bombed have destroyed popular street art in Melbourne’s Hosier Lane at the weekend.

Check this out . These dudes with face masks carrying fire extinguisher filled with paint hit up Hoosier lane tonite. A lot of awesome art work was destroyed. I don’t know mate but that’s just shit . Anyhow that’s how it goes 🙈🙈🙈🙈🙈🙈🙈##Hooligans#🇦🇺#🏴‍☠️#🏴‍☠️#🏴‍☠️#🏴‍☠️

In a move that has outraged much of the street art community, the group of mostly men charged into the CBD laneway and used spray guns to splash paint across the walls.

There to make an impact, the mob of at least 10 appeared to bring along at least two cameramen, including a drone, to document their attack.

As well as destroy artwork that attracts thousands of tourists, the vandals also splashed paint all over the laneway’s iconic cobblestones. 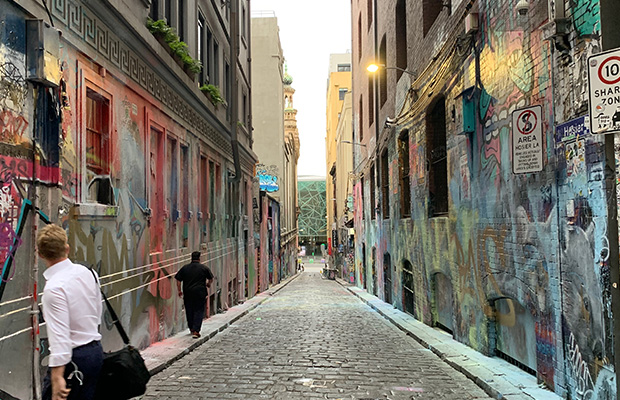 Melbourne council is expected to clean the cobblestones today.

It’s pretty common to find some works tagged but street art fans say this is too extreme and is simply vandalism https://t.co/5KGE3qhX9W pic.twitter.com/WqI51U1yW3

The incident was first reported to Ross and John on the 3AW Rumour File.