Collingwood bigman Mason Cox has ridiculed the AFL’s own media unit in a cheeky tweet over reports of a potential trade to Essendon.

The official AFL Twitter account (@AFL) used unconfirmed reports from other media outlets about the rumoured talks to promote a link to its sponsored Trade Talk blog.

“Mason Cox to the Bombers…? Reports have emerged Essendon has approached the Collingwood forward,” the AFL tweeted yesterday, adding a link to its website with the promise of more content.

Essendon has since dismissed such an approach, which many have taken with a grain of salt given the propensity of AFL clubs to obfuscate at this time of year.

But Cox’s reaction was today emphatic.

20 hours after the initial AFL tweet, the American Magpie responded directly to the tweet with a GIF of Donald Trump saying “You are fake news”. 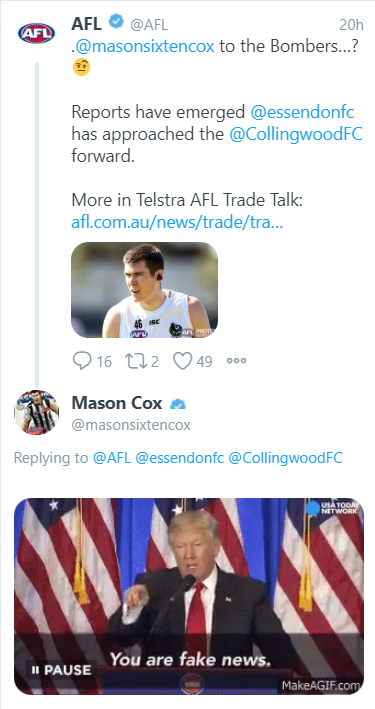 Time will tell, but it seems very unlikely Cox would tweet such an emphatic denial if a move is on the cards.