‘Massive’ fire breaks out in two buildings on Burwood Highway

A huge fire is burning in two buildings the Burwood Highway in Vermont South has been brought under control.

Firefighters arrived at 7am to find two vacant buildings at the former Australian Road Research Board site alight.

More than fifty firefighters attended the scene near the corner of Hartland Road, bringing the fire under control at about 8.30am.

Kerryn told Ross and Russel the blaze is “massive”.

“There’s a massive fire, a structural fire … just opposite the Vermont Shopping Centre,” she said.

Press PLAY below for Kerryn’s call.

The buildings are known to be used by squatters, but assistant chief fire officer at Fire Rescue Victoria, Mark Swiney, says no one was inside.

“Firefighters did a search of the structure to make sure there’s nobody in there and we haven’t found anybody in there at all,” he told Neil Mitchell.

Mr Swiney says the buildings “probably will need to be demolished”.

“It’s known as a third alarm fire, which is quite a big structure fire.

“There was large amounts of smoke and flames billowing from the three storey building.”

All inbound lanes on the Burwood Highway were closed to traffic at the Mountain Highway during the morning peak.

The freeway has now reopened. 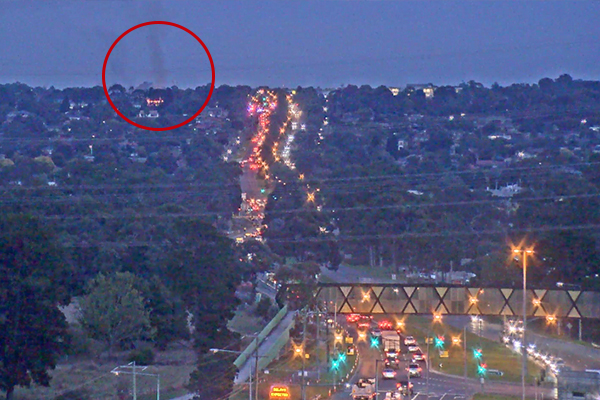