After yesterday’s announcement that fishing is permitted in Melbourne, but only within five kilometres of home, one man has taken to fishing on a footpath outside Hawkstowe Station.

South Morang man, Warren, set himself up on the side of the road with a wading pool, a fishing rod and a sign that says “best fishing in 5 kilometres”.

“My nearest lake is 6.2 kilometres away, so I can’t go there. So I went to Plenty Road,” he told Dee Dee.

Warren said he was careful to ensure he didn’t break any rules, and only stayed out for two hours.

“I even had a police car drive past. They gave me a thumbs up and a wave!”

Chris spotted the fishing stunt, which he said gave motorists a laugh.

“I just about had to stop and pull over because I was laughing so much. I thought afterwards ‘I better go deliver him a six pack of beer!’,” he told Dee Dee.

“It made everyone’s day.” 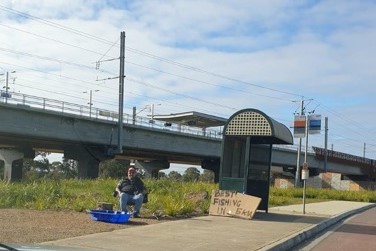