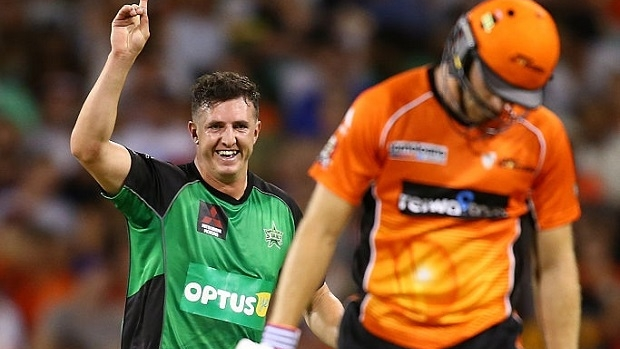 The Melbourne Stars have produced a stunning form turnaround to scorch Perth’s hopes of another home Big Bash League semi-final.

The Stars will now host the Scorchers at the MCG next Friday night after winning by 52 runs in front of a record crowd of 20,804 at `The Furnace’ in Perth.

It’s the fifth straight season that the Stars have contested the BBL finals – a feat also equalled by the Scorchers.

Batting first, the equation for the Stars was to win by 38 runs or greater to unseat the Scorchers from second spot on the ladder.

A brilliant bowling performance, spearheaded by Dan Worrall (3-15 off four overs) and Ben Hilfenhaus (3-17 off three overs), saw the Stars dismiss the Scorchers for 94 – just the second time they have failed to score 100 in the Big Bash League.

Ironically, the other occasion also came against the Stars at the WACA, when they were routed for just 69 back in BBL02.

Only Scorchers captain Adam Voges, who finished 46 not out, Ashton Turner (11) and Andrew Tye (10) passed double figures in the side’s worst performance for a long time.

As the wickets fell, all interest turned to see whether the Scorchers could reach a total of 109 that would have ensured they stayed ahead of the Stars on net run rate.

Ultimately they failed and will now have to regroup and head across the country to confront the Stars at the MCG next week.

The Stars are yet to win a semi-final, having lost their previous four while the Scorchers have contested all four BBL Grand Finals, winning the oast two.

Earlier, the Stars batted aggressively through their innings knowing the situation that confronted them if they were to secure a home semi-final.

Gulbis and Worrall added a handy 27 runs for the ninth wicket, a new record for the Stars that ultimately proved vital in the final result.

Young paceman Matt Dixon, making his first appearance of the season and first for the Scorchers in more than a year, claimed career-best figures of 3-32 from his four overs.

Andrew Tye continued to push his case for selection in Australia’s Twenty20 World Cup squad, claiming 2-25 from his four overs to give him 13 scalps in BBL05.