A serious multi-vehicle crash forced the closure of all in-bound lanes of the Monash Freeway for more than four hours this morning.

Traffic reporter Sebastian Cant described the incident as “the worst incident involving vehicles and trucks I have ever seen”. 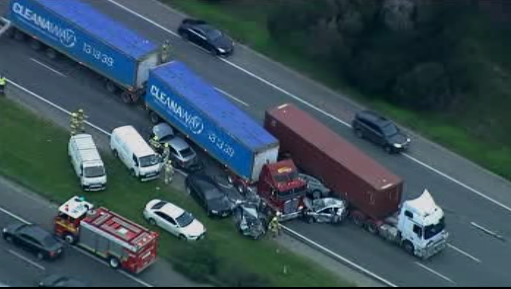 Press PLAY below for the latest traffic report.

The freeway was closed inbound, with delays are banking back to Eastlink during the peak rush.

All lanes were reopened just before midday.

Three people have been hospitalised following the accident.

One person has been taken to The Alfred in a stable condition.

Two patients are being treated for minor injuries.

The cause of the crash is not yet clear.

“I thought the freeway would be closed for many, many hours, but hearing from ambulance reports there may be just a couple of minor injuries, which is a fair miracle,” Brad Arnold from VicRoads said.

Press PLAY below for more details.