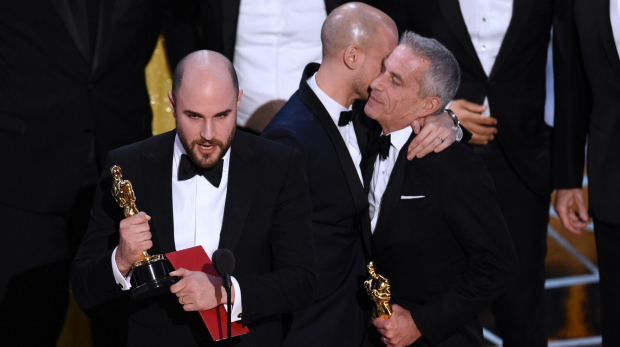 In what will easily go down as the greatest on-air stuff-up in Oscar history, the award for Best Film was wrongly given to the musical La La Land rather than to the rightful winner, the African-American drama Moonlight.

Presenting the award, veterans Warren Beatty and Faye Dunaway, there to mark the 50th anniversary of their 1967 film Bonnie & Clyde, were apparently confused because their envelope contained a copy of the card announcing Emma Stone as Best Actress winner for La La Land, which she had collected moments ago.

After a befuddled Dunaway read out La La Land as the winner, a contingent of very happy people from the film took to the stage.

Producer Jordan Horowitz made an impressive acceptance speech before the huge mistake came to light and he called the Moonlight crew up to the stage telling them they had won.

As confused as everybody else about what was happening, the Moonlight people were coaxed onto the stage as Horowitz held up the correct card – clearly naming Moonlight as the Best Picture winner – for the cameras to see.

According to the hasty explanation offered by Beatty as Moonlight people hugged each other in the background, the wrong card was in the envelope. An investigation is clearly underway to explain how this was possible.

Though the history of the Oscars is peppered with technical glitches, flubs, snubs, insults, gaffes and unofficial stunts – the most memorable being the streaker who in 1974 failed to upstage a witty David Niven – there has never been an on-air screw-up of this magnitude.

In any case, Moonlight director Barry Jenkins stepped up and offered an impromptu acceptance speech that perfectly captured the confusion and elation of the moment:

‘Very clearly, even in my dreams this could not be true, but to hell with dreams. I’m done with it because this is true,’ he said. ‘Oh my goodness.’ Crowd goes wild. ‘And I have to say it is true, it’s not fake. We’ve been on the road with these guys for so long and that was so great and so generous of them. My love to La La Land, my love to everybody, man.’

Moonlight had already won best supporting actor for Mahershala Ali and best adapted screenplay for Jenkins and Tarell Alvin McCraney (based on his play In Moonlight Black Boys Look Blue).

Unfortunately it turned out to be a dry night for Australian films. Despite a swag of nominations for Lion (six), Hacksaw Ridge (six) and a best foreign language nod for Tanna, only two awards were collected, both for Hacksaw Ridge, which took best editing and best sound mixing.

Still, there’s no doubting how the number of nominations reflect the depth to which Australian and New Zealand film-making talent is now embedded in Hollywood.

Affleck’s was the most humble speech of the night: ‘I wish I had something bigger and more meaningful to say,’ he muttered. Runner-up was when Emma Stone put her triumph down to the ‘confluence of luck and opportunity’. What class.

The show itself was the usual blend of high lights and low farce – the one big difference, of course, being that the left-leaning Hollywood crowd wanted to be fed the same political punchline over and over.

Charged with dubious honour of hosting the 89th Oscars ceremony, it fell to Jimmy Kimmel – a US talk show host largely unknown here – to oblige the over-dressed horde.

Frankly, he did a largely lousy job, lacing his opening monologue and much of his between-awards routines with predictable, predictably flat jokes jabbing at US President Donald J Trump.

Nothing wrong with that, yet the big responses to the low-calibre gaggery exposed just how partisan the room was. He thanked Trump because ‘remember last year when it seemed like the Oscars were racist?’ Roars followed.

He also tried spinning comedy gold out of Trump’s description of Meryl Streep as being ‘overrated’, yet the piece was strained and when her nomination clip for Florence Foster Jenkins came up, it served to suggest that Trump might actually have a point.

In what could have been a lovely piece of techno-mischief, Kimmel did try humiliating the President on Twitter (his favourite means of communicating), but was hampered by seeming to not quite know how the Twitter platform actually works.

Much funnier was the running gag about his ‘feud’ with Matt Damon. The skit where Kimmel spoofed the show’s theme of ‘inspiration’ where he deconstructed with earnest mock-seriousness Damon’s performance in We Bought a Zoo was a lovely piece of mockery.

But the ceremony’s big comic highlight involved a busload of unwitting Hollywood tourists who, thinking they were on a standard bus tour, were brought into the theatre.

In a state of gradual shock they were introduced to actors sitting in the front row. Priceless among them was Vicky, who was there with her fiance and who managed to get her favourite actor, Denzel Washington, to marry them. He obliged. A truly wonderful moment.

As sad as the In Memoriam segment is each year, there was added sadness with the untimely passing on Oscar Eve of actor Bill Paxton (Titanic; Aliens) from heart surgery. He was only 61.

On the flip side, a peak of universal glee was hit when the girls from Hidden Figures – Janelle Monae, Octavia Spencer and Taraji P. Henson – wheeled out 98 year-old Katherine Johnson, one of the actual African-American NASA mathematicians portrayed in the film (by Henson). She received a standing ovation, one of many given throughout the ceremony but one of the very few that was actually earned.

As expected, many acceptance speeches were spiced with politically pointed comments in reaction to Trump policies.

Typical was from co-director Clark Spencer who, winning Best Animated Feature for Zootopia, said of his adorable talking-animal cartoon: ‘We are so grateful to the audiences all over the world that embraced this film with this story of tolerance being more powerful than fear of the other.’

Moments earlier, while introducing the nominees, actor Gael Garcia Bernal got in on the act, declaring how: ‘As a Mexican, as a Latin American and a migrant worker, as a human being I am against any form of wall that wants to separate us.’

Yet it was Asghar Farhadi, Iranian director of Best Foreign Language Film winner The Salesman, who delivered the most powerful political statement of the night.

He wasn’t there to accept the award, an avatar announced. Farhadi was refusing to attend the Oscars in protest to Trump’s ‘inhumane law that bans immigration to the U.S.’

The boycott was a decidedly limited one, however, for while Farhadi was too disgusted with American foreign policy to attend the ceremony, he wasn’t quite so disgusted to refuse the Oscar outright, which surely would have driven his point home much more effectively.

Just how all this Trump-weighted commentary shapes up will be revealed by the ratings. Oscar has been struggling for viewers for years, so it’ll be interesting to see how a country that just voted Trump into office will respond to a show that would pretty much like him out.

But if there was one real disappointment it’s that The Jungle Book won Best Visual Effects over Rogue One: A Star Wars Story.

Given Oscar’s proud tradition of acknowledging new benchmarks in visual effects technology – they really should televise those tech achievement awards – one would have expected the respectful resurrection of Peter Cushing would have more than qualified.