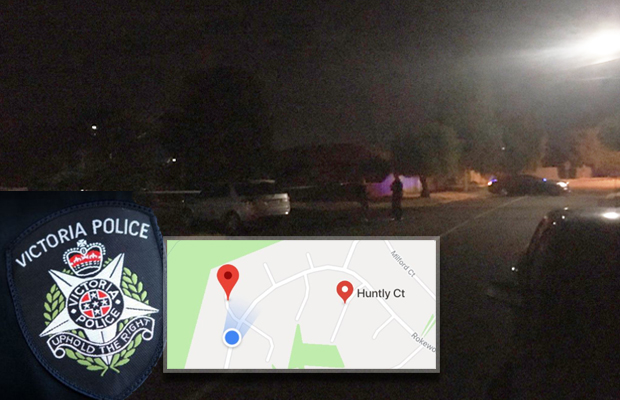 Two men have been shot dead in Meadow Heights overnight.

One man was found dead on Huntly Court and the other was found in Morris Court about 10.15pm.

One of the victims was seen being pushed by another man in a shopping trolley.

The man in the trolley told a witness he’d been shot twice and asked him to call police, the witness went inside his home and called Triple 0 and when he came back outside the man was gone.

A man believed to be one of the victims of a fatal, double shooting in Meadow Heights was seen being pushed by another man in a shopping trolley. @3AW693 pic.twitter.com/B3oNAdr48N

“A 40-year-old and a 28-year-old have been shot as a result of contact between themselves and other parties,” Commissioner Frewen said.

“Both between Friday, Sunday and last night’s shootings we’ve got no evidence to connect any of the shootings or people to each other in each of the circumstances.”

Four men have now been shot dead across Melbourne in as many days.

“We’re back to the bad old days of gang wars,” Neil Mitchell said.

“Did you see the dash cam footage (of Friday night’s incident in Kensington)? It was pure Los Angeles, not Melbourne, men running around shooting in the street.

Veteran Herald Sun crime reporter Mark Buttler told Neil some of the men police are searching for in relation to these matters have been wanted by Victoria Police for about “10 years”.

“There appears to have been quite a bit of conflict between parties involved in the Kensington shooting prior to what happened on Friday night,” Mark said.

Two men aged in their 30s shot dead in Meadow Heights, north of Melbourne overnight. One found on Huntly Court, the other Morris Court at 10:15pm. It’s the latest in a string of shootings that’s left four dead in four days. @3AW693 pic.twitter.com/B4nrU82v9S

The circumstances surrounding the fatal shootings not yet known, including whether the men shot each other or there are more gunmen on the run.

The homicide squad is investigating.

One witness who lives on Morris Court told 3AW she didn’t hear any shots but become aware of a man moaning.

She thought he was drunk before looking outside to see a man lying on the ground, surrounded by police.

The overnight violence is the latest in a string of fatal shootings across Melbourne that have left four people dead and two people in hospital in the past five days.