Police have released an image of the man they are searching for over last night’s hit-run in the CBD which injured a pedestrian.

The driver appears to be Caucasian, approximately 180cm tall with brown balding hair, aged in his 20s to 30s and was wearing dark clothing.

In CCTV footage immediately after the incident, the man can be seen ditching his hat and dark jumper as he flees the scene.

The pedestrian spent the night in hospital but has since been released.

The driver refused to stop and later crashed the car at the corner of A’Beckett Street and Queen Street.

He smashed into three vehicles, traffic lights and a pedestrian was injured.

The pedestrian was taken to hospital with serious but non-life threatening injuries.

Both the driver of the stolen car and his passenger fled the scene.

The driver is described as Caucasian with hair tied back and wearing a hi-visibility top.

His passenger is described as Caucasian with brown hair and a grey top.

In a separate incident, not related to the above, a car hit a pedestrian on Market Street within about 10 minutes of the hit-run.

It had been reported multiple people were hit. Police later revised that number to one. 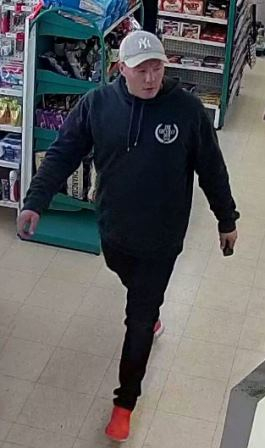