The state opposition has inferred Daniel Andrews covered up the circumstances around his fall, fuelling nonsense rumours about the Premier.

Shadow Treasurer Louise Staley yesterday released a list of questions she wants Mr Andrews to address before he returns to work.

Among the questions is one asking whether he was interviewed by police about anything that occurred during the weekend of his fall.

Neil Mitchell quashed the “ugly, ridiculous rumours” about the Premier which are currently circulating.

“I’ve spoken to some of the people named in those rumours and they deny them flatly, unequivocally,” he said.

The 3AW Mornings host shared what he thinks is the real reason why Victorians have heard so little from Daniel Andrews since his fall.

“People are reading a great deal into the fact he hasn’t been seen,” he said.

“I don’t think it’s sinister that he hasn’t been seen — I think it’s a tactic.

“I think the minders have seen he’s perhaps gone a little bit on the nose, and the quieter he stays on this the better it is, not just for his health but for his political health.

“The man has been badly injured, the doctors I speak to are not surprised it’s taking him this long to recover.”

Press PLAY below for more from Neil Mitchell

Ambulance Victoria this morning released the following statement in relation to the Premier’s fall. 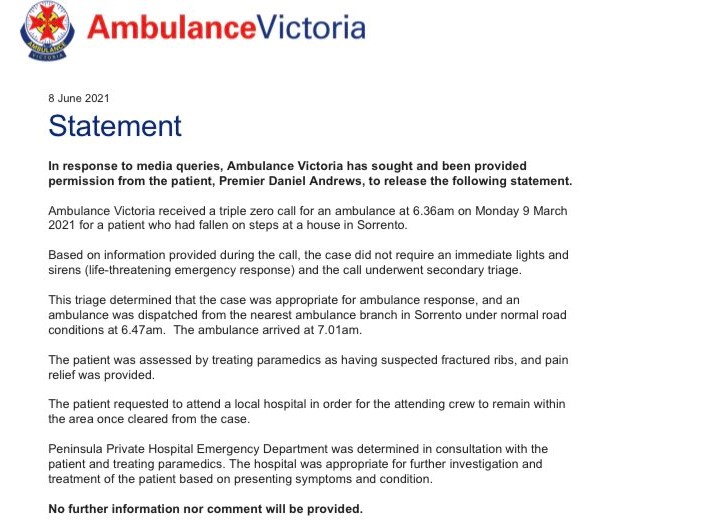