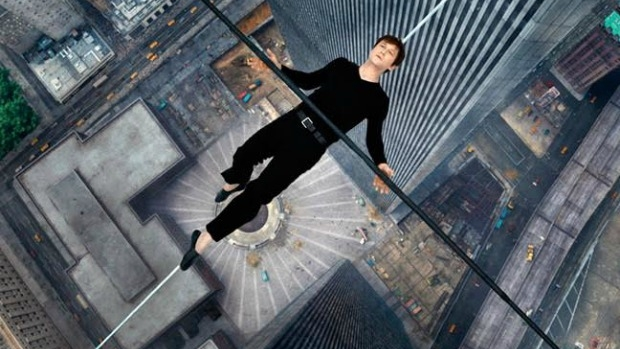 As if to counter the sad fact that most people, including an entire generation of Millennials, automatically associate the Twin Towers of New York’s World Trade Centre with their destruction during the terrorist attacks of 11 September 2001, director Robert Zemeckis takes us back to that innocent point in their infancy when their sky-skewering scale inspired a budding French tightrope walker to conquer them.

Structured much like a heist movie – as was the wonderful Oscar-winning 2008 documentary about the venture Man on Wire – Philippe Petit (a French accented Joseph Gordon-Levitt) gathers his crew, including a crusty circus manager (Ben Kingsley), and heads to the city to plan and execute the deed, all for the benefit of sanguine street-borne New Yorkers suffering through the doldrums of Vietnam, Watergate and a major recession.

Zemeckis takes too long with the backstory, but once the sneaking around at the towers begins the film takes on the qualities of a giddy high-end thriller.

The payoff, of course, comes when the camera arcs over Petit as he takes his first gingerly step onto the wire, gliding over the lip of the tower to reveal the vertiginous chasm below.

And it’s pretty damned awesome, an extended recreation of the feat that is worth the price of admission alone. Zemeckis, a long-time master of harnessing the power of visual effects for emotional punch (Forrest Gump; Back to the Future; Contact; Cast Away), stages the walk with a vividness so staggering it has had some sensitive patrons suffering from vertigo and losing their lunch (so please be warned!).

With the exception of those unfortunates, most people should find the film’s finale stunning as The Walk fulfils its unstated though obvious brief to present a factually based urban fairy tale designed to recast the towers as beacons of wonder and beauty rather than as symbols of terror.

The story is even narrated like a fairy tale with Petit recounting his exploits from atop the Statue of Liberty, the towers soaring proudly, almost defiantly, in the background.

Australian actress Emily Browning (Sucker Punch; Sleeping Beauty) is neatly cast as Reggie’s girlfriend (it was Ronnie who was into boys), as is Christopher Eccleston as their police nemesis Leonard ‘Nipper’ Read and the fabulous David Thewlis (Naked) who does a great job as the Krays’ accountant.

The loving recreation of the period is enhanced by Helgeland’s love of long shots – an early scene in a nightclub is extraordinary – and there are appreciable spikes of humour to offset the nastier moments, which includes a stabbing that leaves nothing to the imagination.

The film might not quite be up there with classic British crime films such as The Long Good Friday, but it makes a good companion piece to the fine 1990s film The Krays by Peter Medak (starring twins Martin & Gary Kemp from the band Spandau Ballet).

And in the tradition of gangster films, Legend shares that common trait wherein the bad guys adhere to a self-penned code of ethics designed to create the illusion that there is some behavioural order in the violent chaos of organised crime.

(Check out our interview with Brian Helgeland)

With love from India: Tannishtha Chatterjee and Brett Lee star in the thin rom-com unIndian

An Australian English teacher (Brett Lee) and an Indian divorcee (Tannishtha Chatterjee) fall in love in this strained, papadum-thin romantic comedy that is way too long and way too short on laughs.

Despite his obvious enthusiasm, retired cricketing great Brett Lee struggles for air here, especially when sharing the frame with his more experienced co-star.

There’s no denying the film’s upbeat feel, and in that spirit it would be lovely to see the film make a killing here and in India as a reward for its sweet intentions, though it’s hard to imagine even Lee’s stature in India overcoming his stiffness on screen. But, man, it’s tough to sit through.

Grand designs: Tom Hiddleton stands before one of the impressive sets in the otherwise awful Crimson Peak

Urgh. Another slice of over-designed pseudo-gothic crud from the criminally over-rated Guillermo del Toro, who has dutifully followed up his Transformers knock-off Pacific Rim with a bloated, empty-headed haunted house jaunt.

Students of set decoration will relish the amount of work that’s gone into Crimson Peak, no risk, but del Toro’s signature inability to snap his characters out of their mono-dimensional postures keeps this cinematic burp from even coming near anything truly Gothic.

And please note: the prehistoric cliche of a pretty woman holding a candelabra while gingerly walking down a dark corridor does not count. That’s how bad the film gets.

As for the haunted mansion itself, magnificent though its design may be, it doesn’t even make any sense. Even if it is haunted, wouldn’t you at least repeair that great big hole in the roof? Think of the resale value.