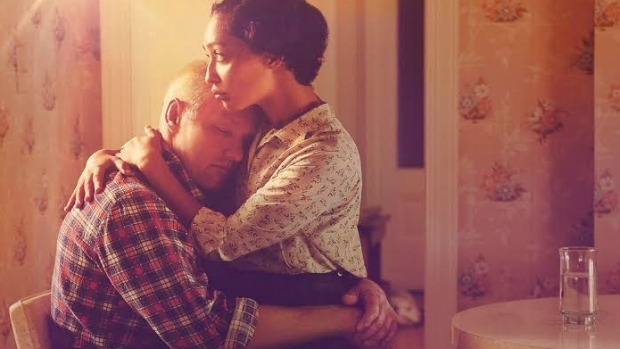 It remains an anomaly of this year’s Oscars how, amidst all the adulation poured over  films with racial themes, Loving barely rated a mention alongside Hidden Figures, Moonlight and Fences.

It did earn a richly deserved best actress nod for Ruth Negga but, oddly, that was it.

Set in the American South during the 1960s it tells the relatively simple, true-life story of a struggling, working-class interracial couple, Richard and Mildred Loving (Joel Edgerton and Negga), whose marriage offended the laws of Virginia so much they were ordered to leave the state for 25 years.

Concerned chiefly with getting on with their lives, they do as instructed and move. It’s only when the powerful voice of the Civil Rights movement enters their home via a television set that they become swept up with the you-don’t-have-to-take-this-anymore vibe of the time and pursue their case for justice through the courts.

This is a terrific movie and a big part of the appeal of Loving is its modesty and lack of histrionics, which sets it apart from the other Oscar-nominated films.

As played by Edgerton and Negga, the couple do not see themselves as heroes or pioneers, even though theirs would be the first case of its type. While not slow-witted, Richard is a quiet, hard-working man with no airs or ambitions other than to secure a happy and safe home from his growing family. It’s a touching portrait thanks to Edgerton’s carefully modulated, low-energy performance. Mildred makes for an understated, diffident matriarch who needs to be cajoled into getting her cause moving.

Directed and written by Jeff Nichols (Take Shelter; Midnight Special), the film is leisurely paced and subdued in tone, freeing it from the ‘look at me’ style of Hidden Figures and Fences. Despite its eventual impact – the case changed the law – the event is presented as an historical footnote, something pursued by two ordinary people who wanted nothing more than to be left alone.

It’s that lack of self-importance – a rare quality in Oscar-calibre films these days – that underscores the quiet power of this remarkable, moving film.

It’s a tough task blending teen romance with sci-fi, but director Peter Chelsom (Funny Bones; Serendipity; Shall We Dance?) concocts a pretty good hybrid in a film that delivers some enjoyable high-concept story ideas while turning the trusty fish-out-of-water convention up to 11.

In a believably conceived near-future, the intriguing premise has a female astronaut discovering she is pregnant while on her way to a four-year mission to colonise Mars. She doesn’t survive but her son does.

With the mission’s director (Gary Oldman in fine form) petrified about the public backlash he orders the incident to be kept secret, with the boy to be raised among the outpost’s scientists, presumably forever.

However, with the kid growing into a feisty teen (played by Asa Butterfield, from Martin Scorsese’s Hugo) come all the usual rebellious impulses. Hungry for information about his mother, his father and increasingly curious about Earth and the online friend he has nurtured called Tulsa (Britt Robertson) – mainly by convincing her he is homebound by illness, not a native of Mars – he begins misbehaving.

Rather than deny him any further he is sent to Earth, but his impulse to explore and discover soon has him on the loose, hooking up with Tulsa while the authorities give chase, hoping to catch him before Earth’s atmosphere causes his heart to explode.

Once the romance hits there is a pretty high mush element to cope with and which could have been dialled down, yet the film’s intriguing premise and drive keeps you engaged in the oddball adventure. Admittedly the ‘twists’ will come as little surprise to seasoned filmgoers, yet it still manages to deliver the desired punch.

Mother and daughter actors Rachel Ward and Matilda Brown play the psychiatrist who treats him before inevitably falling in love with him, even though they know their romance is doomed to die.

It’s a complicated idea to pull off and there are moments where one wishes Otto’s brooding, philosophical bent could have been morphed into something a tad more playful.

Still, as far as arthouse fare goes, it’s a well-made, theme-rich venture that deploys a variety of inventive techniques, though the debt the film owes to Woody Allen’s seminal 1983 work Zelig is worn a little too clearly on its sleeve.