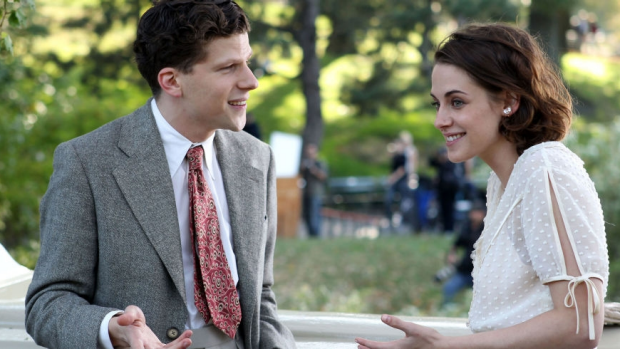 Though happily married, Phil is madly in love with his secretary Veronica (Kristen Stewart). The situation becomes more complicated when Bobby, unaware of the affair, falls for her too.

This breezily directed effort is lighter on laughs than usual as Allen explores with considerable punch one of his favourite themes, being the oh-so-unstoppable force of love.

The background to this has become tabloid legend. ‘The heart wants what it wants,’ Allen famously told Time magazine in August 1992 as he discussed his love for Soon Yi, who he fell for while in a relationship with her mother Mia Farrow. It was a costly scandal for Allen, but the power of love has been a central pre-occupation for him ever since.

The film turns on notion of how helpless even the most controlled and responsible men become when confronted by an all-consuming passion, and Allen – perhaps in spite of his usual tragedian instincts – is able to work this through without resorting to glumness or predictable theatrics.

Again proving how good he can be away from outright comedy, Carell excells with a performance that maintains a veneer of normality while his personal life goes through turmoil. As for Eisenberg, so good in To Rome With Love, Allen might have found his Gen-Y surrogate.

A subdued Stewart and the radiant Blake Lively round out a typically solid ensemble for one of Allen’s more refined and heartfelt efforts. Allen himself does not appear – since 2004’s Melinda & Melinda, Allen’s best movies have not featured him – though he does provide an efficient narration that helps him cover an enormous amount of dramatic terrain with admirable concision.

In a forcefully paced adventure Reacher, now working as a freelance investigator for the US military, teams up with his Washington DC-based handler (a very able Cobie Smulders), who has been framed for murder and arms dealing. Together they’ve got to go through the usual follow-the-clues ritual as they try sorting out who has been selling American weapons to the bad guys in the Middle East.

Reacher is still the lone wolf tough guy who can do four guys at once without spilling his coffee or all that much blood, but notes of vulnerability have been injected this time around. The possibility that he might have a daughter (Danika Yarosh) is convincingly woven into the action plot and, together with Smulders, they form a kind of surrogate family.

There’s also a lot more bruising of Reacher than in the first film. Though author Lee Child was deliriously happy when Tom Cruise signed up to realise his print character into a fully-fledged movie hero, many people reacted against Cruise’s casting because he was too short for the role.

As if to acknowledge his lack of stature and highlight his physical limitations, Reacher does cop a few major whacks and falls here, with Cruise, of course, eager to be seen doing his own stunt work. He still ends up walking away, but at least he does so with a few more bumps and a limp.

Directed by Greg Motolla (Superbad, Adventureland, Paul), it’s a variation on spies-in-the-suburbs larks such as Mr & Mrs Smith and Killers, and as an action-comedy it simply lacks enough decent action or a decent laugh quotient. The film is likely to unspool better as a DVD time killer while waiting for the pizza to arrive, not as the centrepiece for a night out.

Moody, overlong supernatural teen drama in which a peer-pressure prone high schooler (Toby Wallace) is forced to face his inner demons on Halloween night, 1997, straight after school ends. Writer/director Nicholas Verso generates some effectively spooky moments as his verbose characters deal with bullying, friendship and their future, but the piece dawdles on for far too long, especially given the dare-you-to-guess-it finale.

The brave choice to eschew naturalism for a sort of heightened Goth tempo might work stylistically but it has the effect of keeping the characters at arm’s length.

(Check out our interview with Nicholas Verso.)

A scary kid in a haunted house. What more could you reasonably ask for from a solid, proficently made, undemanding and  – thankfully – unironic frightfest? Set in 1967 and shot in the non-showy style of the time (they’ve even used the old Universal logo!) a pseudo-clairvoyant bites off far more than she can chew when she begins horsing around with the spirits in her house via a store-bought Ouija board.

Tautly directed by Mike Flanagan (Before I Wake), the film is a prequel to the 2015 straight-to-DVD film Ouija. As the post-end credit scenes makes clear, there’s at least one more to come. If it’s as good as this one, bring it on.

Fairly petrifying Alex Gibney documentary about this cyber mega-menace called Stuxnet, the name given to a hyper-deceptive form of malware that can shut down cities and cause huge destruction if not contained. Absorbing, frightening and hopefully not prophetic, this is not a film that will enhance anyone’s faith or trust in that big, mysterious, lawless entity we quaintly refer to as ‘the online space’.