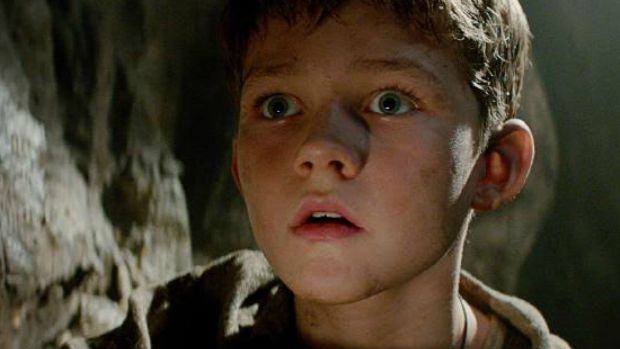 Well, pretty much everything else gets an origin story these days, so why not J.M Barrie’s Peter Pan?

Directed with a heavy-hand and a distinct lack of child-like fun by Joe Wright (Atonement; Hanna; Pride & Prejudice), this over-blown, try-hard fantasy-adventure spectacle is a noisy mish-mash of pseudo-mythology and digitally suped-up action that has far more in common with the over-cooked visual effects blizzards of the Pirates of the Caribbean movies than with the timeless 1953 Disney film, which, like it or not, is the universal reference point for Peter Pan.

Pan is too dark, too long and has too many slow spots, but it is not entirely without virtue.

Hugh Jackman has an obvious ball playing the nasty pirate Blackbeard, young Levi Miller is fine as Peter and there are some admittedly cool visual touches as pirate ships float through the air.

But as with The Phantom Menace, it seems the simple concept of having an ordinary kid become a hero is too, well, ordinary. Cue layers and layers of religious rituals and pretentious prattle about Chosen Ones.

For what is supposed to be a family film, Pan also features an awful lot of killing, including cold-blooded off-screen executions and – Tinkerbell-loving little girls be warned – the mass incineration of fairies using flame throwers. This could prove very upsetting to very young children expecting to see a fun-filled live-action cartoon.

Pan might not be your grand-daddy’s Peter Pan, but in a lot of ways you’ll wish it was.

(Watch our interview with Hugh Jackman)

Having already proved herself more than capable of kicking butt and conducting complicated exchanges of gunfire and roundhouse kicks in Edge of Tomorrow, Emily Blunt again steps up to bump up her credentials as today’s go-to action girl.

Based on real events, here she plays a sullen FBI agent who specialises in leading teams into armed drug houses and shutting them down.

Her belief that she is making a difference is shattered when approached by the head of another government agency (Josh Brolin) who invites her to join the dirty, semi-official war against those at the real heart of the drug trade just over the border in Mexico.

With a downbeat style and a mastery of orchestrating tension, director Denis Villeneuve (Incendies; Prisoners) presents a perspective of the American drug war where barbarism from the bad guys is countered by a resolution so steely it overlooks rules and morality for the greater good.

That this comes at a considerable human cost to those in the fight is the heart of this gutsy, rough-edged action drama.

What could possibly go wrong?: Ed Oxenbould (centre) gets ready for a nice time with his grandparents in The Visit

Two fun-loving teen siblings (Olivia DeJonge, Ed Oxenbould from Paper Planes) head off for a vacation with their loving grandparents but find that life on the family farm is crammed with strange behaviour and bizarre rituals.

After Lady in the Water, The Last Airbender and After Earth it was starting to look like Shyamalan had lost his touch but here, shooting on an obviously low-budget, he has thankfully found his feet again to do what he does best, which is get under your skin.

Unwelcome guest: Sullivan Stapleton plays a crim who moves into his friend’s life in Cut Snake

The lament of Michael Corleone (Al Pacino) – who, in Godfather III, mourned how ‘just when I thought I was out, they pull me back in’ – is echoed throughout in
Tony Ayres’ tough little crime drama about an ex-crim gone straight called Sparra (Alex Russell), whose quiet life with his fiance (Jessica De Gouw) is interrupted when a buffed-up old ‘friend’ (Sullivan Stapleton, a brooding presence) is released from prison and stakes a place out on Sparra’s couch.

Set in 1974 Sydney the piece is full of muted anger, growled dialogue, whispered threats and intimations of a hidden past.

Tough words build an oppressive atmosphere in what was tranquil domesticity.

But while Ayres – an accomplished director/producer whose diverse credits include The Slap and Home Song Stories – extracts strong  performances from his cast and recreates the period vividly he can’t quite deliver the pay-offs you need in a crime drama.

Much as we applaud the achievements of local filmmakers working on very small budgets, you can’t hand out free passes when those limitations hobble the flow and feel of a film.

Here when things get violent, the editing gets clumsy, resulting in a few too many unconvincing confrontations for the film to truly work. Example: in one scene an angry man with a gun is disarmed with a light spray from a garden hose.

Too many moments like that undercut what otherwise would have been a solid crime movie fable about guilt, obligation and persuasion.

Easily one of the best, most honest and funny teen movies to come out in years, Bel Powley (recently seen as the young Princess Margaret in A Royal Night Out) plays Minnie, a 15-year old girl living in the liberated air of 1976 San Francisco.

Her rampant sexual curiosity, as enthusiastically confided to her audio diary, leads her into a relationship with Monroe (Alexander Skarsgard), who is 35.

The coupling would be awkward enough without the added delight that he is also the boyfriend of Minnie’s mother Charlotte (Kristen Wiig).

Very confidently directed by first timer Marielle Heller and based on the book by Phoebe Gloeckner, this is not your standard teen-sex dramedy, and features many moments that cut so close to the emotional bone you can barely keep yourself from wincing.