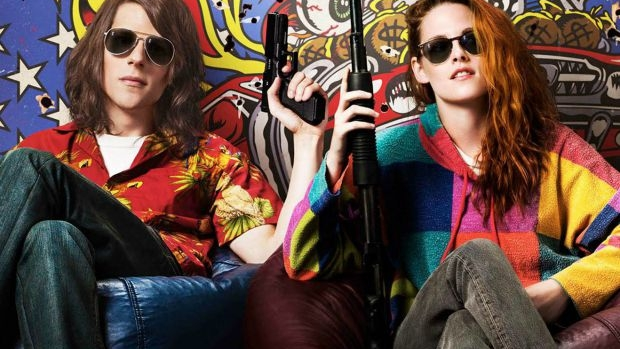 Strewn with f-bombs, m-bombs and plenty of anti-authoritarian posturing, the origin story of rappers Ice Cube, Eazy E and Dr Dre gets a good, if overly adulatory going over by director F Gary Gray (The Italian Job).

O’Shea Jackson, Jr. (Cube) Corey Hawkins (Dre) Jason Mitchell (E) are convincing as the young musos who channelled their rage against racism and bad cops into the rap band NWA, but it’s the ever-reliable Paul Giamatti who shines as their protective white producer.

The film does a very good job depicting the harassment they endured at the hands of the police – they couldn’t even stand on the curb to take a work break, for Pete’s sake – and the current spate of cop-vs-black-person incidents gives it an unintended topicality that no doubt partially accounts for its huge box office success.

The controversy over their famous anti-cop anthem is also given its due.

In one of the most generous pieces of movie casting ever, travel writer Bill Bryson is portrayed by Robert Redford in this lazy, feather-light adaptation of his book about walking the Appalachian Trail.

A shaggy Nick Nolte is along for the yomp, playing a pal battling the booze.

There are a few fun moments, such as when they get attacked by bears, and plenty of lovely scenery (of course), but there is way too little drama to justify all the meandering.

Bryson’s reason for doing the walk in the first place also disappears for some odd reason about half-way through.

The film should have been called A Half a Walk in the Woods.

Nerdy Jesse Eisdenberg as an action man? You better believe it as he devours his role as a slacker/CIA sleeper agent who is targeted for termination by a latter-day yuppie (Topher Grace).

Think of it as a stoner version of a Bourne movie. Oddly, the film flopped in the US, prompting its bewildered writer Max Landis (Chronicle) to wonder whether originality had a place in a movie market full of sequels, prequels and reboots.

Though it’s got all the ingredients, Me and Earl and the Dying Girl is not your typical teen tearjerker, though it works just as well and achieves precisely the same objective, thanks to a terrific trio of performances.

A typically lackadaisical high schooler Greg (Thomas Mann) is forced by his well-meaning mum to bond with fellow teen Rachel (Olivia Cooke), who has just been diagnosed with leukemia.

Reluctance on both parts and their all-knowing contempt for tearjerker story cliches nonetheless leads to a friendship that brings in Greg’s filmmaking pal Earl (Ronald Cyler II).

Directed by first-timer Alfonso Gomez-Rejon and based on the bestseller by Jesse Andrews, who also wrote the screenplay, the film pulls off the neat, ironic trick of being cliche-averse while achieving the same result as a traditional heart string-plucker.

A fine example of a film having its cake and eating it too.

Just because Jason Statham has moved on from the French action franchise doesn’t mean the movies are going to stop.

With the promise of another three films, Gaunt Brit rapper Ed Skrein steps into Statham’s shoes for a breezily paced car chase film that does exactly what it says on the label.

It’s hard to imagine anybody complaining that they didn’t get exactly what they expected. Here’s to the next two.