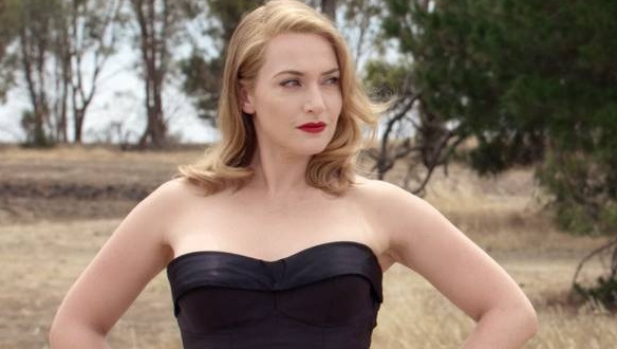 We’ve gone on quite a bit about what a great year it’s turning out to be for Australian film, but not quite so far as to use a clumsy metaphor.

So here goes, folks: if the high-quality of local films in 2015 can be seen as an over-sized serving of luxury dessert, then The Dressmaker would be well-cast as the big, fat cherry on top.

It’s a winning, whacky, hugely enjoyable slice of Australiana that begins with a whisper and ends with a heck of a bang.

Exuberant and brash, cheeky and sexy, sporting a dry sense of humour and a great ensemble cast, The Dressmaker unspools as a big, boisterous period comedy driven by a thirst for revenge, a desire for romance and – most important of all – a hunger to entertain.

Having been banished from her home town of Dungatar as a child, Tilly Dunnage (Kate Winslet) defiantly returns in 1951 as a world-travelled fashionista. Accused of a school-yard crime, she is determined to face down the small minds of her small town, exact some justice and reclaim her good name.

But first she has to deal with her fiery, wheel-chair bound harridan of a mother (Judy Davis), who has let the family home deteriorate into a state as haggard as her face. Looking as though she was cloned directly into her clothes, Davis is a delight as she works hard to wrench the film away from Winslet.

Be assured, this is Winslet’s film. Her classy combination of steely, single-minded purpose and down-home warmth are easy to embrace and relate to. Coupled to that, Winslet is now one of the most classically beautiful women in cinema, a quality the film’s superb cinematography is completely uninterested in hiding.

It’s hard to recall the last time an Aussie film was crammed with so much top-shelf talent. Best thing is, they all get their moment in the sun – or, in some cases, the mud.

In what could easily have been called A Fistful of Dior, director Jocelyn Moorhouse merrily mashes the tropes of the spaghetti western genre familiar to fans of Sergio Leone (The Good, The Bad and the Ugly, etc) with high-key comedy, fashion and the more conventional beats of a romantic period film to deliver a delicious cinematic treat that quickly establishes a giddy hold on its audience and never lets go.

Adapted from the 2000 novel by Rosalie Ham, Moorhouse smoothly blends together a sheaf of story strands as the ripples of Tilly’s balance-tilting impact on the town’s inhabitants fan out and touch everybody.

And this is one busy movie. There’s a lot going on as each scene neatly snaps another piece of the picture into place, and though the film has regular gear shifts in tone, that would only have been a problem had the direction not been so assured.

It’s also testament to the kind of frictionless narrative cohesion you get when a screenplay – co-written by Moorhouse and husband/director PJ Hogan of Muriel’s Wedding & My Best Friend’s Wedding – has been finessed for years.

It could be argued that The Dressmaker has a few too many storylines vying for attention, yet nothing in the film feels superfluous; everything comes together in a great third act that Sergio Leone would have been deliriously happy with.

Besides, given how much some of us old-school reviewers have suffered at the whim of Australian films that have had way too little story, the notion of The Dressmaker having too much story is a complaint that essentially serves as a compliment.

The sumptuous cinematography by veteran Don McAlpine glistens and glows in the Outback sun, with the clashing couture colours of Tilly’s outfits against the landscape giving the film a nice Priscilla echo. McAlpine likes filling his frame with detail, and his life-long mastery of light on display here explains why he was one of the first of many Australian cinematographers to receive a lot of love from Hollywood.

As well as being such a full-bodied, entertaining package, The Dressmaker marks the long-awaited return to feature films of director Jocelyn Moorhouse. Best known for her 1991 film Proof and her Hollywood venture How to Make an American Quilt, she shares with her main character the quality of somebody returning home to remind everybody who she is.

It’s clearly been way too long.

(See our interview with Jocelyn Moorhouse and producer Sue Maslin.)

Supernatural slicer: Vin Diesel with his favourite piece of cutlery in The Last Witch Hunter.

An all-but-imcomprehensible supernatural action mish-mash in which Vin Diesel plays an immortal modern-day witch hunter who tries bringing his priest pal (Michael Caine) back to life by doing plenty of violent things that apparently have something to do with killing witches. In a flurry of visual effects that include the now-mandatory blue energy bolts, Diesel and sidekick Elijah Wood stumble through a muddled story with the welcome aid of a few good jokes. A passable time killer that will lose nothing once it hits the vending machines.

Just Friends: Alison Brie and Jason Sudeikis in the quality sex comedy Sleeping with Other People.

Promiscuity gets another bad rap in another good sex comedy about how the spectre of love tends to spoil the spoils of allegedly loveless nookie. How much you enjoy this film will be index-linked to how credible you find funnyman Jason Sudeikis (Horrible Bosses) as a super-hot womaniser. Despite that hurdle, writer/director Leslye Headland (The Bachelorette) works over the sex-vs-friends premise born of When Harry Met Sally with vigour and insight as a stud tries maintaining a plutonic relationship with an attractive woman (Alison Brie). A perfectly good date film.