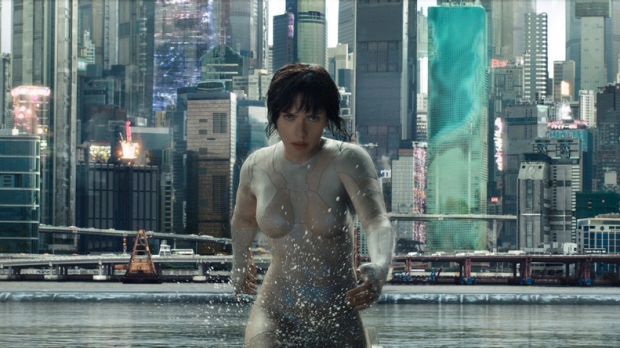 Clad in a series of unforgiving, form-fitting futuristic outfits, Scarlett Johansson plays ‘The Major’, the latest in a long line of sexy female cyborgs, in this slick, action-stuffed, high-gloss remake of the cult classic 1995 anime feature.

After an accident at sea, her brain is removed from a damaged body and implanted into a new generation of human/robot hybrids designed to enforce the law. With an assortment of super-human abilities (invisibility, super-strength) and a lot of firepower (of course) she sets about hunting down the enemies of the company that built her. This results in a lot of shattering glass, muzzle flash and pretty explosions, all of which occurs in a gleaming, towering mega-city full of neon-lit skyscrapers, giant hologram advertising and sleek cars.

Memory flashes give hints to her pre-cyborg life, so the search for her true identity – her ‘ghost’ – adds some dramatic grounding to all the film’s flashy chases and well-choreographed fighting. Although touted as a ‘live-action’ film, the amount of digital imagery involved suggests the film might actually contain more animation than the original film. And it is all sweet to the eye.

There’s been a strictly minor controversy over the casting of Johansson in the main role instead of an Asian. This has lead to shrill accusations of ‘white-washing’ but, really, it just comes down to sensible business.

There aren’t many female stars who can open a film globally, and if there was an Asian star with a bigger name than Johansson’s the producers probably would have cast her. In any case, ethnicity is not an issue in the story so the fuss over the casting seems like yet another example of politically correct critics searching for something to get angry about.

Just one warning: see the film in 2D if you can. The preview was in 3D and the process hasn’t improved; 3D simply does not enhance the film-going experience the way it promised. Ghosting, the loss of illumination and reflected light from inside the glasses just aren’t worth the extra dough. The format really is on the way out.

Solid, Oscar-nominated wartime drama about Denmark’s post-war policy of having the two million land mines implanted into Dutch beaches by the Germans to be removed by defeated German soldiers. Writer/director Martin Zandvliet does a superb job building tension as a crew of young recruits nervously dig these bombs out of the sand, though he retreats into cliche when it comes to developing the drama and we get the expected shifting of sentiment between the prisoners and their commanders as hostility turns to friendship. Still, it’s an affecting film highlighting a little-known story, with the opening reels showing just how strong the impulse for retribution was against the Nazis.

Controversial Egyptian director Mohamed Diab (Cairo 678)  delivers a jolting drama about the Egyptian Revolution, which sought and failed to bring fair and sensible government to the strife-torn nation.

Set entirely within the confines of a police van, the film chronicles a chaotic night after the newly appointed President Morsi was ousted. People from both sides of the political divide, as well as those with little interest in politics, are tossed into the van to engage in what is essentially a long screaming match with few rest breaks.

Diab is a dab hand at showing what is going on outside without his camera leaving the truck, so you certainly get a strong sense of scale.

A huge hit in his home country, the film’s message of co-existence is forged through a lot of sweaty conflict and Diab’s distinctly Hitchcockian device of forcing people to put up with each other.

Check out our interview with Mohamed Diab.