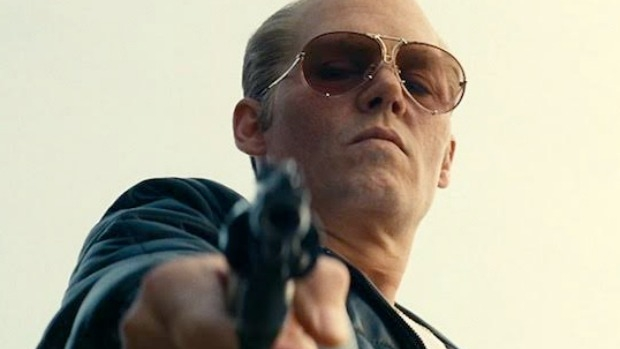 With a forehead bearing as much frontage as his turns as Hunter S Thompson, Johnny Depp deep dives into his sterling performance as real-life 1970s Boston crime boss Whitey Bulger with muted malevolence and a no-nonsense scowl.

Seduced into an alliance with the FBI via a childhood friend-turned-agent (an impressive Joel Edgerton), Bulger embarks on an officially sanctioned empire expansion program in exchange for what are supposed to be valuable tips about his criminal rivals.

Director Scott Copper (Crazy Heart; Out of the Furnace) casts an effectively gloomy pall over the ever-violent underworld here, though his striving for the type of energy we see in the crime films of Martin Scorsese fall short, as when they attempt to stage their version of the classic ‘you think I’m funny?’ scene from GoodFellas.

Black Mass is a grim, sturdy crime tract that owes everything to Depp’s immersive portrayal, even as it slowly peters out.

Of note is Bulger’s twisted code of ethics, a feature he shares with many other movie crime lords.

In the latest in a long string of cancer-related films, Toni Collette and Drew Barrymore play British best friends struggling to cope with the onset of cancer.

Likeable as their performances are, director Catherine Hardwicke (Twilight; Thirteen) strains to pump warmth and humour into the piece; too often moments that reach for realism stumble into mawkishness and emotional histrionics.

It’s the kind of forced feel-good film likely to play better on a small screen.

For a far better dramedy treatment on the subject, check out the under-appreciated 2011 film 50/50, starring Joseph Gordon-Levitt and Seth Rogen, directed by Jonathan Levine (Warm Bodies). It hits much closer to the mark.

All at sea: The crew of a fishing boat head out on a fateful voyage in the Maltese drama Simshar

Malta’s first foray into the international film market is a troubling, complex drama about the tiny island’s contemporary refugee dilemma as it finds itself host to endless boat loads of potential asylum seekers.

A very well-made film, first-time director Rebecca Cremona shows a sureness of touch countering the overarching politics of the scenario with the personal struggles of its humble, increasingly desperate characters.

It’s a deft balancing act that allows Simshar to project a resolutely human heart without needing to wear it on its sleeve.