North East Link hub closed for $620,000 renovation while public consultation on the project is underway

The North East Link Project’s Watsonia Hub has been closed for a huge $620,000 renovation, while public consultation of the project is underway.

The hub was set up to provide a space for the public to see what is planned for the project, and to ask questions about the plan.

The public hearing phase ends in mid-September, but the Watsonia hub is not set to reopen until late September.

Listener Bino tipped Neil Mitchell off to the works.

“It just beggars belief!,” he said.

“What was there before was, I thought, good enough for what it’s intended to do.

“It had the picture on the wall of the complete site and what happens at all the different points, a couple of desks, and people sitting there to help you out with any questions you had.”

“What we’ve got there is an old Commonwealth Bank that we’ve taken a lease on for up to eight years for the project,” he told Neil Mitchell.

“We did a very, very basic fit out to enable us to do our consultation over the last seven or eight months in the lead up to our panel that we’re in at the moment.

“We’ve taken the opportunity to close it while the panel is on for a couple of months just to really get it set up for the longer term.”

Mr Elliott said community consultation is not over because of the closure.

“It doesn’t mean the end of consultation by any stretch of the imagination … we do also have a site in Bulleen which continues to be in operation,” he said.

“For this project consultation will be ongoing for pretty much the whole delivery phase.”

“I can’t walk away from the fact it sounds like a lot of money, but it is a commercial building project that will set us up for the next eight years,” he said.

The renovation will create a space that can be divided into different meeting rooms to host multiple events concurrently, and new floor coverings, paint, bathrooms and a kitchen will be put in. The site will also be made fully accessible. 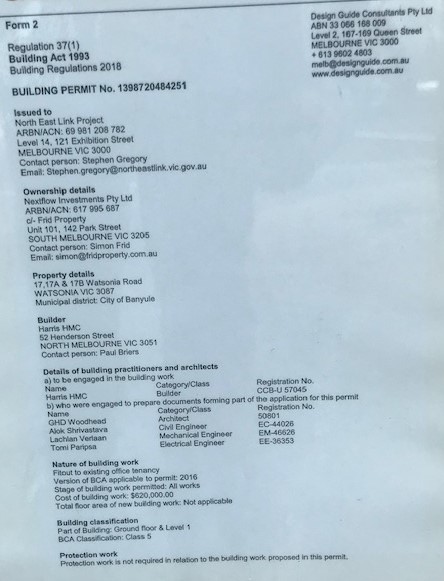