‘Notre-Dame is aflame’: Tears in the street as Paris hearts break 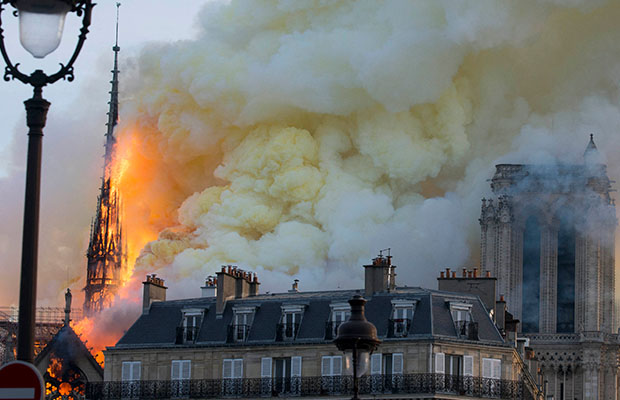 Notre Dame cathedral in Paris has been engulfed by an enormous fire.

The roof has been destroyed, and a steeple has collapsed into the burning body of the building, but hundreds of firefighters have been about save some parts of the structure.

It’s not yet known what started the fire, but it may be linked to renovations.

There are no deaths, although it’s believed one firefighter has been seriously injured.

“The city is slowly walking here. People are stopping by and pretty solemnly just staring at what remains of Notre Dame cathedral,” he said.

Just devastating to see the Notre Dame Cathedral burning. Absolutely devastating. The monument’s history, art, and iconic architecture is irreplaceable. The people of Paris, France, and Catholics around the world are in our prayers. #NotreDame pic.twitter.com/u8qutd3AkR

The blaze started about 2.30am, Melbourne time.

French president Emmanuel Macron arrived at the scene shortly after the fire broke out.

“Notre-Dame is aflame. Great emotion for the whole nation,” he tweeted.

“Our thoughts go out to all Catholics and to the French people.

“Like all of my fellow citizens, I am sad to see this part of us burn tonight.”

President Macron has vowed that the cathedral will be rebuilt.

The altar and other parts of the cathedral floor have been largely untouched.

Many of the priceless relics housed in the cathedral have also been spared.

Jesus’ Crown of Thorns has been saved, and 16 statues which surround the now collapsed spire were removed from Notre Dame last Thursday as part of the restoration project.

US president Donald Trump has conveyed his sadness, describing the Notre Dame as “one of the greatest treasures of the world”.

It grew iconic in popular culture through several artistic works, including the Victor Hugo novel The Hunchback of Notre Dame, which was published in 1831 and adapted by Disney in 1996.

About 13 million people now visit the Catholic landmark every year, believed to be the most visited structure in the French capital.

Chatting with Melbourne tram driver, David, now, who is in Paris on a holiday and captured this footage of the Notre Dame fire https://t.co/N5Nrr8nu3K

“I’ve seen a lot of fires through my career. This is a huge, HUGE fire.”

“There is a deep feeling of shock on the streets of Paris today.”

So sad to see such a thing of beauty go up in flames. I was there just 8 months ago with my son Jack. 850 years of history right behind us. Let’s hope Notre Dame can be saved and restored. #notredame #paris #france #notredamecathedral