OPINION: Shane McInnes says the AFL can learn plenty from the Super Bowl 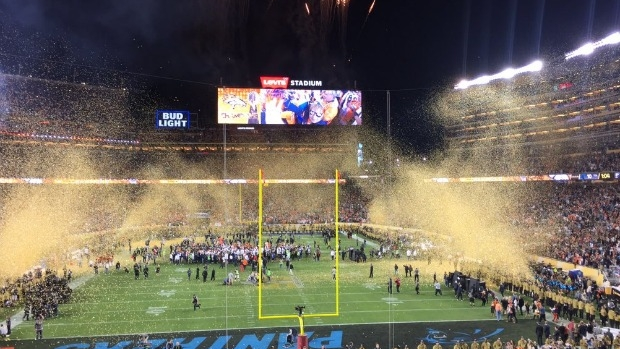 It’s time for the AFL to get the hint.

For the past seven days I’ve been fortunate enough to experience the festival of Super Bowl 50.

The already grand city of San Francisco, was converted into an NFL haven for locals, fans and tourists alike.

And then, there was the game itself.

The football itself left a bit to be desired, but the added elements of a half time show, pre game concert, and stunning national anthem, made it all an unforgettable experience.

Of course, the entire time, I was comparing in my mind with the AFL Grand Final.

In many ways unfair, given that America always likes to be bigger and better.

But, why can’t the AFL be bigger and better?

Why can’t the Grand Final get a write up in Time magazine?

And why can’t the AFL Grand Final be as much about the game, as the festival around it?

Here’s my ‘feasible four’ ideas the AFL can adopt on the back of Super Bowl 50.

This year’s Super Bowl started at 3:30 in the afternoon, allowing it to go live into the East Coast of America at 6:30. Primetime.

I’ve never been a fan of a night Grand Final, given the traditional breakfasts surrounding the game, and the desire people have to get an early start on that one day in September (or October as is the case this year).

But, to go twilight, and start the Grand Final at 4pm or 4:30, gives us the best of both worlds.

The match still starts at a reasonable time. Half time falls during sunset providing the perfect back drop (see below).

Fireworks, flashing lights; a sight to behold for those at the ground and at home.

Be it, pre match, half time, and post game, play music.

Hire a DJ for the day to play all the hits leading up to the game.

Run through the celebratory classics after the game while teams are celebrating.

But, then ramp it up.

Keep the buzz and the hype until the last of the patrons have exited the MCG.

This is a big one.

When compared with the Super Bowl, the Grand Final traditionally has its ‘big name’ act before the game.

That’s fine. But, surely you can sling them a couple extra grand, and have them come back out at half time?

The Auskick at half time is a great initiative, and a wonderful opportunity for kids.

But, Grand Final day, is THE day.

It needs to be memorable from start to finish. As for the Grand Final sprint… Why do we bother?

Half time needs to be spiced up.

It needs to keep a hundred thousand spectators in their seats.

Have the big name act.

And add in some colour.

Choreograph the hell out of it.

Bring in school students who would love the opportunity to perform as an ‘extra’ on Grand Final Day, and make it a spectacle no one wants to miss.

At the moment, it’s a bathroom and beer break for most.

On a side note, I think we could jazz up the atmosphere during the national anthem too.

Let’s not criticise the song, instead, let’s make its performance unmissable; Huge Australian flags, a big stage in the centre of the ground for the performer… For those three minutes, he or she should be the focus of a nation.

Grand Final week has such a terrific feel about it, but between the Brownlow and Grand Final Parade, it seems to take a lull.

Grand Final week should only build in momentum, not lose it at any stage.

The MCG fan zone last year, was the right idea… but, we need to go further.

There needs to be somewhere in the city (Fed Square, City Square) where fans can congregate for a beer, and a concert after work.

Make the MCG purely a fan zone and fan experience.

Link in with the National Sports Museum to highlight all the great moments are game has provided over the years.

And, then have a separate area for the ‘after work’ crowd, and those that want to be in party mode.

The more the Grand Final is about the fan, the more the AFL ultimately reaps the rewards.