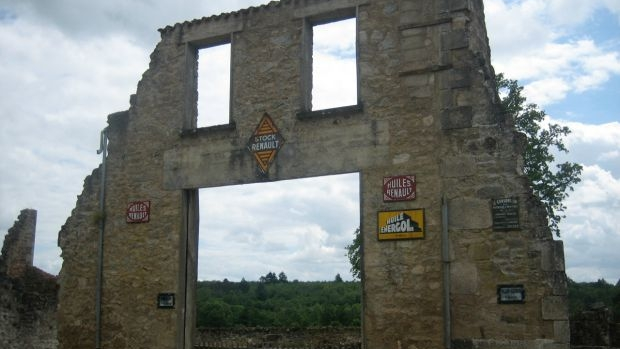 Last weekend on A Moveable Feast we had a French special involving tales of travel in France, food in France and finally drinking in France with Peter Nixon from Dan Murphy’s.

(The drinking bit was actually about drinking French wine and champagne in Australia, and Dan Murphy’s say they do stock an awful lot of very affordable French booze).

When it came to discussing travels, I asked whether anyone had been to a place called Oradour-sur-Glane, a place I visited maybe 15 years ago. We got a response from a listener called Ian Dakin who had been there and who subsequently provided us with some photos of his trip, which he kindly allowed us to accompany these notes (see below).

The reason Oradour-sur-Glane is such a singular place in French and world history, or travel generally, is its history dating from an awful day on June 10, 1944.

What had happened, of course, four days prior to that is that the D-Day landings had commenced and all available German fighting units were dispatched from wherever they were to deal with those invasions in the north of the country.

One of those units was the 2nd SS Panzer Division. They had been stationed in the south of France but now were ordered to help stop the Allied advance. When they reached the village of Oradour-sur-Glane on June 10, 1944, for reasons that are not entirely clear, they effectively murdered every man, woman and child in the village.

I had read that one child escaped, but on other readings you may find that possibly one child and six men escaped.

In all 642 men, women and children were massacred.

In the immediate aftermath of the massacre (which was highly unusual) the dead were buried in a cemetery roughly adjacent to the village, and the village itself was walled and has not been touched since.

You will see from Ian’s photographs just how poignant this is, with cars and tram lines still in the street, rusted and barely recognisable.

There are loads of simple signs in the village often simply saying ‘Souvenir’, or in English ‘Remember’.

Entry to the village is free. As Ian said in his email to us, it is yet another reminder of man’s capacity for inhumanity to his fellow man.

At some stage I think in the 1990s, or roughly thereabouts, a guy wrote a book claiming that the real reason the massacre had occurred was that the Germans were looking for a cache of gold, but I think it is generally believed that that theory is complete and utter bulltish.   It is generally accepted that the atrocity occurred in retaliation for partisan activity by the French Resistance in the area.

I would be interested whether anyone else has been to the village of Oradour-sur-Glane. Leave us a message on our Facebook page, or email feast@3aw.com.au.