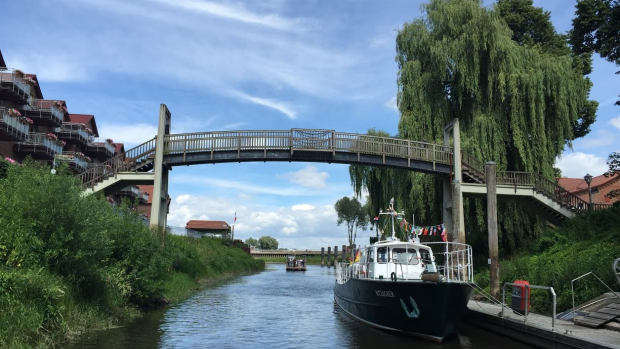 There I was at the Wadden Sea Unesco World Heritage site at Cuxhaven, feeling the mud squelching through my toes as I dug for worms on the tidal flats. My guide was a chatty chap who perhaps knew a little too much about these slippery and decidedly ugly lug worms that buried themselves under the sea bed, leaving trails of thousands of tiny hillocks of excrement (that resembled grey spaghettini).

Some visitors choose to walk the ten kilometres to the island of Neuwerk while others ride horseback. There are even horse carriages that will transport you. The visitor centre is brimming with insights and information on the sea life and why the site must continue to be protected.

It was in the late 19th century that an artists’ colony grew in the scenic village of Worpswede. Artists including Fritz Mackensen and Heinrich Vogeler founded the community where painters, poets and artists flocked because they wanted to connect with nature. They chose well. It is a place to admire works in quirky museums and intriguing galleries. There are vibrant indoor and outdoor exhibitions. There’s a lovely main street and pretty parks.

I took a ride on the River Hamme with Captain Klaus who kindly allowed me to steer the Torfkahn (peat tub) for a bit. Activities include bird watching, horse riding, cycling, fishing and in winter – ice skating on the river.

I strolled through the medieval city of Luneburg , stunned by the beautiful town hall and welcoming central square. It’s a cool university town, with houses made of half brick and half stone, and on the day I visited the city centre was preparing for a children’s street festival.

To the south of the city is Luneburg Heath, where I enjoyed a long, leisurely nature walk through just a tiny part of the 7,400 square kilometre stretch of land. The area is considered a culturally historic landscape where the huge horned moorland sheep called the Heideschnucke graze. I saw only one that day but consoled myself with a delicious hot ‘schockoccino’ at the caf?,  as the rain pelted down.  I had earlier walked to the highest spot on the Heath ? the Wilseder Berg ? at 169 metres high. It wasn’t too strenuous.  And the reserve has proudly established wheelchair accessible walks. It’s protected, so you can’t pick the blueberries but look out for tiny frogs hopping along the track. Or you can travel in a horse and carriage.

Not all the locals are happy that the marketing campaign to promote Hitzacker involves gnomes. There are big gnomes, small gnomes and every size in between peppering the place. Outside one major park, a taller-than-life-size smiling gnome welcomes all visitors with a grin and a hand-raised in-salute. The place itself is considered a ‘spa town’ on the River Elbe. It has an assortment of places that will pamper and offer treatments for all manner of ailments. You can hire ‘beach baskets’ which are adorable, compact, cosy and ideal for a restful/playful day on the sand. A boat trip along the River Elbe was wonderful. A packed lunch and stories of times gone by when the river was the border between East and West ensued.

Springboarding from Hitzacker, I visited the ‘Rundling Villages’ (in the Wendland area in rural Lower Saxony) that hark back to the medieval times when there were German overlords and Slavic subjects.

There used to be more than one thousand such villages but now there are only 95 left. They can’t be spotted from the main roads ? strategically hidden amongst or behind trees. The farmers who built the circular-shaped villages would divide the land into wedges and share evenly amongst themselves. After about 100 years, they stopped building the villages in such a fashion. For decades, a group of volunteers has been fighting to protect the villages and aiming to secure UNESCO World Heritage Status. I visited the open-air museum in Lubeln (a rundling village of course) which gave a vivid insight into the lives the farm folk led.

The writer travelled courtesy of the German National Tourist Office