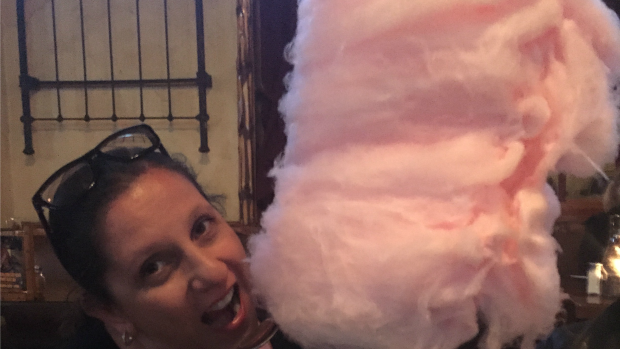 Often referred to as WeHo, the neighbourhood and its surrounds have abundant and interesting offerings for visitors. Here’s a checklist for those considering meandering through the diverse, interesting and fun place. By the way, not all places are smack bang in WeHo but close enough to count.

You will find classic American fare, such as ribs, macaroni and cheese and the biggest (it’s about two feet high) fairy floss dessert, coupled with adventurous entertainment, otherwise known as a bucking bull at the Saddle Ranch Chop House (8371 Sunset Boulevard, West Hollywood)

Don’t knock it until you try it. Gracias Madre (8905 Melrose Avenue, West Hollywood) lures those wanting to munch on vegan Mexican in a relaxed, outdoor courtyard . There’s also a beautiful bar inside and loads of indoor seating. I wasn’t mad for the fake bacon but most of the creations impressed. Lock on to the cocktails. Wow.

I stood in the queue at Pampas Grill for nearly an hour at Farmers Market (6333 W 3rd Street), inspired by the look of satisfaction on the faces of those carrying plates laden with Brazilian BBQ. There were succulent cuts of meat including chicken, beef and lamb on giant metal skewers and an array of salads. If you don’t (refuse to) queue, the selection of food, drink, confectionary, sauces etc at Farmers Market is overwhelming.

I may be accused of judging a place by its calamari salad. Happy to report that Chateau Marmont (8221 Sunset Boulevard, Los Angeles) which is steeped in Hollywood history, serves a delicately flavoured calamari salad that took me about an hour to eat. The reason? I was mesmerised by Leonardo Di Caprio sitting in the very same courtyard restaurant and extended my stay accordingly.

Palihouse (8465 Holloway Drive, West Hollywood) is a boutique, apartment style residence (it describes itself as an urban lodge) with expertly decorated rooms. So expertly put together, that I skipped a guaranteed great party to simply sit on the Chesterfield leather lounge and admire my surrounds. It’s warm, comforting, cool and collected. The eclectic art and superb (and incredibly healthy) breakfast truly satisfied.

The London (1020 N San Vincente Blvd, West Hollywood) is a swish hotel that incorporates quirky British notes such as a supremely elegant foyer, free calls to England and a brilliant-sized bath in a spacious bathroom. Excellent service and British bulldog (not a real one) greet you on arrival

The Mondrian (8440 Sunset Boulevard, West Hollywood) is hip. It’s cool. It’s as now as it ever was. Many a famous face has partied at the Sky Bar which hosts launches, romances, gatherings and fun times. The skyline view poolside is very special both day and night.

Sunset Marquis (1200 Alta Loma Rd, West Hollywood) has a stunning photographic exhibition in a gallery attached to its foyer. It is steeped in rock’n’roll history and has a tremendous pool. The hotel bar has just enough dark corners to satisfy those who wish to be left alone. The rooms are large and the art work mesmerising. Perhaps indulge in the self-contained villas. Yes, Benicio Del Toro was hanging around when I visited.

Other places include The Grafton which has been recently renovated, The Standard has a new restaurant, Chamberlain for a sweet boutique hotel with great rooftop and The Andaz for a slick, stylish and perfectly positioned location.

Actor Gyton Grantley directed me, via an instagram post raving about the breakfast burrito, to a tiny place called Cofax Coffee (440 N Fairfax Ave, LA). I made a beeline and was rewarded with quite a good latte. The caf? revels in its minimalist d?cor, serves Stumptown Coffee and home-made donuts and pastries.

Alfred Coffee (8509 Melrose Ave, West Hollywood) is tricky to locate but worth the effort. In an alley or perhaps i’ll call it a laneway, the super hip cafe serves really, really good coffee. The barista even managed a macchiato to satisfy the most extreme coffee snob (that’s me).

Melbourne entrepreneur Grant Smillie is kicking goals with his business partner David Combes at EP & LP (603 N La Cienega, West Hollywood. The restaurant and roof top bar is doing a roaring trade, with ingenious Thai (courtesy of Louis Tikaram) on the menu and ripping tunes on the decks. Al Pacino loves it.

The Abbey (692 North Robertson Boulevard, West Hollywood) has ‘themed’ nights which are simply super fun or completely outrageous ? depends on your take on life. The outdoor terrace is gorgeous and punters go crazy on the dance floors, the tables and probably, most nights, along the bars. It sure is a lively, gay lounge.

Fossick for bargains at Beverly Connection (100 N La Cienega, LA), which is possibly one of the ugliest shopping zones I’ve ever encountered. I love it. It has outlets such as Nordstrom Rack (high end to high street), Marshalls (great selection of footwear and homewares), T J Maxx lovely jewellery and bags amongst the clothing) and a monster sized Target (stocking quality towels and linen).

Beverly Center (8500 Beverly Blvd) has Macy’s, Bloomingdales, Diesel, Armani, Burberry, Prada, Forever 21 and more. Much more. Much, much more. Helpful hint: Macy’s gives tourists a ten per cent discount card that lasts three days. You head to the jewellery department, flash your passport and they’ll give you the card. Very handy.

Bikes and Hikes (8743 Santa Monica Blvd, West Hollywood) means you can discover LA via bike or on foot. There are customised tours or naturally, you can travel solo. And rest assured, there are fast, professional repairs at the West Hollywood bike outlet if you suffer a tyre puncture. How does a 21 speed hybrid bike with supplied helmet and map sound?

Oooh, so you want to actually burn some calories. Ok then, Cycle house (8511 Melrose Ave, West Hollywood), tucked away in an alley, is the place to check out, work up a sweat and while that happens you are donating two meals to someone in need. Yep. Combining health and fitness with altruism. What a fine institution. And dubbed by some as the best spin class in town. It’s fast, sweaty and 55 minutes per class. Phew.

Did someone mention ‘spa treatment?’ Henriksen spa (8622 Sunset Blvd, West Hollywood) is pure luxe. Stylish service and slick environs greet you. The spa backs onto a car park and doesn’t look flash from the outside but staff know how to pamper. Hmmm. Did I actually drift off to sleep? I believe that’s the sign of a fine facial.

Playlist Yoga (624 N La Cienega Blvd, West Hollywood) opened at the beginning of the year. It prides itself on it’s beats. There’s a chief music officer, the lockers have pop stars names and a massive slogan ‘Lose yourself in the music’ greets you. Relax, you must.

The writer was a guest of Qantas, Visit California, and Visit West Hollywood www.visitwesthollywood.com