A mother sleeping on Melbourne streets in a bid to protect her homeless, drug addict son has told Tony Jones of her pain.

Brisbane mother-of-five Leanne Thompson was pictured on the front page of the Herald Sun today standing over her son, Daniel.

She says Daniel is using synthetic marijuana and has been on the streets for several months.

“It’s very difficult to keep it together,” she said.

“I just keep questioning ‘Why?’.

“We have (four) other children, they’re all succeeding, doing very well in life.”

She has gone public in a bid to expose what she says is a growing problem on which the government needs to act.

“The government’s doing nothing to clean up the human misery … of this legal drug.”

This woman is extraordinary, but her struggle is sadly common @3AW693 @TJch9 the government needs to act and stop handballing parents

@3AW693 Leanne is incredible. To have to watch your child sleep on the streets. Thoughts with her family.

ON HER SON’S REACTION TO HER VIGIL
He doesn’t like it.
He doesn’t feel that he has a problem.
He just sees us as authority figures, when really we’re just loving parents who want to make sure our son’s OK.

HOW HER SON WENT FROM PRIVATE SCHOOLING TO THE STREET
I think just with his peers, smoking marijuana with them
It seems just a normal thing, these days.
He seems to have had a more adverse reaction to it than most people.

DO YOU THINK YOU’LL EVER HAVE YOUR SON BACK?
I really hope so.
I feel that the longer he spends on the street – it’s almost like a culture that becomes entrenched in them.
I’ve seen people there who’ve been living on the street for years and years.

HOW SHE EXPECTS HER SON TO REACT TO HER DECISION TO GO PUBLIC
I don’t think he’ll react very well to that at all, no.
I’ve wrestled with that, but I’m doing it for the right reasons and not the wrong the reasons – just to get him help, and not just him.
There are people in a far, far worse way than him. 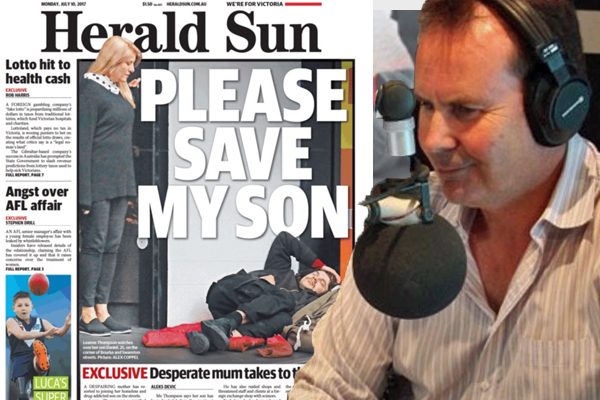