Above: Click PLAY to hear Justin and Kate cross live to Pat Mitchell at scene

The abandoned factory where a man was allegedly set on fire in Southbank has again gone up in flames.

Fire crews were called to the vacant factory on Hancock Street about 6.45am.

Hundreds of residents from nearby apartments were evacuated as flames were seen burning from the roof of the building.

Many of them woke to smoke in their bedrooms.

Residents in nearby apartment towers evacuated. Fire in vacant factory not yet under control. pic.twitter.com/DJjsMBICf6

There were initial fears squatters were still inside the factory as the fire burned, but MFB firefighters have since confirmed the building was empty.

Traffic is expected to affected for most of the morning.

Two people were arrested after a man was allegedly set alight in the factory last week. Smoke from the fire could be seen from outer suburbs. PHOTO: 3AW breakfast listener James Nixon 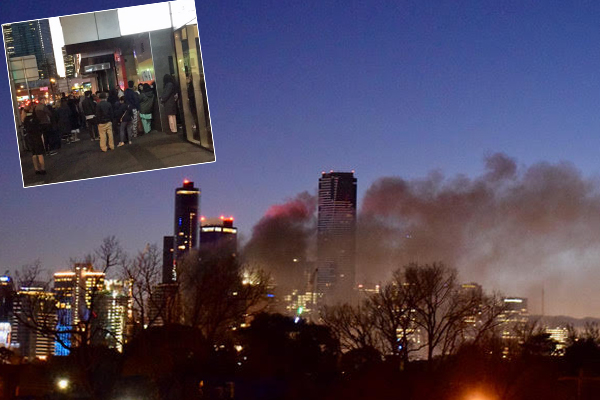