‘I’m being discriminated against’: Woman fired for supporting ‘No’ vote speaks out

The woman who was fired by her Canberra employer for supporting the ‘No’ vote to same-sex marriage says she feels hurt and bullied.

Madeline, seen below on Sky News, told Neil Mitchell despite the hurtful comments made by her boss, children’s party planner Madlin Sims, she doesn’t regret her actions.

“I’m just a Christian and its what I believe,” Madeline said.

“I do feel quite bullied, it’s quite unfair, I’m being discriminated against.”

Click PLAY above to hear the full interview with Madeline

Last month Madeline, who does not want her surname published, added a Coalition for Marriage ‘It’s OK to vote No’ Facebook filter to her profile photo.

Her employment was terminated shortly after.

Ms Sims took to Facebook to explain her reasoning, as seen below. 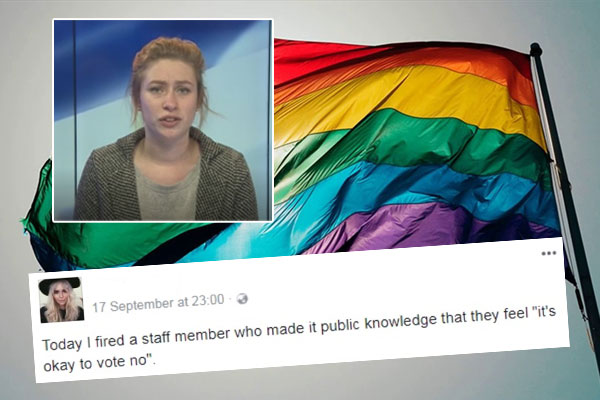