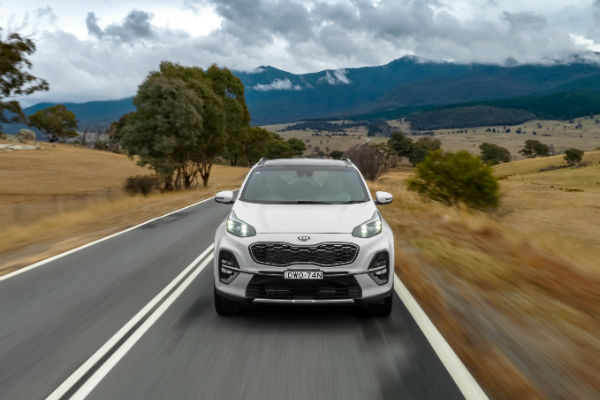 An update to the Kia Sportage SUV this week – this medium-sized SUV in one of the hottest market segments has received an update, mostly under the skin and a lengthy drive on demanding country roads this week showed it’s a big improver.
Mainly in ride and handling where Kia suspension engineer Graeme Gambold has really worked his magic. Visually its little different, a little more masculine up front perhaps while the diesel model now gets an 8-speed gearbox, petrol versions retaining six-speed units. Autonomous emergency braking and Lane Keep Assist have also been added to what is a comprehensive standard equipment list. The Kia Sportage comes in four trim levels Si, Si Premium, SLi and GT-line with a choice of three engines depending on model – 2.0-litre and 2.4-litre petrol and 2.0 litre diesel – and again depending on model a choice of front drive and all-wheel-drive. Prices have lifted from 1000 to $1700- starting from $29,990 and running to 47,690. And of course it gets Kia’s very persuasive seven-year unlimited kilometre warranty.
Interestingly the Kia Sportage sits on the same platform as sister company Hyundai’s Tucson SUV but feels smaller inside. The entry Si with 2.0-litre engine lacks a little performance sparkle compared to the 2.4 petrol and strong 2.0-litre diesel however the equipment list is most comprehensive with dual-zone climate control and rear vents, a rear view camera, rear parking sensors, cruise control and 17-inch alloys. A much improved model. I’m David Berthon