A police chase in Melbourne’s west has come to a dramatic end, according to a witness to the incident in Footscray.

Steve told Neil Mitchell a suspected stolen BMW crashed into two cars at the intersection of Ashley St and Barkly St in Footscray.

He said police were on scene quickly to arrest the driver and one passenger, when they tried to flee.

“The two occupants of the BMW tried to run off down an alley way and the cops grabbed them and cuffed them,” Steve said.

“It looks a bit like a war zone, there’s bits and pieces of the cars strewn all up and down Barkly St.” Chris said he was in his backyard when he heard ‘what sounded like a massive car accident’.

He said he saw police with guns drawn on his own security camera vision.

“They had about four or five plain clothes guys there, cars pulled in blocking the drive way and two scruffy looking people on the ground getting handcuffed, screaming and yelling,” Chris said.

Victoria Police say a 25-year-old man and a 24-year-old woman were arrested about 10.30am as part of an ongoing investigation.

Click PLAY above to hear Steve or below for Chris 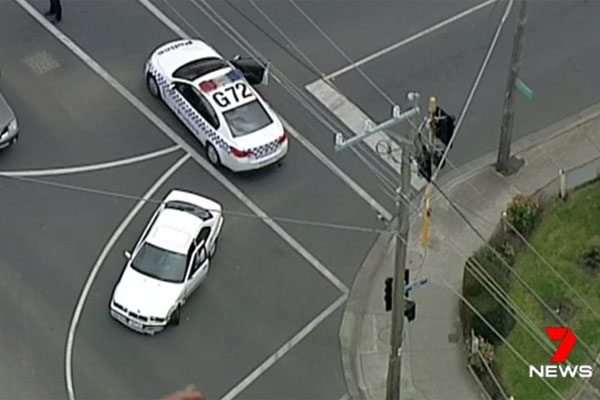