A leaked transcript shows Donald Trump’s first phone call with Malcolm Turnbull shows the US President apparently praising the Australian PM by saying “you’re worse than I am”.

The transcripts of that conversation and a call with the Mexican president have been published by the Washington Post.

“I think this will be a front-pager. It’s a big one. It’s getting a lot of play”: Click PLAY above for Bob Tarlau’s full report to Ross and John from the US about the transcript

Mr Trump’s admiration seems to turn to frustration later in the call when he complains about the deal, and says his call with Russian president Vladimir Putin was better.

But the transcripts do not indicate Mr Trump hung up on Mr Turnbull.

Ross: I’ve read the entire transcript. I didn’t get the impression of it that he hang up.

Washington Post journalist Callum Borchers said the fact there has been a leak is just as damaging for Mr Trump as the content.

“The president has been on the war path against leaks basically since got into office, and it continues to be a big problem for him,” he told Ross and John.

Click PLAY for his full conversation with Ross and John 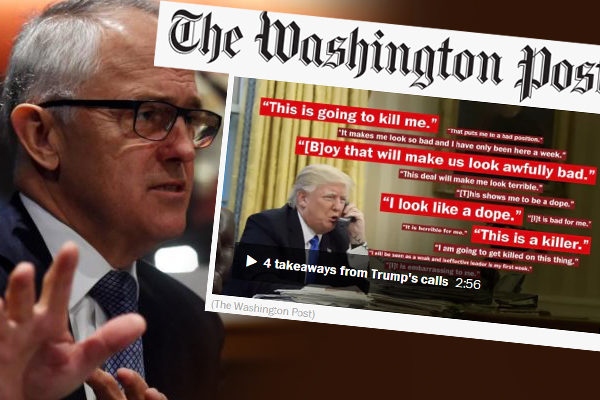