Australian water ways are on the brink of being declared free of a devastating virus that’s cost the prawn industry tens of millions of dollars.

White Spot Disease was first detected in late 2016, eventually forcing seven farms on Queensland’s Logan River to destroy their stock, sending them out of production for a minimum of 18 months.

But the latest round of surveillance testing in a number of locations within the Moreton Bay, Logan, and Brisbane rivers has returned negative results.

“It’s a weight off our shoulders to be honest,” Mr West said.

“There was a lot of international experts saying this just can’t be done, you can’t eradicate this stuff from the environment, but there’s still a long way to go.”

If further surveillance testing in 12 months time doesn’t find any traces of White Spot Disease, Australia will be declared free of the virus.

It doesn’t pose a risk to human consumption, as farmers continue to encourage us to buy local produce.

Biosecurity measures are in place to protect Logan prawn farms, including a ban on line fishing around the inlet and outlet channels to properties.

Hear the full interview below, as Matt West details how the recovery process is going. 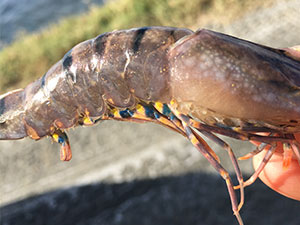