At a point where the ever-extendable Star Wars franchise looked at risk of relying too much on its own legacy and table of cliches along comes The Last Jedi to push the saga into fresh, delightfully dangerous new territory that is enthralling in scope and compelling in nature as the tension between good and evil is brought to a mesmerising pitch.

This major refreshing of the franchise comes courtesy of little-known writer-director Rian Johnson (Brick; Looper) who has moved the story beyond the cartoonish action and narrative rehashing  we got with the previous two films.

The Force Awaken (2015) – the first film of the third trilogy, taking place 30 years after the events in 1983’s Return of the Jedi – was essentially a suped-up carbon copy of the first film as the new-generation rebels, now known as The Resistance, fought off yet another Death Star, while Rogue One (2016) was a clumsy, borerline-silly prequel to the original film designed to explain how a single rebel fighter could destroy an entire Death Star.

There’s none of that stumblebum storytelling in The Last Jedi, which (a few, well-judged gags aside) adopts the no-nonsense dramatic tone we saw in Empire and the underrated Revenge of the Sith (2005; the fouth-best Star Wars film after Last Jedi.)

Taking place almost immediately after the events of Force Awakens we find the Resistance all-but-overwhelmed by the New Order (formerly known as the Imperial Forces, aka the Empire). Its fleet of megalithic ships – and, boy, do you sense their daunting size here! – have located the Resistance on a small planet and is chasing them down, essentially waiting for them to run out of fuel.

Lead by Princess Leia – actually, it’s General Leia but somehow that doesn’t feel or sound right – her rag-tag army desperately try figuring out a way to survive what appears to be unavoidable doom.

Complicating things is that Leia (played, of course, by Carrie Fisher in her final film role – and what a fitting coda it is to her chequered, sporadically brilliant career) is being chased down by Kylo Ren (Adam Driver), the son she had with Han Solo, who Ren killed in the previous film, an act that gave the series one of its best moments.

Ren answers to the all-powerful, incredibly ugly Supreme Leader Snoke (Andy Serkis) who suspects that Ren’s submission to the Dark Side is still a few percentage points short of completion. He’d like to see total commitment from his protege.

While this cat-and-mouse chase through space is going on, Rey (Daisy Ridley) is on a dramatically pointy island with aged Jedi Luke Skywalker (Mark Hamill) trying to get him to teach her the ways of The Force.

He is reluctant to, but his motives go far beyond the curmudgeonly theatrics of Yoda in Empire – and this is where the story of The Last Jedi really upshifts into A-grade drama. Luke’s belief is that, while The Force is eternal, it might be time for the Jedi to die and be replaced by something better.

Rey, desperate to be trained and get back into the fight, is mystified by this apparent defeatism. She also receives disturbing signs that Kylo Ren, merciless as he is, might be a candidate for redemption just like Luke and Leia’s father, Darth Vader, was.

This all makes for grand, entertaining, exciting stuff.

Thanks to very good performances and strong dialogue, Johnson grounds the story of The Last Jedi in a bedrock of themes about moral choice, the nature of defiance, self-sacrifice and spiritual renewal. Those looking for a religious interpretation might well find The Last Jedi one of the most Catholic films they’ll ever see.

And it’s the drama that makes the film work as brilliantly as it does. The film contains some great twists and a clutch of magnificent moments that offer incredibly satisfying payoffs to tensions that have been meticulously built.

In terms of the film’s dazzling visuals, the usual benchmark-setting spectacle is complemented by some great cinematography that echo the grandeur of old-school epics.

While the film’s frenetic action is splendidly edited, Johnson and cinematographer Steve Yedlin have taken special care to occasionally allow your eyes to appreciate the visions they’ve conjured.

By holding a shot for a precious extra two or three seconds you get to take in the beauty of a landscape, the complexity of a space battle, the destructive power of a death ray or the awesome scale of a giant space cruiser in all its photo-realistic glory. Sometimes the detail is so rich and vivid you’ll feel like you can reach out and touch them. Who needs 3D?

Still, to be completely honest, there persists one annoying Star Wars story hole that we hopefully will not see again after this film.

Having now lost three – count them, three – Death Stars because of design flaws that allow a small band of rebels to infiltrate their defences, you would have thought by now that the New Order’s ship designers would take these very expensive lessons into account when designing its giant battle cruisers.

Yet in The Last Jedi we again hear how the small size and speed of rebel ships are still a huge problem. This, regrettably, accounts for a rather weak opening action sequence where a gigantic ship is vulnerable to the fury of a tiny Resistance fighter.

Things improve quickly after that as the Resistance’s encounters with the New Order become ever more costly and its chances of survival grow ever slimmer. So, given that and how good the rest of the film is, it’s an easy flaw to forgive, and it’d be great if we heard in the next film how the bad guys on big ships can now target small fighters with pin-point accuracy and blow them away.

Finally, one of the truly wonderful things about The Last Jedi is its sheer unpredictability. Over and over, things are brought to a knife’s edge where you don’t know what the next moment will bring.

And so it is with the film’s fabulous finale, which leaves you with little idea as to how the next film will proceed. One can only hope it will be as full of drama, action and surprises as The Last Jedi.

Immediately after the premiere screening in Melbourne this evening, Jim joined Phil and Simon on Nightline to review the latest episode in the Star Wars saga.

Never one to hold back, listen to Jim make his opinion well known. 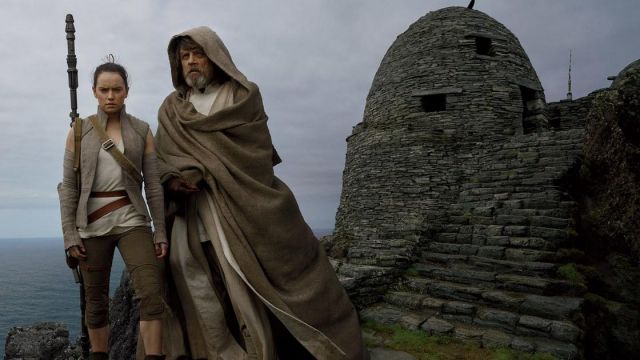