The notice, featuring a City of Greater Dandenong letterhead, has been dropped in letterboxes since late last week.

It forewarns of 10 new by-laws, including:

Greater Dandenong Local Area Commander Inspector Mark Langhorn told Ross and John the letter has been posted online, and the comments on social media are a concern to police.

“Some people can see through it.

“I’ve got the understanding it even reached Bob Katter’s office up in Queensland.

“Some people latch onto these things and they’ve contacted the council in outrage.”

The letter says the by-laws are due to the increased number of Muslims in the area. 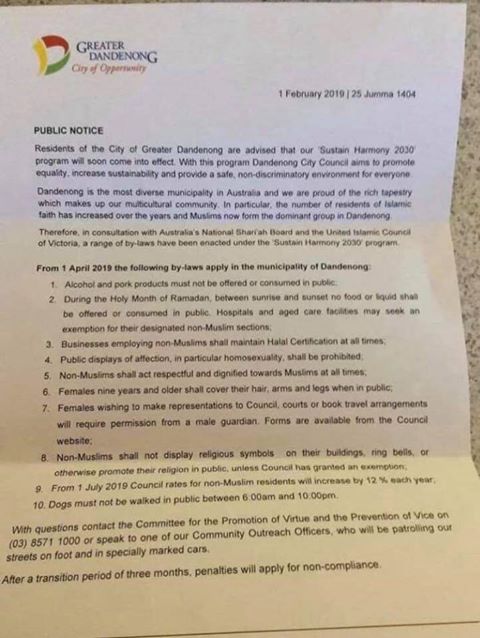 Police have called for public help to catch the author of the “fake and offensive” letter.

They believe the letters were placed into residents’ letterboxes and been circulating the southern suburbs since late last week.

“Every Victorian has the right to feel safe and secure in the community and in practising their faith, pursuing their values, beliefs and interests,” Inspector Langhorn said.

“We treat all crime seriously, including those that attempt to incite prejudice, racism or discrimination in our community.”

Anyone with information can also contact Crime Stoppers on 1800 333 000 or submit a confidential crime report at www.crimestoppersvic.com.au