Police have established a new taskforce to hunt down the thugs suspected of assaulting police and spitting on bystanders during recent anti-lockdown and anti-vaccination rallies.

Detectives from Prime Taskforce, the unit established to investigate criminal offences committed at the recent protests, have released images of several suspects wanted over assaults on police, criminal damage to police vehicles, incitement.

Police want to speak to five males (including the three pictured left, centre right and right above) in relation to incidents at the protest in Richmond on 18 September.

Among those being sought is a man in an orange t-shirt (below) suspected of spitting on a woman who was stuck in her car as thousands of protesters took over the Westgate Bridge on September 21. 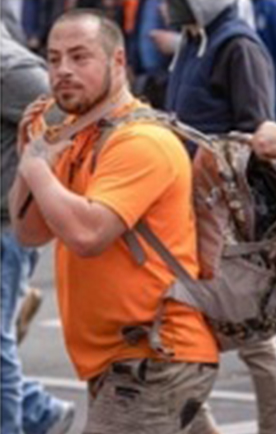 Several other male suspects are wanted over attacks on police vehicles at Carlton on the same day.

Press PLAY below to hear more from police

Anyone who recognises any of the men pictured is urged to contact Crime Stoppers on 1800 333 000 or submit a confidential crime report at www.crimestoppersvic.com.au