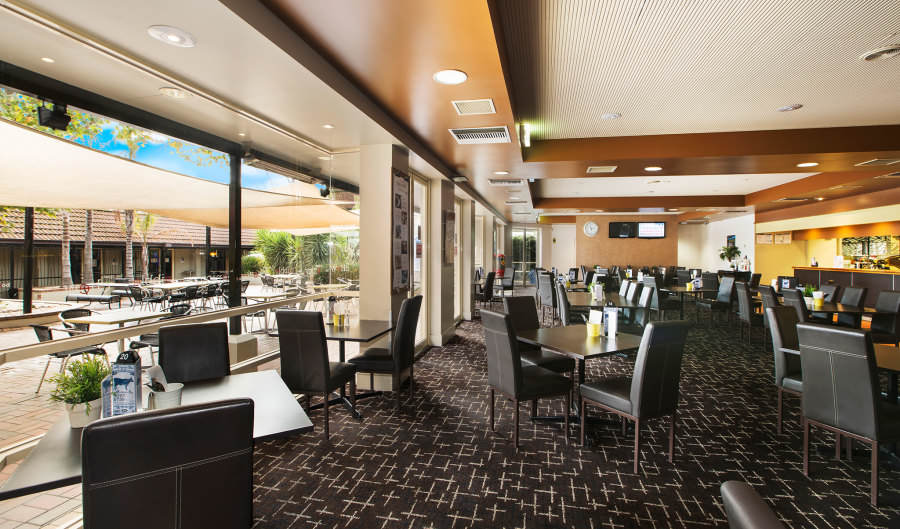 Another part of the gigantic ALH portfolio, the Deer Park Hotel is located in a metaphorical no man’s land somewhere between the Western ring road and Deer park/station rd proper, devoid of any residential but a big suburb only 1-2kms away.

To that end it’s basically drive there and back.

The pub looks a little weather beaten from Ballarat rd, a mix of spanish villa and old public school but this look appeals to me; I like a little worn around the edges with my pubs. There is a central communal beer garden/quadrangle  in the middle of the pub which is a great feature.

Massive sports bar faces the main road, smallish comfortable dining room to the rear of the bar and a totally separate pokies room. This is suburban publife 101 with meal deals, merrie melodies, sports events being the focus.

The DPH has an exclusive 100 schooner club with an exclusive polo shirt, honours board (legendddd), and invitations to exclusive events (more schooners?). Seniors deals where 2 courses, sets you back $12.

Having been to most ALH pubs in Melbourne the DPH sits in the middle. This homogenised offer is repeated right throughout the suburbs so you know what to expect.

Smaller menu by comparison to other ALH pubs dotted with some specials such as Pork cutlet, choice of sides in a creamy mustard sauce (24), Rib Eye, 400g fully plated $37, or fettucine carbonara (19) to which you can add chicken (4) if that’s your thing. Swordfish was the fish special, Lamb the roast.

Entrees are mainly breads and potato although amazingly Quebec poutine – chips topped with bacon, melted cheese and chili mayo (not sure how close to the original this is) makes an appearance.

Classic Beer battered Fish and Chips.  Hmm. $18. As an exercise it is always worth asking what type of fish is used. Well it may have been flake/hake, no it’s blue grenadier but we finally settled on flathead. 2 big fillets arrive, great batter, crisp, but the fish lacking any real flavor. Big pubs need to be on top of this as if frozen for too long, the flavor goes and then it becomes a dish of, well, food stuff, I suppose.

Beer and wine sticks to the Carlton/Treasury  portfolio. Carlton D ($4.8) was the choice and  credit to the pub was very good. The wine list is very small but $7/gl//$30 bottle will  buy a safe and known brand. Franklin Tate chard at $6.5/glass did the trick.

No problems here.  Quiet day at the DPH, it was the standard drill of order at bar and  deliver to the table. The manager of the bistro was doing her job.

While the DPH delivers what most pubs of this ilk do – big pokies, big TAB etc., there was something endearing to me about the place, most noticeably the beer ‘quadrangle’ sitting between the dining room and pokies area: a sort of small town centre.

Like most of the ALH’s pubs, the template is well established so you look to the small things around the edges that denote some form of difference. Outside of the look, you have probably had this before from your bigger hotels. The DPH sits right in the middle of suburban hospitality, best summarised as doing its job.

In closing, the DPH years ago, (25+say)  had the legendary Phone Box Disco, a primitive version of Tinder where you had a phone at your booth and would ring someone situated nearby and asked them for a drink or a dance.  Rejection as a rule followed I’m told, but what ingenuity!!. Screamingly popular, West Coast Cooler or Drops on the Rocks was the nectar of love.

Something so silly just may catch on again.